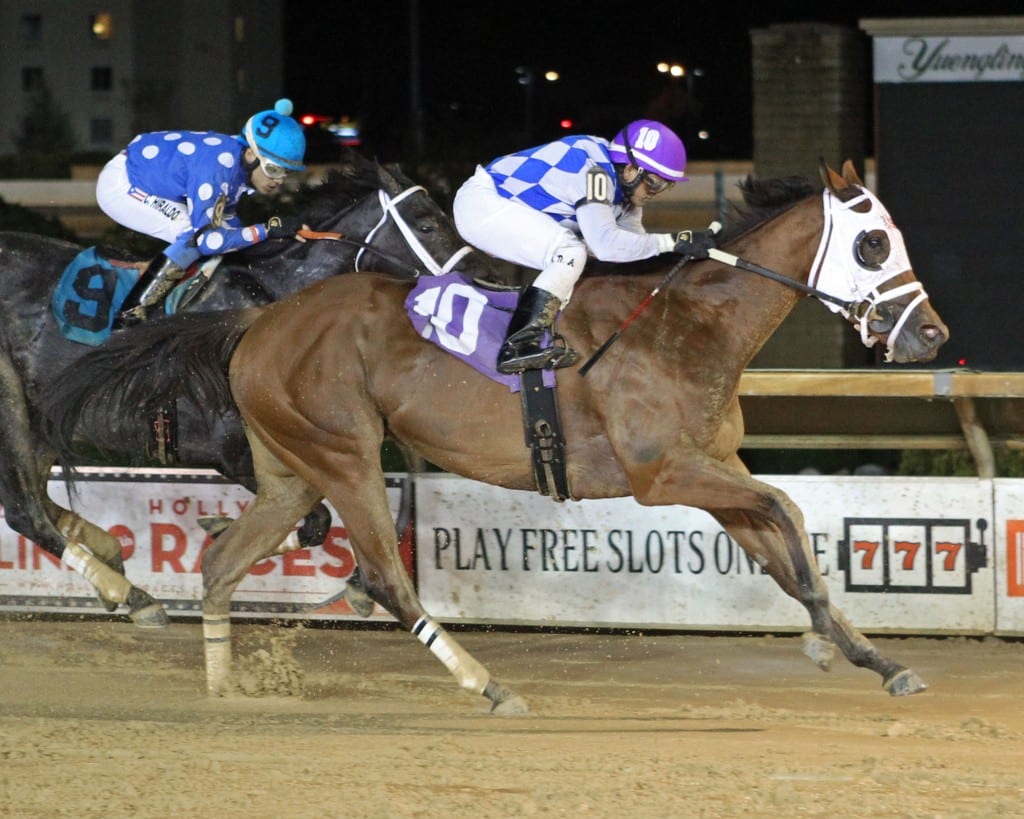 Though a full gate of 10 runners faced the starter in Saturday’s Fancy Buckles Stakes at Charles Town Races, bettors determined it was in actuality a two-horse race.

They were correct, it turns out.

Under J. D. Acosta, Noblame, the 2-1 second choice at post time, scored a mild upset, besting 1-2 Moonlit Song by three-quarters of a length in the $50,000, 4 1/2-furlong test for West Virginia-bred fillies and mares.

With the win Noblame, now has five wins from eight starts with career purse earnings of $146,110. A three-year-old Blame filly, she has three wins and a second from four starts at Charles Town. This one was perhaps the most impressive of the lot, since she stepped up to face older rivals, including the best local distaff runner in Moonlit Song.

When the gates opened, longshots Party N the Palace and Remy’s Rocket were quickest away, with the former leading the field through an opening quarter-mile in 21.89 seconds over a sloppy, sealed track.

Nearing the lane, the leaders drifted out, opening a yawning hole at the rail for both Noblame and Moonlit Song. Those two shot through the hole, Moonlit Song initially seizing a slight advantage before Noblame surged to command late to win by three parts of a length in 52 seconds flat. It was another length-and-a-half back to Remy’s Rocket, who barely held third over the late-running Jacky’s Notion.

Noblame is trained by Joe Sharp for Wayne Sanders and Larry Hirsch, who paid $50,000 at the Keeneland September sale for her in 2016. She was bred in West Virginia by James Miller, Jr. She is undefeated at Charles Town in 4 1/2-furlong dashes, her lone defeat coming at the two-turn distance of 6 1/2 furlongs.

While the loss was likely a disappointment to Moonlit Song’s trainer-owner-breeder Tim Grams, as well as his wife Judy, it also, Grams said prior to the race, was her last try at a one-turn distance locally for the season. Moonlit Song has enjoyed her greatest success going two turns, including winning the West Virginia Breeders Classic Cavada last fall, and will, if all goes to plan, look to defend that title.