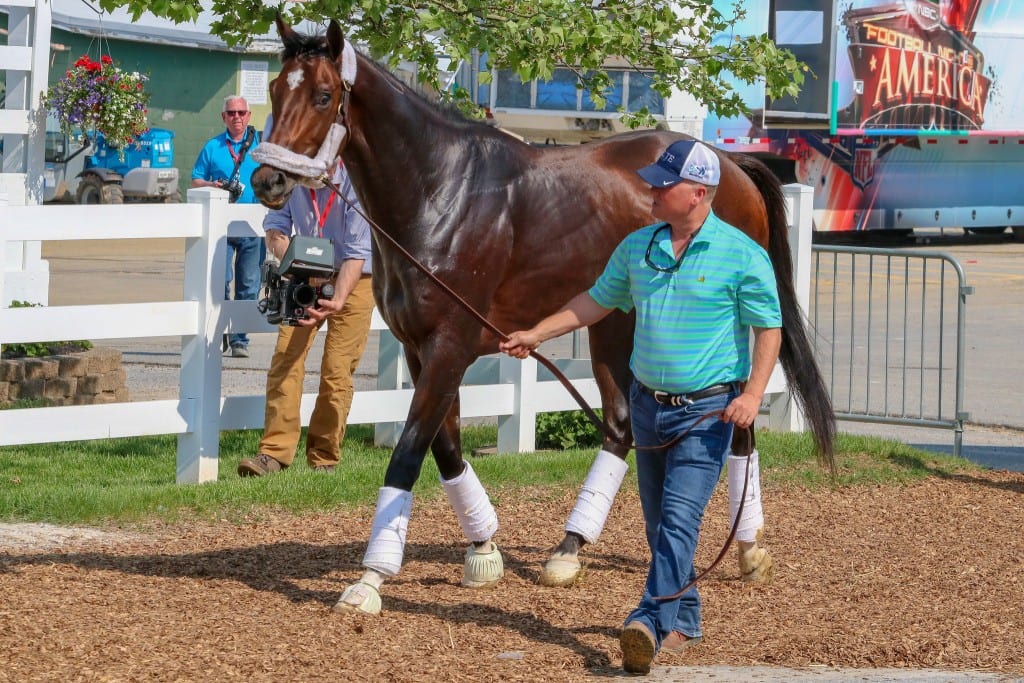 The lightly raced Tenfold saw his two-race, career-opening win streak snapped last out when fifth in the Grade 1 Arkansas Derby, a race in which he finished up in a four-horse photo for the minor awards behind easy winner Magnum Moon. Trained by Hall of Famer Steve Asmussen, Tenfold is a son of Curlin out of a Tapit mare.

WHAT THEY’RE SAYING ABOUT TENFOLD

“I don’t know if there is a 3-year-old around that is better bred for the Belmont than he is,” said David Fiske, bloodstock manager for owner Ron Winchell. “He’s by a horse that lost the Belmont by a nostril and is one of the top sires in the country. And he’s out of mare by arguably the best Belmont sire ever.”

He added,  “I think Steve’s (Asmussen) already said that we’ll get some read on where our guy fits in the universe of 3-year-old colts this year. Typically, you don’t run away from a race that has one standout. That’s not to pooh-pooh last year’s 2-year-old champion (Derby runner-up Good Magic). But it would be OK just to get some black type (by finishing in the top three) in a classic. It’s mostly the timing from the Arkansas Derby, and I think he’s blossomed a bit since the Arkansas Derby.”

Fits the mold of non-Derby starters who have won the Preakness. Over the past 30 years, only three colts (Cloud Computing in ’17, Bernardini in ‘06, and Red Bullet in 2000) have won the Preakness without having raced in the KY Derby. The former two both did it in their fourth career start, and Red Bullet did so in his fifth. Tenfold has only raced three times, winning his first two races then most recently was fifth in the Arkansas Derby (G1). Trainer has won the Preakness twice… Curlin (2007) and Rachel Alexandra (2009). “He’s a very nice horse that is getting better,” Asmussen said. “We’re expecting big things from him. I was a touch disappointed (in his Arkansas Derby). He’s better than that.”

Putting his toughest race, the Arkansas Derby into perspective, he finished four-and-one-half-lengths behind the winner who finished in nineteenth-place in the KY Derby. His best Brisnet speed figure is a 94 which is the lowest among his rivals in the Preakness.