Preakness: “Won by exceptional Thoroughbreds,” wherever it goes 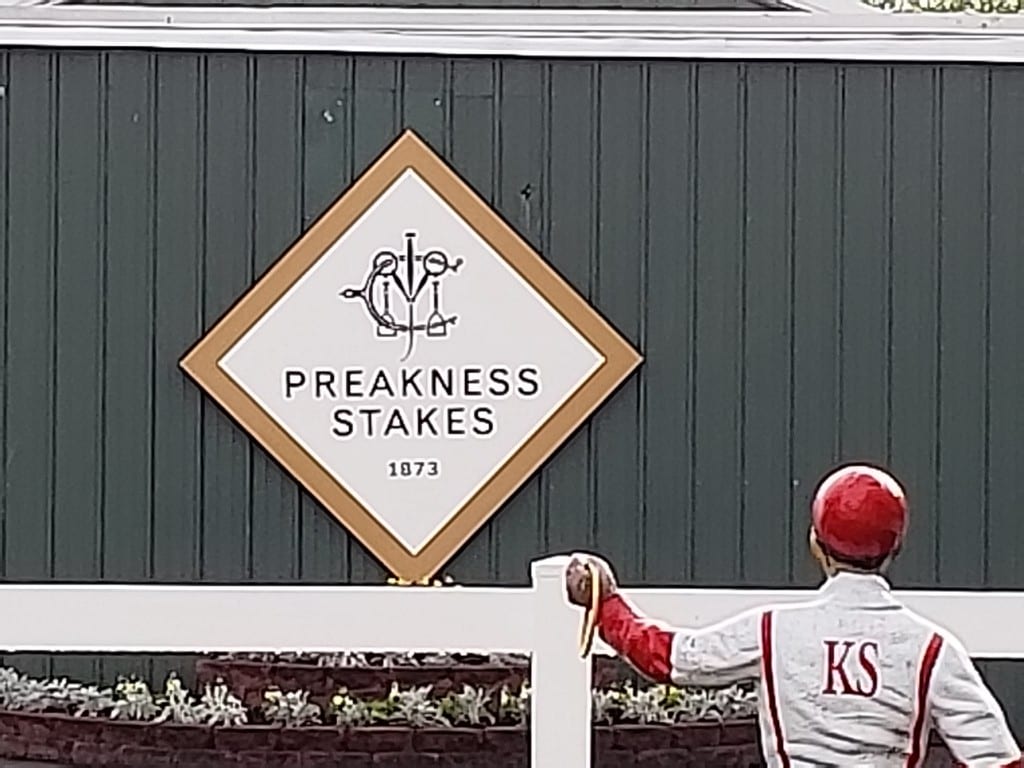 One version of the first Preakness date. Photo by The Racing Biz.

According to the Maryland Jockey Club’s logo for the feature race at Pimlico this Saturday, this year is Preakness 143. That would mean that the first edition of the race was run in 1873, when Survivor won it. (1918 counts twice, because there were two divisions that year.)

Fourteen years later, the DRF revised its account, printing that the Preakness was first run in 1909.

And there are some observers, like racing historian and Mid-Atlantic dweller Kevin Martin, who might argue that this year is actually Preakness 127.

Are you still with me?

So just what is the dealio with the Preakness?

Let’s go way back to 1868, and to Saratoga Springs, New York. It was the fifth summer racing meet, and Maryland Governor Oden Bowie had ventured north for a little gambling and socializing. At a dinner party hosted by Milton Sanford, who ran in the name of Preakness Stables (named for a community in Passaic County, New Jersey), presumably after a successful day at the windows, Bowie decided that it would be pretty cool to have a racetrack in Baltimore, and two years later Pimlico opened. The feature race? The Dinner Party Stakes. (It, too, is still around, now known as the Dixie, and it, too, apparently has a checkered history. But that’s another story.)

The winner that first year? A horse named Preakness.

Know who finished last that year? A filly named My Maryland.

Three years later, a race named for Preakness debuted at Pimlico, and the rest, they say, is history. Sure. Easy for them to say.

In 1889, the Baltimore Sun, in an article with a sub-headline that read, “Abuse of a Noble Sports by Tracks Adjacent to Other Large Cities…The Past Glories of Pimlico,” reported that Governor Bowie, who was also the president of the Maryland Jockey Club, had written to members of the club to inform them that the Maryland Agricultural Society had taken possession of Pimlico following the expiration of its lease, and that the MJC would no longer hold race meetings there.

But why? Bowie’s reason might sound familiar: competition from other racetracks that made it difficult to attract horses to Pimlico. Since Pimlico had opened, a number of other tracks—Monmouth, Brighton Beach, Gravesend, Sheepshead Bay — had also been established. The number of days the New York tracks could run was limited by state law, but two tracks in New Jersey, Clifton and Guttenberg, were under no such restrictions.

“With the much larger purses…given by most of the Eastern associations than we could possibly afford to offer, owners could not be induced to take the expense and a risk of traveling their horses to and from Baltimore…” wrote Bowie. “With racing going on almost every day in the year throughout the racing sections…we felt previous to our last spring meeting that its success was extremely doubtful.”

That spring meet did indeed come off, but not the one scheduled for the fall of 1889. Wrote Bowie elegiacally and regretfully, “With the memories that cluster around Pimlico of such deceased owners as the noble Sanford, the originator and winner of our first and famous ‘Dinner Party Stake,’…we could not bring ourselves to depend in future upon owners of less character and only inferior horses…”

That same year, Morris Park opened in what is now the Bronx. Called by the New York Times “the finest racetrack in the world,” in 1890 it offered for the first time a race called the Preakness Stakes. Neither the Sun, nor the Times, nor the DRF makes any mention of the Pimlico race being transferred north. The Preakness simply disappeared from Maryland and appeared a year later in New York City—open to horses three years old and up.

The winner that first year? A five-year-old called Montague.

His owners? None other than Mr. Sanford’s Preakness Stables.

Over the next three years, there is no record of a Preakness having been run at any track in any state. When the Preakness returned in 1894, it was run not at Pimlico, not at Morris Park…but out in Brooklyn, at the old Gravesend track, and it was at Gravesend that the erstwhile peripatetic race found a home for the next 14 years.

(Know who won the 1895 Preakness? A horse called Belmar. His owners? Yup.)

With as little fanfare as the Preakness departed Maryland, it returned in 1909—which is why, one supposes, that 1922 DRF established that year as the birth of the Preakness, when in fact, the 1909 Preakness was either the 34th running (if you count the New York races) or the 18th (if you don’t). The DRF did note in an April 1909 story the return—excuse me, “the revival”—“of the famous old Preakness Stakes, which…was discontinued when Pimlico lost its prestige as a racing point.” It was the feature race on closing day, May 13, and the Sun reported that the Jockey Club of New York — yes, New York — “gave plate of $500 to the winner.”

No less a turf writing luminary than Joe Palmer asked of the Gravesend Preakness, “Was it the same race, or were there two Preaknesses, or, as our Mr. Smith puts it with his Latin flair, Preaknii?” Kent Hollingsworth, too, interrogated the history of the race, at the same time offering a critique of a now-beloved Preakness tradition, tempering his acerbic observation with a pronouncement over the wisdom of which there can, unlike the history of the Preakness, be no dispute.

“…the traditional wreath of daisies painted like Black-Eyed Susans will be placed on the 92nd winner of the Preakness in front of a small replica of the Old Members’ Clubhouse cupola which burned last year.

“These sorts of traditions are made, not born. They are unnecessary embellishment of one of America’s great races.

“There really is only one tradition, good and true, attaching to the Preakness: This is a race, for years beyond memory, won by exceptional Thoroughbreds.”

Further reading on the history of the Preakness: