Happy Like a Fool gallops in Miss Preakness Stakes 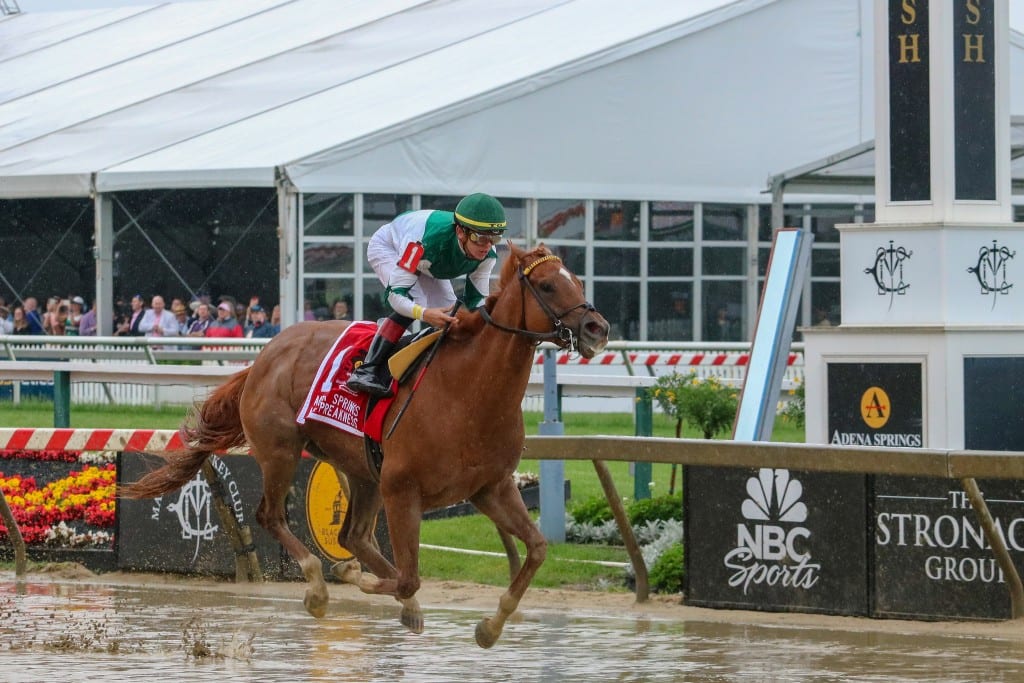 The 33rd running of the six-furlong Miss Preakness for 3-year-old fillies marked the third win from four U.S. starts for Happy Like a Fool ($10.40) and second in a graded stake. She also captured the Matron (G3) in her stateside return last fall at Belmont Park.

Jockey Tyler Gaffalione, riding for trainer Wesley Ward, sent Happy Like a Fool to the front from their rail post, leading through a quarter-mile in 23.06 seconds and a half in 46.13, tracked by previously undefeated Artistic Diva on her right flank. After going five furlongs in 57.90, Happy Like a Fool opened up once straightened for home and hit the wire 6 ½ lengths in front in 1:10.12 over a sloppy and sealed main track.

The running time of 1:10.12 was a fifth faster than older fillies and mares managed the same distance two races earlier in the Skipat Stakes.

Artistic Diva stayed up for second, three-quarters of a length ahead of 30-1 long shot Buy Sell Hold. Bootsy’s Hadenough was fourth.

Happy Like a Fool debuted with a four-length win at Keeneland last April, then spent the summer in England where she ran twice, finishing second in the Queen Mary Stakes (G2) at Royal Ascot and sixth in the Sky Bet Lowther Stakes (G2) at York prior to the Matron.

Photo of Happy Like a Fool by Dottie Miller.

“She broke really well. I just chased her out of there to get position. When I asked her at the top of the lane, she really responded. (Trainer) Wesley (Ward) did a good job of having her ready. It’s pretty sloppy; it’s not the worst thing and she could handle it. You have to pay attention to the [track] bias. It seems like it is changing every race. One race is speed, then another race they are coming off the pace. It’s pretty fair – you just have to pay attention.”

Longshot Buy Sell Hold, off at 34-1, was squeezed back soon after the break, found herself well off the lead, came five wide and rallied for a good third, missing second by less than a length while four clear of the rest.