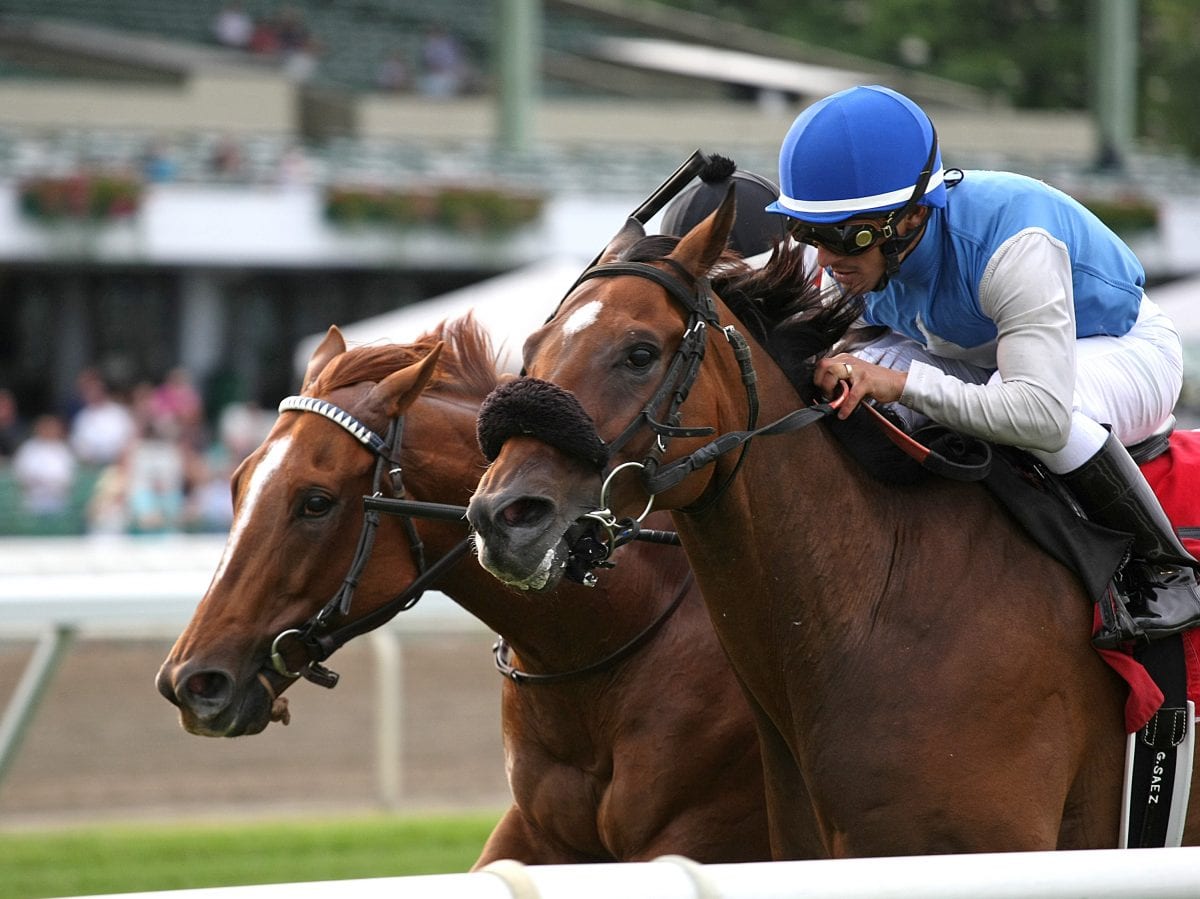 Oak Bluffs (inside) won the 2015 My Frenchman Stakes at Monmouth Park. Photo By Ryan Denver/EQUI-PHOTO

Intermittent rains in Baltimore — with plenty more predicted — have left everyone in racing on edge, perhaps none moreso than those trainers and owners with horses scheduled to run in turf races.

Take the $100,000 Jim McKay Turf Sprint. Set to go on Friday, May 18 as race 10, the fixture, which is also part of the Mid-Atlantic Thoroughbred Championships (MATCH) Series, has drawn a field of 10 salty grass speedsters. But it’s just four years ago that the McKay, driven off the turf, scratched down to five, leaving the great Ben’s Cat a dominating winner.

“I don’t know,” trainer Mary Eppler said plaintively when asked whether her charge, the eight-year-old Oak Bluffs, would face the starter. “Just depends on the weather. It’s been terrible.”

Oak Bluffs, scheduled to have Paco Lopez in the irons, loves the turf, having won 11 times and earned over $340,000 on the green stuff. But he’s also won four of his eight starts on the main track, leaving Eppler with a conundrum. If it comes off the turf, do you stay in?

For that matter, what if it stays on a turf course rated soft or yielding?

“I don’t think he likes soft turf,” she said. “But Paco loves him and says he’ll be fine on it.”

Lopez has ridden the New Jersey-bred Defrere gelding in three of his last four starts, a win against starter allowance company and a pair of second-place finishes, one in a Claiming Crown race and the other in the Gulfstream Park Turf Sprint. All are part of what amounts to a late-career renaissance, in which Oak Bluffs has demonstrated the best form of his life.

“I do think Palm Meadow was a big help,” Eppler said, referring to the south Florida training center. “I think he loved the surface there.”

Eppler owns a house near that facility but hasn’t had horses there since 2010, she said, keeping her string close to home at Pimlico Race Course. This winter, though, she sent some, including Oak Bluffs, down there and enjoyed some success. In addition to Oak Bluffs, who posted a win and three runner-up efforts over the winter, the redoubtable Page McKenney won the Old Hickory Stakes at Gulfstream and was fourth in the Grade 2 Hardacre Mile.

It’s been quite a development in a twisty-turny career for Oak Bluffs, who was bred by Patricia Generazio.

Eppler claimed Oak Bluffs from trainer Jamie Ness in late 2015 for the princely sum of $5,000. Since then he has been stakes-placed three times and earned just shy of $180,000.

Eppler laughed when asked if she could have foretold what would come next when she dropped the claim slip on Oak Bluffs.

Indeed, he has. The deep closer is 6-1 on the morning line and has every right to be a major player in this event.

The 2-1 morning line favorite is Hogy. The Mike Maker trainee has done perhaps his best work going farther, including Grade 3 wins in the one-mile Canadian Turf and 6 1/2 furlong Kentucky Downs Turf Sprint. But he’s done plenty of good work at short sprints, too, and has won eight of 21 starts at the trip. Also here is the lightly raced Imprimis (3-1), undefeated in three starts against lesser. And of course, there’s the full-throttle speedster Rocket Heat (6-1) who won an allowance at Laurel Park last out.

But it wouldn’t be wise to ignore Oak Bluffs — if he posts.

“He can be tough, too,” said Eppler. “If there’s enough pace, he’ll come running.”