Preakness Past: The disappearing Big Brown 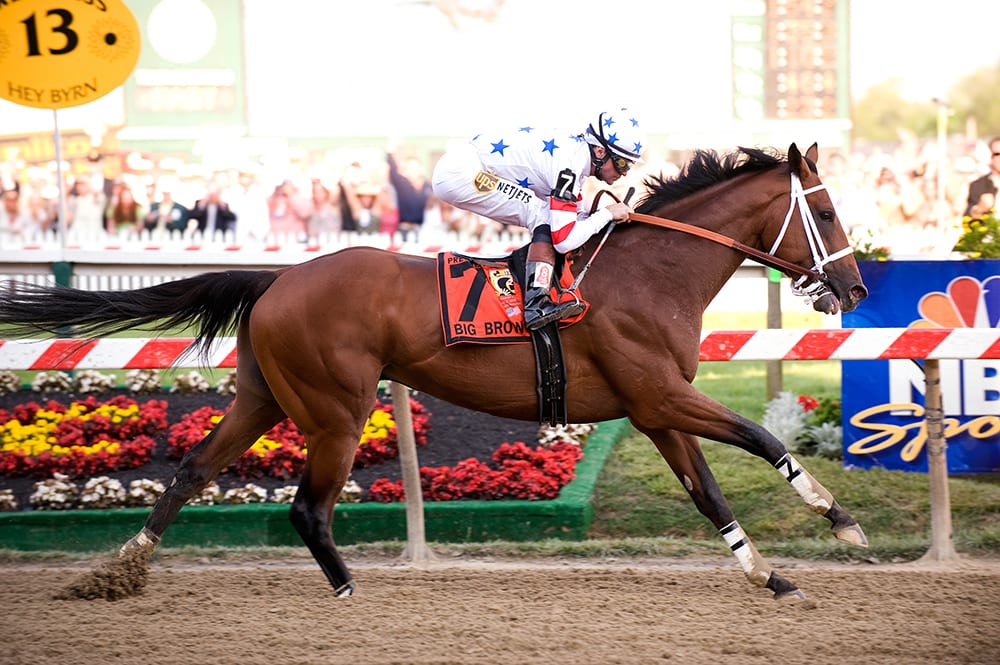 Our 2018 Ghosts of Preakness Past will feature stories of eight editions of the Preakness from the last 40 years. Today, 2003 and Funny Cide, the gelding who captured the nation’s affection.

In the spring of 2008, a strong bay colt campaigned by IEAH Stables came into the Preakness Stakes with a chance to be racing’s next big thing. That colt was named Big Brown, and on the first Saturday in May, he added his name to a list of only seven horses to win the Kentucky Derby with an unblemished record. A perfect 4-for-4 following his win in Kentucky, the Derby hero was looking to keep his winning streak alive as he continued his bid for the Triple Crown.

From the start of his career, Big Brown displayed nothing but raw talent and potential. He broke his maiden, won an allowance, and took down the Florida Derby and Kentucky Derby, all by daylight. The colt’s passion for running and competitive nature suggested that his run in the Preakness would be no different, and the world of thoroughbred horse racing was watching closely.

When the gates opened, Big Brown and regular rider Kent Desormeaux broke swiftly and immediately raced into a stalking position. The fleet-footed animal tracked confidently behind the leaders, refusing to let them out of his sight. When the final bend began to roll into view, Desormeaux strategically guided his mount to the outside, setting him right on target for a clear run.

Given his cue, Big Brown began pounding over the ground harder and faster, rapidly rolling the dirt beneath him with each efficient stride. By the time the colt hit the top of the stretch, he had turned the Preakness Stakes into a walkover.

“Big Brown’s doing it again!” Tom Durkin, announcing the race for NBC, exclaimed as Big Brown thundered down the stretch all alone. “He is disappearing from the field! He’s in front by five!”

The applause from the crowd at Pimlico began to reach a crescendo as the undefeated colt blazed down the lane.

“Kent Desormeaux looked in the rearview mirror and nobody was there. He waltzes home to win the Preakness! Nobody’s ever been close to Big Brown!” Durkin added as the imposing animal soared over the wire by 5 ¼ lengths.

“This is the best horse I’ve ever ridden,” Desormeaux, who had nearly won the Triple Crown aboard Real Quiet a decade before, declared to the Associated Press, after his dominating score in Maryland’s biggest race. “I looked between my legs, under my arms, and they were eight lengths behind me. I stopped pushing. I said, ‘That’s enough’.”

Desormeaux wasn’t the only one beaming with pride over his Triple Crown hopeful. Even Steve Cauthen, who had captured the elusive Crown aboard Affirmed at the young age of 18, was impressed by the feat. “Wow is all I can say,” Cauthen expressed in an interview with ESPN, “He looks pretty special. It was like a cakewalk for him. The important thing to me is he keeps passing all the tests.”

The Kentucky Derby and Preakness champion looked primed to become the first Triple Crown winner in 30 years. With his undefeated record and ruthless running style, there was no reason to think that his winning streak wouldn’t continue into the final challenge that awaited at Belmont Park.

In fact, trainer Rick Dutrow Jr., was so confident in his horse that he firmly stated, “I know we have horse left. There is no question. He’s just shown up every step, every way. I just can’t imagine him not showing up for the Belmont.”

Then, three weeks later, the unimaginable did happen.

When the field turned for home in the Belmont Stakes, Big Brown was nowhere in sight. The once unstoppable colt was found toward the back of the field, struggling to make an impact. The crowd at Belmont Park watched in stunned disbelief as Desormeaux pulled up his enervated mount, and 38-1 longshot Da’ Tara, stole the show. It was an unnerving sight to see a horse that once dominated his rivals so easily, give in to such ignominious defeat. But for whatever reason, Big Brown had finally met his match.

Big Brown’s lackluster performance became all the more baffling when it was discovered that there were no obvious ailments that could have contributed to his shocking loss. While there is some speculation that a quarter crack that arose between the Preakness Stakes and Belmont Stakes was to blame, nobody can really be sure what happened to the once invincible champion on that fateful day in June.

Da’ Tara’s trainer, Nick Zito, later told The Daily Racing Form, “This game will humble kings, and before honor is humility. No matter what. If you’re around as long as we are, you can’t guarantee anything in this sport.”

Two months after his shocking loss in New York, Big Brown returned to the races. The strapping colt bounced back to form, winning both the Haskell Invitational and Monmouth Stakes, though neither was as easy as bettors figured it to be. The ultimate goal for the colt was a run in the Breeders’ Cup Classic at the end of the year, but an injury to his hoof during a workout put an end to his plans, as well as his career.

Not unlike his run in the Belmont, the aftermath of Big Brown’s career is equal parts puzzling and unsatisfying. The ownership group, IEAH Stables, which promised to revolutionize the game, is out of it altogether, having last run a horse in 2013, according to Equibase. Big Brown’s trainer, Rick Dutrow, is also out of the game, just about halfway through a 10-year suspension he received from the New York State Racing and Wagering Board for an accumulation of rules violations.

Big Brown retired with seven wins out of eight career starts, and earnings of $3,614,500. The son of Boundary was honored as the Champion Three-Year-Old Male in 2008, and currently stands at stud at Irish Hill & Dutchess Views Stallions LLC, in Stillwater, NY.