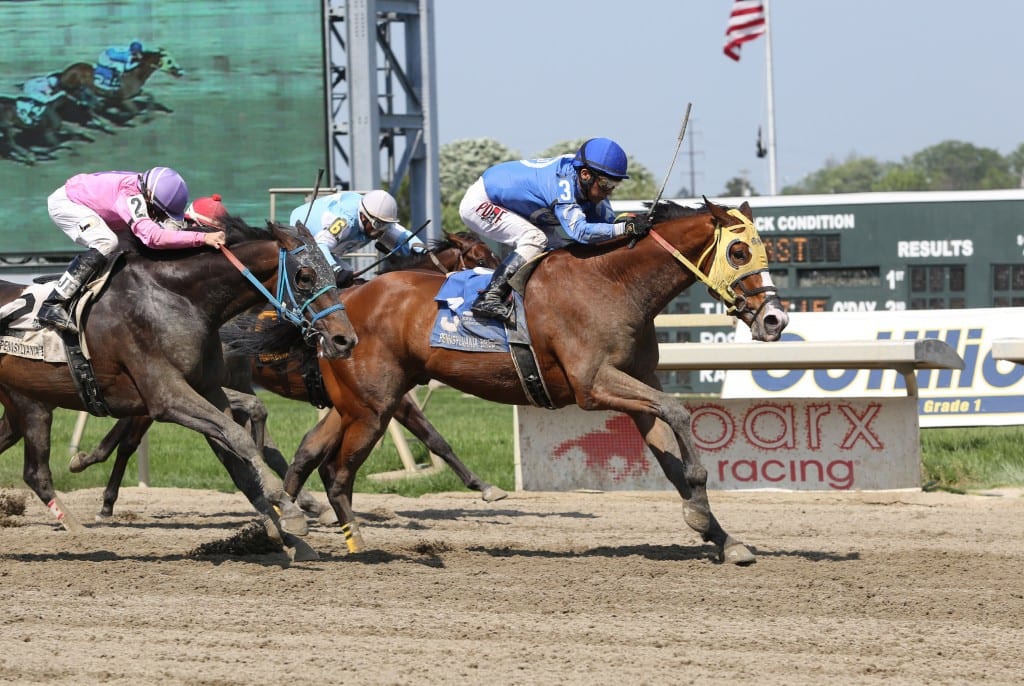 Edgar Prado gets his 7,000th career win, this one coming at Parx Racing aboard Thefundsarelow. Photo By Taylor Ejdys/EQUI-PHOTO.

He achieved his early fame in Maryland, and his greatest fame in New York and anywhere else graded stakes are run.

When jockey Edgar Prado landed his 7,000th win, however, it came at Parx Racing in the most humble sort of race: a $12,500 claiming race for horses that had never won two.

In the sixth race at Parx on May 15, Prado guided Thefundsarelow, the 2.30-1 second choice in the field of seven, to a half-length triumph to earn his landmark victory. It came in the 38,626th start of his career. He is eighth all-time among jockeys by wins.

For Thefundsarelow, a four-year-old Belong to Me colt trained by Philip Aristone for Anthony Merlino, the win was his second in 17 career starts. He stalked the pace from fourth while inside in the one mile test on the main track, eased out nearing the stretch to take command, and then had enough in the tank to hold off a late bid from Extrasexymazzerati.

Prado’s remarkable career has spanned more than 30 years. The native of Peru, nearing age 51, won just nine races in his first season in the United States, 1986. But two years later, he earned his first graded stakes score, piloting Pappas Swing to a win in the Grade 3 Hawthorne Derby.

That was the first of what is now 341 graded victories, the most recent of which came less than one month ago, in the Grade 2, $1.2 million Charles Town Classic. He achieved his widest national recognition with his 2006 win, aboard Barbaro, in the Kentucky Derby. He also has won the Belmont Stakes twice, with Sarava in 2002 and Birdstone in 2004, both times helping to spoil Triple Crown bids. He has won five Breeders’ Cup races, as well, and he earned induction in racing’s national Hall of Fame in 2008.

Prado’s career purse earnings now are nearly $267 million. He is next slated to be in action with two mounts on Thursday at Pimlico and three more on Friday — including with Limited View in the Grade 3 Adena Springs Miss Preakness and Something Awesome in the Grade 3 Pimlico Special.