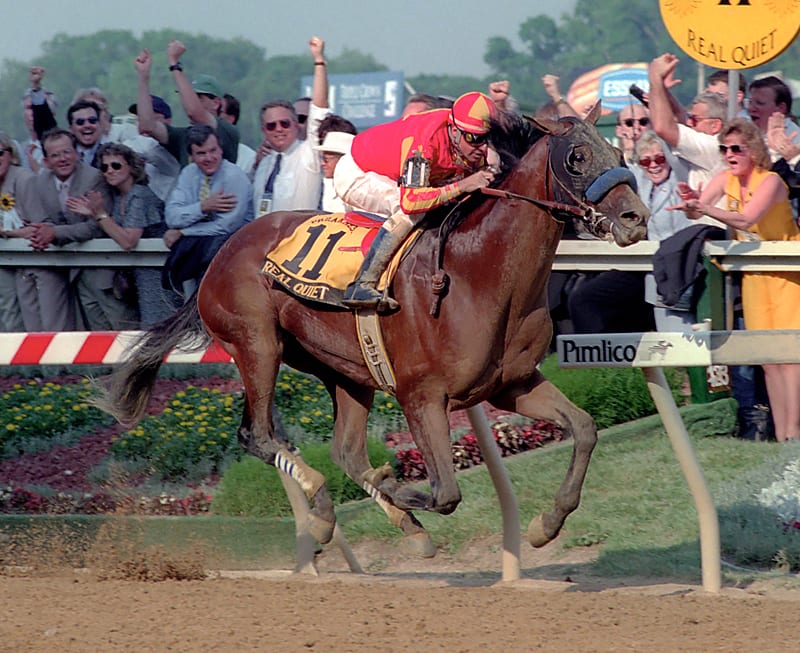 Our 2018 Ghosts of Preakness Past will feature stories of eight editions of the Preakness from the last 40 years. Today, 1998 and Real Quiet, who came so achingly close to winning the Triple Crown.

Bob Baffert came into the 1998 Preakness Stakes with another chance to keep his dream of the Triple Crown alive. The year before, the white-capped trainer had come achingly close, winning the Kentucky Derby-Preakness double in back-to-back thrillers with Silver Charm only to be denied when Touch Gold edged him in the Belmont.

In 1998, Baffert arrived in Baltimore with Derby hero Real Quiet. Owned by Michael E. Pegram and ridden by Kent Desormeaux, Real Quiet was a horse that started out with humble beginnings. Nicknamed, “The Fish” by his trainer because of his narrow body, the bay colt struggled to break his maiden at the beginning of his career. It wasn’t until his seventh try at the age of two that the young horse finally made his way to the winner’s circle. His winning effort was followed up by a decent third in the Kentucky Jockey Club Stakes (Gr.3), and then a winning score in the Hollywood Futurity (Gr.1). However, it wouldn’t be until the first Saturday in May that the colt would make it to the winner’s circle again, when he scored at 8-1 odds.

The day of the Preakness Stakes dawned as an eventful one. A Baltimore Gas and Electric transformer outside of the track failed, shutting down television, air conditioning, and even pari-mutuel windows, which made it impossible for several-thousand fans to bet on Maryland’s biggest race.  As a result of the ill-timed disaster, the Preakness Stakes had to be hand-timed by clockers, as the electric timer was out of order for the day. The power outage couldn’t have come at a worse time for the sport, but the show had to go on.

Kent Desormeaux hustled Real Quiet out of his post the instant the gates flew open in the Preakness Stakes, determined to get his late-running steed into a good position. With the speedy Baquero, setting the pace, Real Quiet raced toward the back of the pack, eighth of 10 after a quarter-mile and still sixth after a half, right by his arch-rival, Victory Gallop. Two weeks before, Victory Gallop closed like a freight train to finish second to Real Quiet in the Derby. It was a narrow defeat in Louisville, and now in the Preakness, it was becoming clear that the tenacious duo wasn’t done with each other yet.

With half of the race completed, Desormeaux knew it was time to send his colt to the top. The front runners were weakening, and the closers had yet to make a move, so Real Quiet seized the moment as his own. With a swift kick of his legs, the nimble colt accelerated with a powerful burst of speed. Right to his inside, Victory Gallop began his rally, matching Real Quiet for every stride.

The pair eerily mirrored one another as they swept around the turn, but as the stretch came into view, Desormeaux felt a power coming from his mount that could not be tamed. “At the turn, I felt the horse was telling me, ‘I’ve got these guys anytime. You tell me when to go.’” Desormeaux told The Washington Post. “Real Quiet gave me another gear.”

With a breathtaking burst of speed, Real Quiet launched to the front and took command. He stormed over the finish line by 2 ¼ lengths, leaving Victory Gallop in second, once again.

Real Quiet’s crushing victory set the stage for the a possible Triple Crown – something that hadn’t occurred in 20 years, since Affirmed’s 1978 triple. And while some people had been quick to dismiss the slender colt before, Real Quiet’s domination of the Preakness Stakes turned many skeptics into believers.

Even the colt’s own trainer was quick to admit after the race, “I never took this horse seriously. Now we’re taking him seriously.”

Three weeks later, Real Quiet set off in the Belmont Stakes in pursuit of a prize that had only been captured 11 times before. History might have been against him, but as he began pulling away in the stretch, it looked like the nearly impossible feat might just be done. But then, out of nowhere came the familiar image of Victory Gallop. Real Quiet owned a four-length lead leaving the furlong grounds, but Victory Gallop was in full flight. It looked like the Derby and Preakness winner was home safe, but in the final strides of the race, Victory Gallop equaled his rival, thrusting his head down right as they crossed the wire.

The race ended with an intense photo-finish that left the crowd of over 80,000 people at Belmont Park in shock. While the stewards reviewed the photo, frenzied anticipation buzzed through the air, leaving thousands wondering if the Triple Crown, and the lofty $5 million bonus offered to the winner by VISA, had finally been captured.

“A picture is worth a thousand words,” said track announcer Tom Durkin. “This photo is worth five million dollars. Oh, no! History in the waiting, on hold, until we get that photo finish.”

After several agonizing minutes, the results of the Belmont Stakes become official, declaring Victory Gallop the winner by the mere flare of a nostril.

Real Quiet was honored at the end of 1998 as the Eclipse Award winning, Champion Three-Year-Old Male. He went on to achieve victory in the Pimlico Special and Hollywood Gold Cup the following year before retiring, and closed out his career with a total of six wins in 20 starts, with over $3.2 million in purse earnings.

Real Quiet was a hard-knocking and dependable performer on the track, but he will always be remembered the most for his courageous run through the ’98 Triple Crown that nearly was.