Preakness Past: A Risen Star is born

Our 2018 Ghosts of Preakness Past will feature stories of eight editions of the Preakness from the last 40 years. Today, 1983 and Deputed Testamony, the most recent Maryland-bred Preakness winner.

The chatter in the weeks before the 1988 Preakness Stakes focused not on a colt, but on a filly. Winning Colors, who wired the field in the Kentucky Derby two weeks before, was attempting to make history as the first filly to take both the Roses and the Black-eyed Susans. But as history would have it, it would not be the filly who crossed the wire in front.

Winning Colors had her moment of glory in Louisville, but this time around, there was a different star ready to rise.

A strong, bay colt by the name of Risen Star — named, said his part owner and trainer, for “the star of Bethlehem and the risen Christ” — entered the 113th running of the Preakness Stakes off a third-place finish in Louisville, a length-and-a-quarter behind the winner.

Owned by Ron Lamarque and Louie Roussel, and also conditioned by Roussel, who was also majority owner of the Fair Grounds racetrack, Risen Star came into the race as the fourth choice in the wagering pool. The colt may have been slightly overlooked by the betting public, but off a good effort in Louisville — and as a son of Triple Crown hero Secretariat — Risen Star wasn’t in without a chance.

Of course, the betting public had good reason to be skeptical. For one thing, Roussel was at best philosophical about his own training abilities.

“He’d be a lot better if he had someone else training him,” he told The New York Times at the time. “So you know he’s a real top horse.”

For another, Roussel had repeatedly indicated his reluctance to enter the Preakness, had canceled two works between Derby day and the third Saturday, and had even gone so far as to fill out a scratch card before finally allowing his charge to face the starter.

In the Preakness, Winning Colors and Kentucky Derby runner-up, Forty Niner, shot out of the starting gates and instantly charged to the lead. Risen Star, with Eddie Delahoussaye in the irons, quickly grabbed a perfect stalking position off the dueling leaders. He let Winning Colors and Forty Niner do all the dirty work up front, and watched from third while the two leaders took turns throwing punches at each other.

Over a track rated good after persistent rains the night before, the top pair sped through the first three-quarters of a mile in 1:11 ⅕, just a head apart at that point. Risen Star, meanwhile, bided his time another length back while removed from the rail.

A gap opened up on the rail, and in an instant, Risen Star made his move. He charged through the opening, placing himself on even terms with Winning Colors and Forty Niner. The trio barreled around the bend, with Risen Star striking the front as they passed the five-sixteenths pole. Unraveling his hulking stride, Risen Star began to distance himself from the other horses. It was a breathtaking move that left even his rider impressed. “When I called on him, he just accelerated,” Delahoussaye said of the move that led him to a 1-1/4 length victory.

Those who backed Risen Star in their betting received a payout of $15.60 for their $2 win wagers, as well as validation for their belief in the horse. Three weeks later, Risen Star returned in the Belmont Stakes and proved that his score in the Preakness was no fluke, romping to a staggering 14 ¾-length victory in the final jewel of the Triple Crown, completing the race in 2:26 2/5, which was then the second-fastest time in the history of the race. Risen Star was the real deal, and after taking the two final legs of the Triple Crown, there was no denying it. 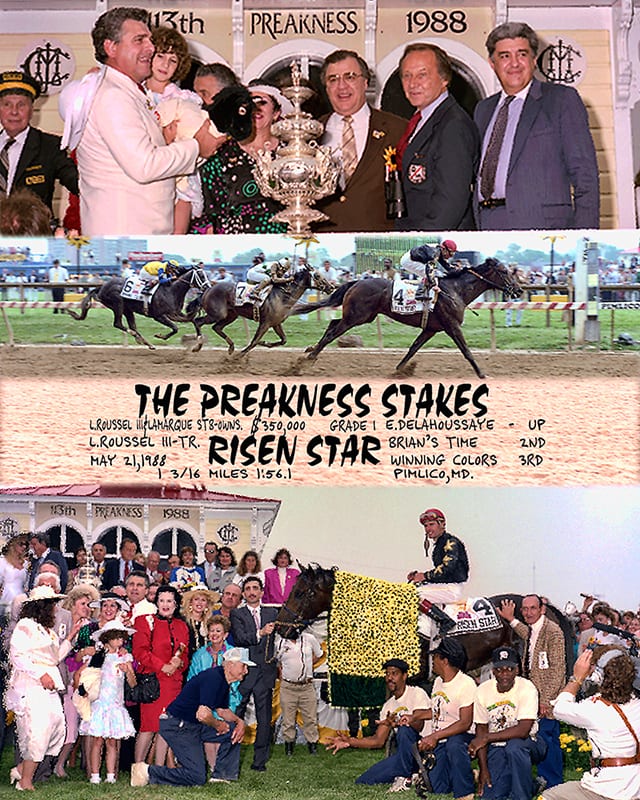 Risen Star did not race again following his triumph in the Belmont Stakes, after suffering an injury, but he had done enough to be named Eclipse champion three-year-old, following in the footsteps of his sire, Secretariat, and grandsire, Bold Ruler, to earn that honor.

He was retired to stud following his sophomore season, and among his top runners were Grade 1 winner Star Standard and Risen Raven. He’s perhaps best known today as the namesake of the Grade 2 Risen Star Stakes, one of the prep races for the Louisiana Derby at the Fair Grounds.

“I wish I could share what God and Risen Star have given me,” Roussel said in an interview with The Blood-Horse. “This has been a once in a lifetime experience.”