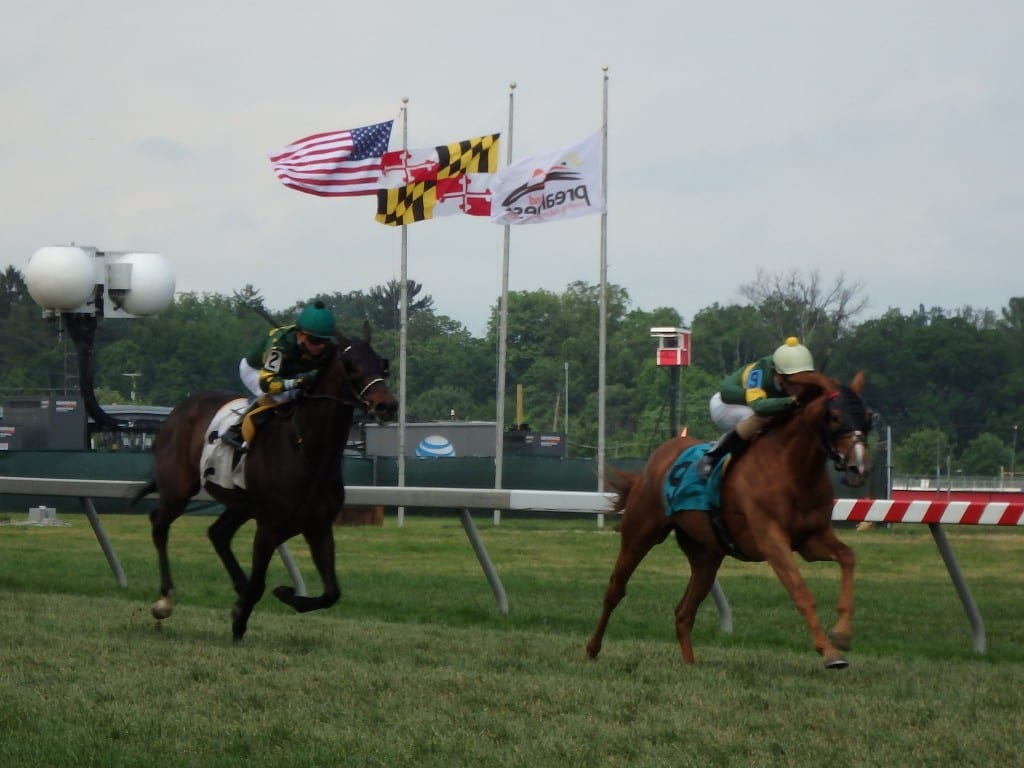 Just Howard broke his maiden at Pimlico in 2017. Photo by The Racing Biz.

A total of 237 horses — including Eclipse winner World Approval — were nominated to the seven stakes, three graded, worth $1.05 million that support the 143rd running of the Preakness Stakes (G1), the Middle Jewel of the Triple Crown, Saturday, May 19 at legendary Pimlico Race Course.

Skeedattle Associates’ Just Howard has yet to make his 2018 debut after being named Maryland-bred champion 3-year-old, turf horse and Horse of the Year following wins in the Commonwealth Derby (G3), Find and Caveat stakes. Grade 1 winner Ring Weekend, who has nearly $1.6 million in earnings from 31 career starts, has been off the board in two stakes tries this year after opening his 7-year-old campaign with an allowance win at Gulfstream Park Feb. 11.

The $150,000 Maryland Sprint (G3) for 3-year-olds and up at six furlongs, and $100,000 The Very One for fillies and mares 3 and up going five furlongs on turf are part of the renewed Mid-Atlantic Thoroughbred Championship (MATCH) Series, an assortment of 25 races at tracks in Maryland, Delaware, New Jersey and Pennsylvania which originally debuted in 1997 and ran for five years.

Aside from the Preakness, 3-year-old will be in the spotlight in both the $200,000 Chick Lang at six furlongs and $100,000 LARC Sir Barton to Benefit Thoroughbred Aftercare Alliance at 1 1/16 miles. Among the Chick Lang’s 34 nominees are graded-stakes winners Engage, Madison’s Luna and Run Away; undefeated stakes winner Midnight Poker and multiple Maryland stakes winner Still Having Fun.

On turf, sophomores will be featured in the $100,000 James W. Murphy at one mile which attracted 27 nominations, among them stakes winners Battle At Sea, Black Stetson, Evaluator, Magicalmeister, Reride, Sand Dancer, Still Having Fun, Therapist and Whirlin Curlin.