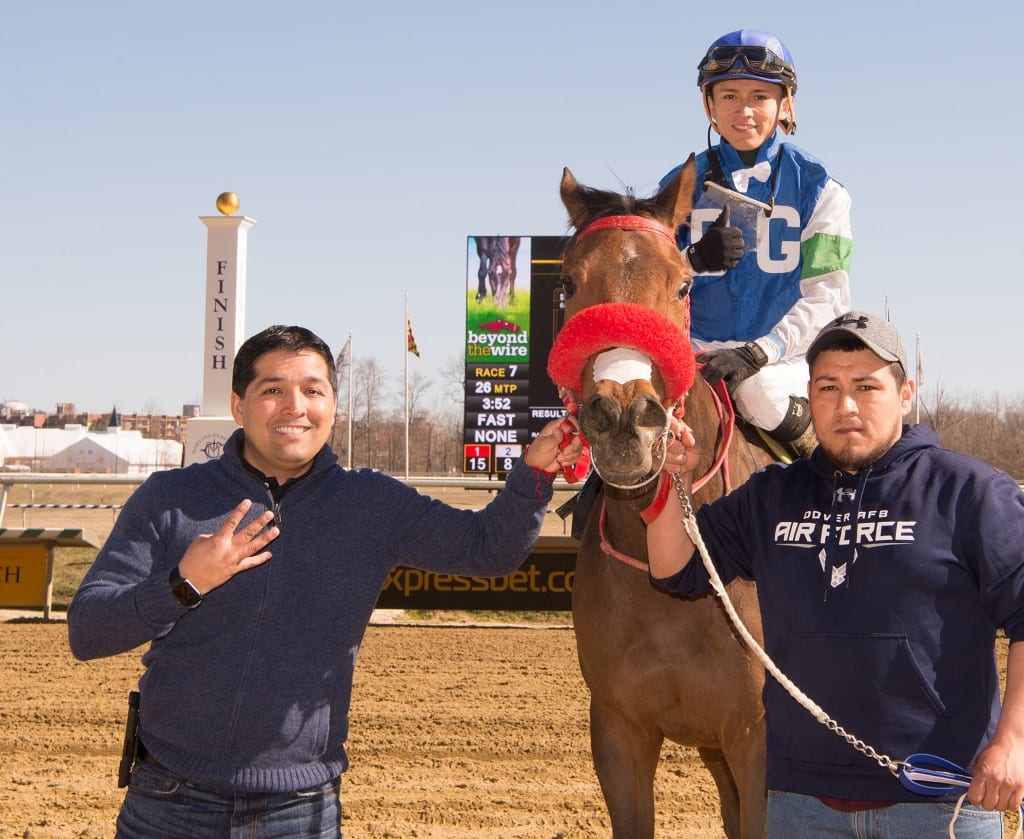 Thanks to a three-win afternoon Saturday, Vargas took a 49-46 advantage over 19-year-old apprentice Wes Hamilton into Sunday’s card, where he had four mounts. He won with Prime Time Man ($4.40) in the second race, Mila Jane ($2.60) in the sixth and Snow Fighter ($5.40) in the seventh to finish with 52 wins and more than $1.7 million in purse earnings from 267 mounts.

Hamilton, also competing against his father and two-time Maryland riding champion Steve ‘Cowboy’ Hamilton, was blanked in six mounts Sunday and wound up second in wins and purse money with nearly $1.2 million. Hamilton, who only began riding professionally Dec. 11, had a meet-high 315 mounts.

“First of all thank God for letting me be here every day and keeping me healthy to ride. I’m very happy. It was a great meet, a lot of great wins,” Vargas said. “I’m very grateful to all the trainers, very blessed to ride for them. I was fortunate to get on a lot of very good horses.”

A 23-year-old native of Puerto Rico, where he attended the famed Escuela Vocacional Hipica with classmates such as Victor Carrasco, Jevian Toledo and Manny Franco, Vargas established himself as one of the leading riders at Parx upon arriving in the U.S. in 2013.

A son and grandson of trainers, Vargas moved his tack to Laurel in 2018 and enjoyed 13 multi-win days during the winter-spring meet, riding four winners March 5 and picking up his biggest victory aboard Ms Locust Point in the Barbara Fritchie (G2) Feb. 17.

Vargas also captured the What a Summer Stakes Jan. 20 with Ms Locust Point and the Maryland Racing Media Stakes Feb. 17 aboard Miss Inclusive.

Gonzalez, 41, earned his sixth individual meet title and third in a row following Laurel’s 2017 summer and fall stands. He did not have a horse entered on Sunday, ending with a meet-high 40 wins, 155 starters and $1,082,637 in purse earnings. Kieron Magee, Maryland’s leading trainer from 2014-16, sent out both Prime Time Man and Mila Jane Sunday and finished second with 24 wins.

Two of Gonzalez’s biggest victories came in Native Dancer Stakes Jan. 27 and John B. Campbell Feb. 17 with Afleet Willy, whom he is pointing to the $300,000 Pimlico Special (G3) on the undercard of the $250,000 Black-Eyed Susan (G2) Friday, May 18 at legendary Pimlico Race Course.

“That is the key, putting the horses in the right spots. I have to thank all the owners for giving me the opportunity,” Gonzalez said. “I have a great team in the barn and they’re working hard every day. Everything works together. This is home now, and we are very happy.”

Both Vargas and Gonzalez will carry their momentum into the Preakness Meet at Pimlico, which opens Thursday, May 10. The 12-day stand, which runs through Memorial Day, Monday, May 28, includes 15 stakes, eight graded, worth $3.7 million in purses highlighted by the 143rd running of the Preakness Stakes (G1), the Middle Jewel of the Triple Crown, Saturday, May 19.

The Rainbow 6 jackpot is paid out only when there is a single unique ticket sold with all six winners. On days when there is no unique ticket, 60 percent of that day’s pool goes back to those bettors holding tickets with the most winners while 30 percent is carried over to the jackpot pool. However, on days when a mandatory payout is scheduled the entire pool is shared by those holding tickets with the most winners.