Trainer Motion to send out two in Cliff Hanger 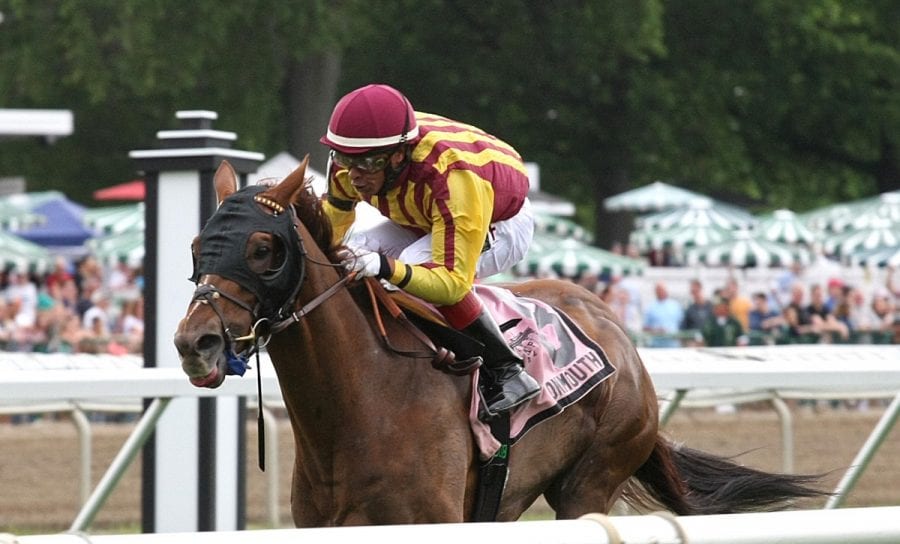 Monmouth Park opens this Saturday, May 5, with a nine-race program attracting a total of 93 entries as the lead-in to the simulcast of the 144th Kentucky Derby.

Headlining the first of 52 live racing cards is the $75,000 Cliff Hanger Stakes for 3 year olds and up at a mile on the turf.

The Monmouth Park meeting, which runs through Sunday, Sept. 9, is once again highlighted by the track’s showcase event, the $1 million betfair.com Haskell Invitational on Sunday, July 29.

Trainer Graham Motion has entered both Irish Strait and Serjeant At Arms in the Cliff Hanger. Irish Strait, a Jersey-bred making his 2018 debut, is owned and bred by Isabelle de Tomaso, the daughter of Monmouth Park founder Amory L. Haskell. Serjeant at Arms was bred in India, where he dominated by winning 12 of his 14 starts there.

“Irish Strait is probably a work away from where I’d ideally like him to be for his first start back, but I think he’s fit enough. And at that distance at that track, he’s got enough miles in him to handle this,” said Motion, who won the 2016 edition of the Cliff Hanger with Can’thelpbelieving. “I thought he worked really well last weekend, which is what encouraged me to enter him. We gave him a break over the winter just to freshen him up. He had a pretty good campaign (in 2017) and we want to run him in these races at Monmouth Park.”

A son of English Channel, Irish Strait has five wins and $285,838 in earnings from 19 career starts.

Serjeant At Arms has made two starts in the United States since arriving from India, finishing second in an optional claimer at Tampa Bay Downs on Feb. 23 before a disappointing sixth-place showing in an allowance race at Keeneland on April 8 – though the latter was on a yielding turf course.

“He won everything he could in India. They wanted to see how he stood up over here, kind of challenging him,” Motion said. “I thought his first race back at Tampa was very good. I was a little disappointed in his race at Keeneland, but the ground was on the soft side so I’ve got to wonder if he cared for. I like getting to Monmouth on a firm course at a mile. I think it’s a good distance for him.”

Serjeant At Arms shows 12 wins and three seconds from his 16 career starts. He is six-for-six at a mile on the grass.

The Cliff Hanger, which goes as the ninth and final race, attracted a field of 10 grass runners.

For Opening Day, gates will open at 10 a.m. to accommodate a Kentucky Derby card that starts at 10:30, with Monmouth Park’s first live race going at 1:45 p.m. The Kentucky Derby has a scheduled post time of 6:46 p.m.