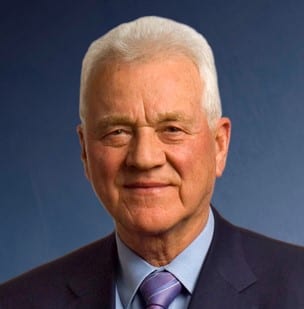 The Grayson-Jockey Club Research Foundation announced today that Frank Stronach, the founder and honorary chairman of The Stronach Group and a leading Thoroughbred owner and breeder, will be presented with the Dinny Phipps Award at the Belmont Stakes Charity Celebration on Thursday, June 7, at the Bryant Park Grill in New York City.

Earle Mack, an active participant in Thoroughbred racing and breeding for more than five decades, created the award in 2017 to honor an individual or individuals who have demonstrated dedication to equine health. The Phipps family received the inaugural Dinny Phipps Award at last year’s charity celebration. All proceeds from the event benefit the ongoing research of the Grayson-Jockey Club Research Foundation to improve equine health for all breeds.

“Frank Stronach has been committed to improving all aspects of the horse racing industry since entering the sport more than 50 years ago,” said Mack. “I am thrilled to bestow the Dinny Phipps Award to an individual who prioritizes the wellbeing of the equine in all areas from breeding to racing to racetrack management.”

“From his support of Grayson’s work to his efforts to ensure the highest standards of health and soundness for his horses and all horses that compete at his racetracks, Frank Stronach epitomizes the essence of the Dinny Phipps Award, and he is extremely deserving of this accolade,” said Dell Hancock, chairman of Grayson.

The evening will feature a cocktail reception and delicious food on the rooftop of the restaurant, which overlooks the famed Bryant Park. Tickets for the event are available at $250 each, and there are also various sponsorship opportunities available.

Stronach has won 12 Eclipse Awards as an owner and breeder. He has won the Sovereign Award for Outstanding Owner in Canada a co-record nine times and has won 18 Sovereign Awards overall.

In pursuit of his goal to care for horses at all stages of their lives, Stronach created the Adena Springs Retirement program and has organized aftercare and retirement programs at his racetracks. He has also pledged support to the Horseracing Integrity Act of 2017, which would create a uniform, nationwide, conflict-free drug testing enforcement program for horse racing.

“It is with great gratitude that I wish to thank the Grayson-Jockey Club Research Foundation for being chosen as the second recipient of the Dinny Phipps Award,” said Stronach. “This award not only honors the legacy of a great man in the Thoroughbred industry but represents upholding the integrity of our sport and improving equine health – values and principles that are most important to me.”

Phipps, a prominent Thoroughbred owner and breeder, served as the chairman of The Jockey Club from February 1983 until he retired in August 2015. He received numerous honors and awards through the years for his dedication and commitment to the Thoroughbred industry. He died on April 6, 2016.