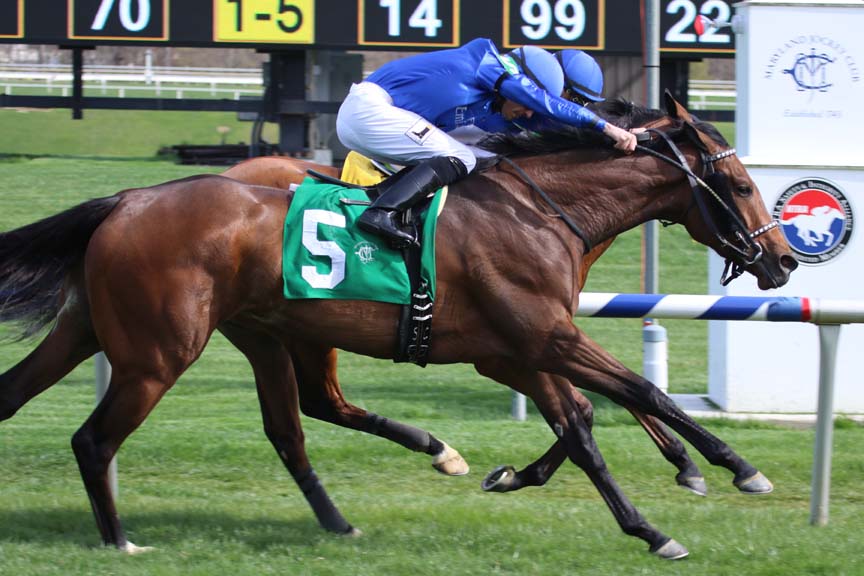 Hallie Belle was up late to upset Hawksmoor to win the Dahlia Stakes at Laurel Park. Photo by Laurie Asseo.

Upsets were the order of the day in a pair of turf stakes at Laurel Park, the $100,000 Henry S. Clark for three-year-olds and up and the $100,000 Dahlia for fillies and mares three and up, both contested at one mile.

The 18th running of the Clark for 3-year-olds and up and the 16th running of the $100,000 Dahlia for fillies and mares 3 and older, both at one mile over Laurel’s world-class turf course, were among five stakes worth $550,000 in purses on an 11-race Spring Stakes Spectacular program.

Caribou Club, a 4-year-old gelded son of City Zip, returned $15.20 while covering the firm mile course in 1:34.40. It was his fourth win in 11 starts. The gelding had previously finished seventh in the Woodchopper Stakes at Fair Grounds.

Last year’s Jerome (G3) and Withers (G3) winner El Areeb, making his first start on the turf, broke on top leaving the gate and galloped past fractions of :24.10 and :46.81 while being chased around the first turn and backstretch by Even Thunder.

Lopez, who rated Caribou Club sixth along the inside around the first turn and backstretch, moved three-wide entering the stretch and then drove the gelding inside multiple turf stakes winner Phlash Phelps at the head of the stretch before holding off Doctor Mounty by three-quarters of a length.

“My place was perfect, my horse gave it the perfect race,” said Lopez, who won two stakes on the day. “It was a very good day.”

Ring Weekend, a multiple-graded stakes winner and earner of more than $1.5 million, checked in seventh while El Areeb finished last.

Two races earlier, Godolphin homebred stakes winner Hallie Belle came with a determined run through the stretch to reel in front-running Hawskmoor and nail the multiple graded-stakes winner by a nose on the wire in the $100,000 Dahlia presented by B&B Commercial Interiors.

It was the fourth win from five starts and second career stakes victory for Hallie Belle ($31.20), who ran one mile in 1:34.70 over a firm All Along Turf Course. Hawksmoor, unraced since finishing second in back-to-back Grade 1 stakes last fall, held second by 1 ¼ lengths over Broken Bridle.

Trained by Fair Hill, Md.-based Michael Stidham, Hallie Belle won the Pago Hop Stakes at Fair Grounds to cap her 3-year-old season last December. She was well-beaten while last in the Al Stall Memorial Feb. 17 in her lone 2018 start.

“We’re not really sure what happened in her last race; it was just a throwaway. We just decided to give her a little more time and find a good spot, and here we are,” Stidham’s assistant, Anna Kinney, said. “I honestly wasn’t sure we’d get by her but I just kept yelling for her. We knew she’s a nice filly and she got there so it was great.”

Aboard for the first time, jockey Sheldon Russell settled Hallie Belle behind horses as 99-1 long shot Tanya’s Gem took the field through fractions of :24.23, :47.47 and 1:10.63 with Hawksmoor looming. Hawksmoor straightened for home in front as Russell gave Hallie Belle her cue, coming with a steady run to the finish.

“The filly gave me a perfect ride around there. I was a bit worried. I knew it was really close,” Russell said. “I didn’t know if I got her up but I knew she was running that last sixteenth of a mile. It’s a great feeling to know that she got up because I felt like she really deserved it.

“I watched her last couple races and she’s been very impressive. Amanda said to sit her in a stalking position and if she gets in the clear at the top of the stretch she’ll come running,” he added. “She exploded. I had to step on the brakes a little bit but when she got clear she really came running.”