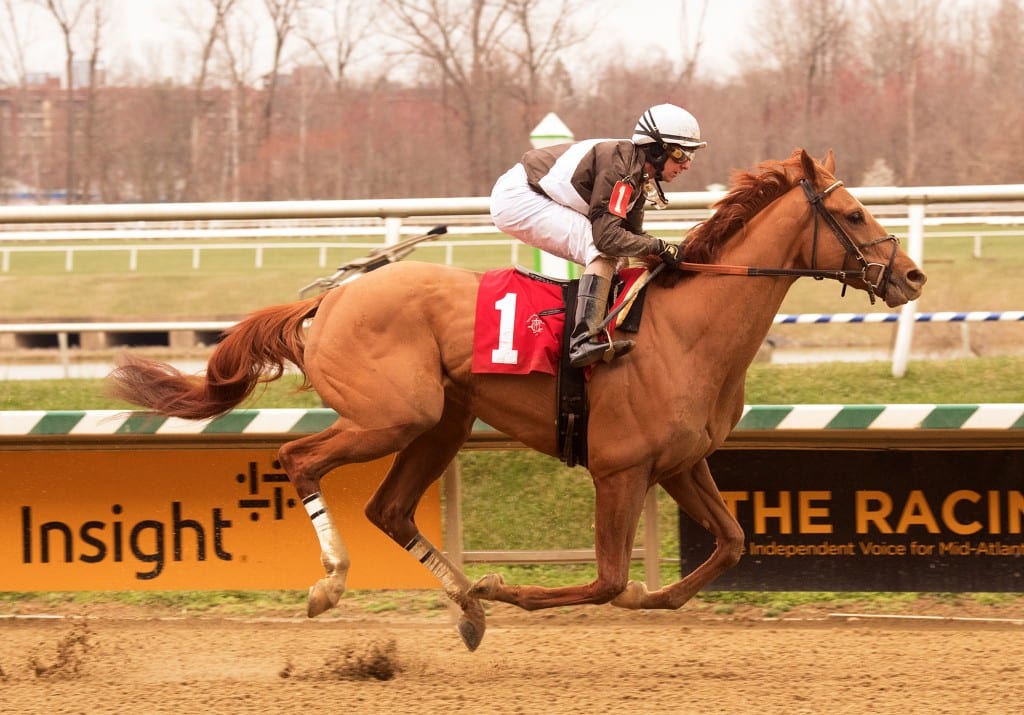 In 2017, horses trained by Laurel Park-based Rodney Jenkins made 100 starts. Prior to today, his runners had made just four starts in 2018.

But the 73-year-old’s operation looks to be revving up now. On Friday, Jenkins sent out Moonlight Shadow to a debut victory on his home track, and this afternoon, his promising sophomore Cordmaker delivered a decisive allowance victory. Both wins came for Ellen Charles’ Hillwood Stable LLC.

“I didn’t feel the best this winter,” Jenkins explained in the winner’s circle Monday afternoon. “Mrs. Charles never pressed me — she’s, as usual, always on my side. It means a lot.”

He paused, then added, “You know what? It didn’t hurt the horses, either.”

That certainly seems to be accurate. Jenkins-trained runners are three-for-five so far in 2018, and with a battalion of turf horses due to come back soon — plus what Jenkins described as “10 beautiful two-year-olds” that Hillwood has sent him — he may be poised to resume being a frequent presence in the Laurel winner’s circle.

Cordmaker, a Maryland-bred Curlin gelding who’s a half-brother to the stakes winner Corvus, was a $150,000 purchase for Hillwood at the 2016 Fasig-Tipton Fall Yearling Sale in Timonium.

As a two-year-old, he showed flashes of talent in his four starts. He broke his maiden at second asking and then narrowly missed in an allowance contest. In December’s Maryland Juvenile Futurity, though, when equipped with blinkers for the first time, he was a well-beaten fifth, after which Jenkins gave him some time off.

Returning to the work tab February 9, Cordmaker showed a steady string of solid works in preparation for his return today.

“We were high on him,” Jenkins said. “He had a couple of best works of the day. I didn’t know if going that flat mile today was the right thing, but that’s the way I planned it.”

Under jockey Steve Hamilton, Cordmaker wasn’t far off the pace, a couple of lengths back in second after a half-mile in 48.25 seconds in the one-mile test. He was forced to steady near the three-eighths pole, then came wide and drew away from his rivals, cruising home 5 1/2 lengths clear in a solid time of 1:37.63 for the one-turn mile. That was comfortably faster than the other division of the race, in which Takedown stopped the timer in 1:38.38.

Cordmaker paid $11.20 as the 9-2 third choice in the field of seven. Lonely Weekend was second, and 20-1 outsider Cash Exchange, who led early, held third. The favorite, Crea’s Bklyn Law, who had run second to now-Florida Derby champ Audible in his prior start, was sixth.

Jenkins wouldn’t commit when asked whether he might consider the April 21 Federico Tesio Stakes, 1 1/8 miles at Laurel, as a next spot. But he did allow, “I think he’ll be a good two-turn horse.”

That’s for the future, though. Today he and Charles were all smiles after their charge’s victory.

“The race came up tougher than we thought,” Jenkins said. “But he’s been training good and Stevie rode him beautiful.”