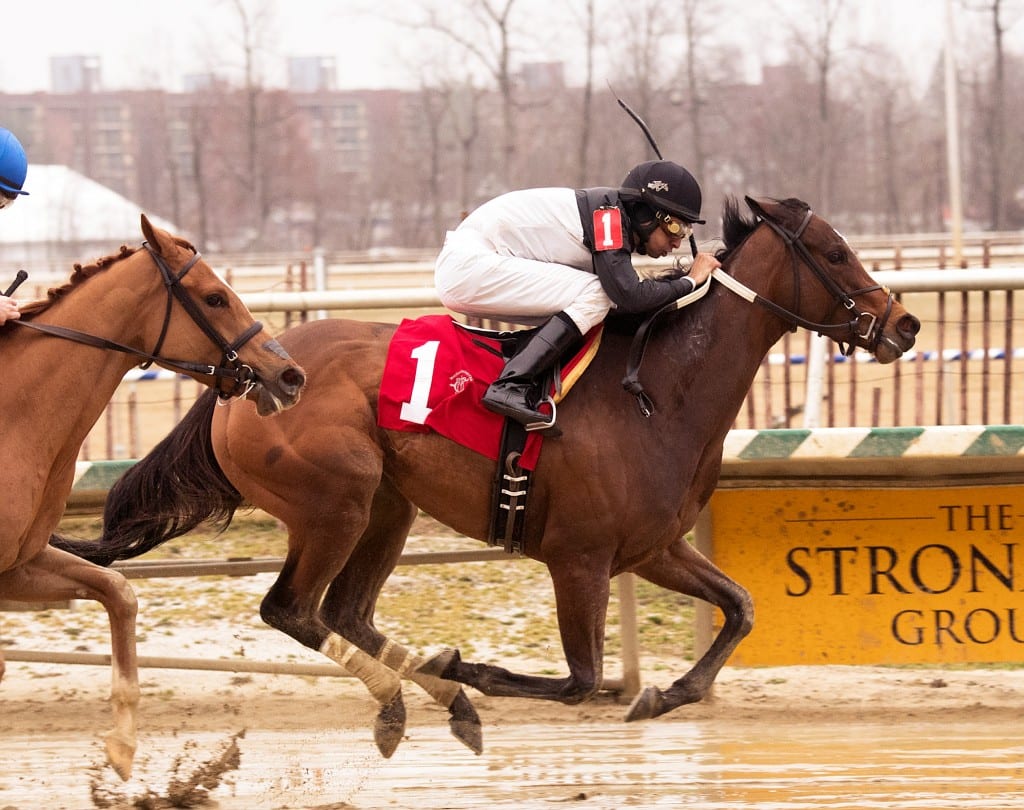 “We bought a few babies with some pedigree that we hoped could do us some good,” trainer Mike Trombetta said Saturday afternoon at Laurel Park.

That came moments after one of those babies, Finding Perfection, a $130,000 purchase at the 2016 Keeneland September Yearling Sale for Trombetta and co-owner R. Larry Johnson, had given evidence that she might be one to do them some good, delivering a hard-fought, half-length victory to win a maiden special weight test here in her second career start.

It was Finding Perfection’s second career start. In her debut, she had finished third in what now looks like a key race. That race was won by the promising Curlin filly Dictate Cool, and the runner-up, Rumor Ridge, also returned victorious.

Today, on a sloppy, sealed main track, Finding Perfection and jockey Julian Pimentel broke alertly from the inside to take a narrow advantage, leading by half-a-length over More Better after an opening quarter-mile in 23.05 seconds.

“I was a little worried about the inside post,” Trombetta said. “She came out of there alertly. That was the edge she needed.”

Finding Perfection and More Better, also making her second career start, ran one-two the entire way, with More Better, a Jason Egan trainee ridden by Sheldon Russell, making repeated bids that Finding Perfection turned aside. At the end, they were just a half-length apart while more than two clear of their rivals. Running time for the 5 1/2 furlongs was 1:05.90.

The odds-on favorite, Finding Perfection paid $3.60 to win and topped an exacta good for $13.60. More Better was the second choice in the field of six.

Finding Perfection is by Majesticperfection out of the Seeking the Gold mare Cottage Link. She is, thus, a half-sister to Inchcape, a graded stakes-placed turf runner. That suggests that Finding Perfection might also like the turf.

“She trains like it, too,” Trombetta agreed. “We wanted to see how she would like this (sloppy) surface. We’re very pleased with it.”

Originally, Trombetta figured to have not one but two exciting runners in this test. In addition to Finding Perfection, he had entered No Trespassing, slated to make her debut. That filly, by Street Cry, is a half-sister to 2010 Preakness champion Lookin At Lucky, who earned Eclipse honors as champion two-year-old and champion three-year-old in his two racing seasons.

“It wasn’t by design,” Trombetta said of the scratch. “When she got treated with Lasix, she kind of was getting, like, washy and a little colicky. The vet said we were best off to scratch; it was too much going on for her.”

Trombetta said that No Trespassing was doing fine after being treated, and as it happened, everything worked out for the best. After all, at least one of his pedigreed fillies looks like she’ll do some good.