Favorite Tale looks to double up in Fire Plug 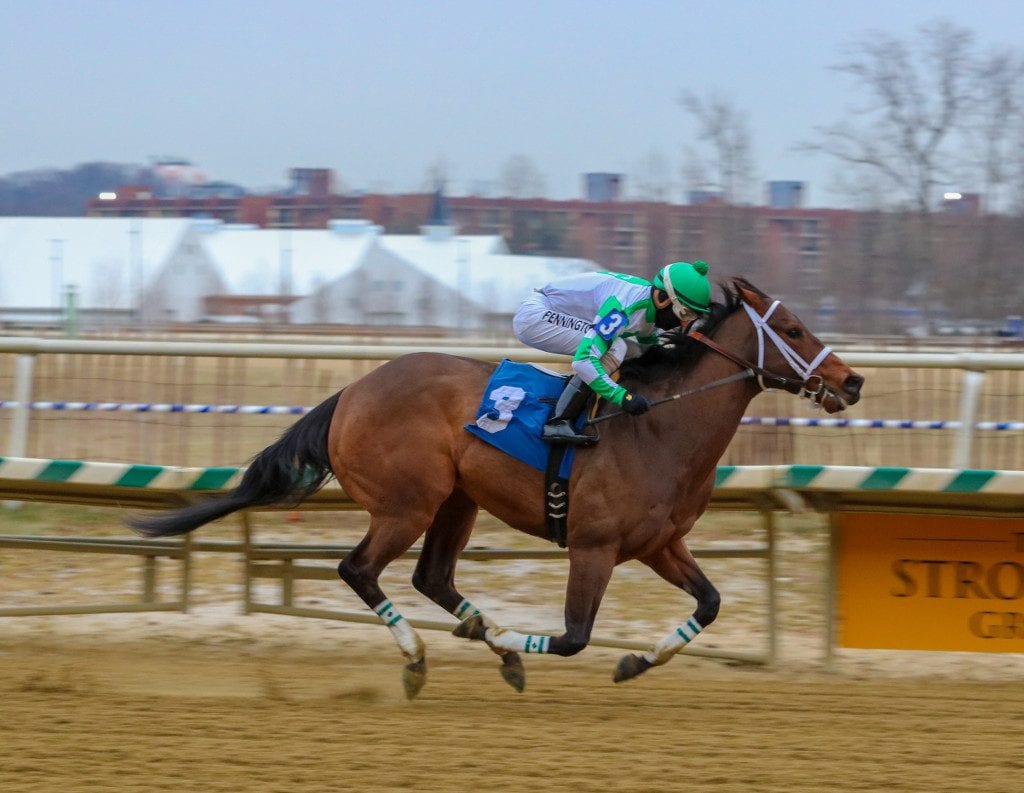 Favorite Tale got back on the winning track in the Dave’s Friend Stakes at Laurel Park January 8. Photo by Dottie Miller.

Multiple graded-stakes winning homebreds Awesome Banner and millionaire Favorite Tale will have their 10 rivals surrounded when they load in the gate for Saturday’s $100,000 Fire Plug at Laurel Park.

The 22nd running of the Fire Plug for 4-year-olds and up and the 32nd renewal of the $100,000 What a Summer for fillies and mares 4 and older, both at six furlongs, highlight a nine-race program that kicks off with a first post of 12:30 p.m.

Jacks or Better Farm’s Awesome Banner will make his 5-year-old debut in the Fire Plug, having gone unraced since running fifth in the Fabulous Strike Nov. 22 at Parx behind Chief Lion, Favorite Tale and Flashy Kyem – the top three finishers who all return in the Fire Plug.

The break appears to have served Awesome Banner well, as the son of Awesome of Course has posted a pair of bullet works at Laurel leading up to Saturday’s race, most recently going five furlongs in 59.60 seconds Jan. 9.

“He’s doing pretty good. He’s worked back a couple times since not being able to get in and his works have been pretty good over a racetrack that’s been a little dead,” trainer Ken Decker said. “We’re looking forward to him getting back to his form.”

Awesome Banner has six wins and $803,390 in purse earnings from 22 career starts, taking the 2016 Hutcheson (G3) and Swale (G2) in the winter and a pair of Florida Sire Stakes in the fall of his 3-year-old campaign.

He went winless through 10 starts in 2017 but was third by a half-length to Whitmore in the Maryland Sprint (G3), second to Imperial Hint in the Smile Sprint (G3) and El Deal in the A.G. Vanderbilt (G1) and fell a nose short of Whitmore again in the Phoenix (G2). Imperial Hint was second and Whitmore eighth in the Breeders’ Cup Sprint (G1).

“Through the summer and the fall he’s hooked some of the better sprinters in the country, and just got beat a couple times by horses that went to the Breeders’ Cup,” Decker said. “When things are good for him he puts his best foot forward and they’ve got to outrun him when he goes in there. Hopefully we can get that win for him.

“It would be good for us, but I think it would be really good for him to get his picture taken again. It would help boost his feeling about himself,” he added. “I’m hoping he’ll be sharp, and his works have kind of shown that. We’re hoping the weather stays good, and we’ll go over there and see what we can get done.”

Awesome Banner will be ridden by J.D. Acosta from outside post 12 at 118 pounds.

Breaking from the rail at co-highweight of 122 pounds will be PJG Stable’s Favorite Tale, who enters the Fire Plug just 12 days following his front-running 1 ¼-length triumph in the six-furlong Dave’s Friend at Laurel.

“I’m very proud of him. It’s been a long way back. He finally got it done,” owner-breeder Paul Conaway said. “We bred the horse, we own the mare, so we’ve had him since he was born. He’s very special to us. He’s family.”

Do Share, a 5-year-old Candy Ride gelding trained by Linda Rice, has reeled off back-to-back wins at Aqueduct since returning from his summer vacation last month. He captured a third-level optional claiming allowance Dec. 14 and wheeled back nine days later to take the six-furlong Gravesend by a half-length over Life in Shambles.

Claimed for $50,000 last January, Do Share has not finished worse than third in nine starts since joining Rice’s barn with six wins and a previous stakes victory in the one-mile Stud Muffin last April.

“He’s doing very well. I’ve been really happy with him since we gave him the summer off and freshened him up,” Rice said. “I ran him pretty aggressively since I claimed him and he looked like a horse that needed a break. I thought he would be that much more effective in the fall and winter than at Saratoga. His last race was exciting. He just got up. Those can be very exciting or heart-breakers; fortunately it was very exciting.”

Rounding out the field are stakes winners Chief Lion and It’s the Journey, the latter in the seven-furlong Challedon Sept. 9 at Laurel; Life in Shambles, second or third in six stakes for Hall of Fame trainer Steve Asmussen; stakes-placed Flashy Kyem, Rockinn On Bye, Someday Jones and Two Charley’s; Colonel Sharp, making his first start for trainer Hugh McMahon; and Something Awesome, a winner of two straight starts at Laurel since joining trainer Jose Corrales.

“He came back good. He’s a nice horse,” Corrales said. “He was jumping around after the race and he’s been training well. He likes the track here and that’s the reason why he became a nice horse. If the track is good we should be in good shape.”