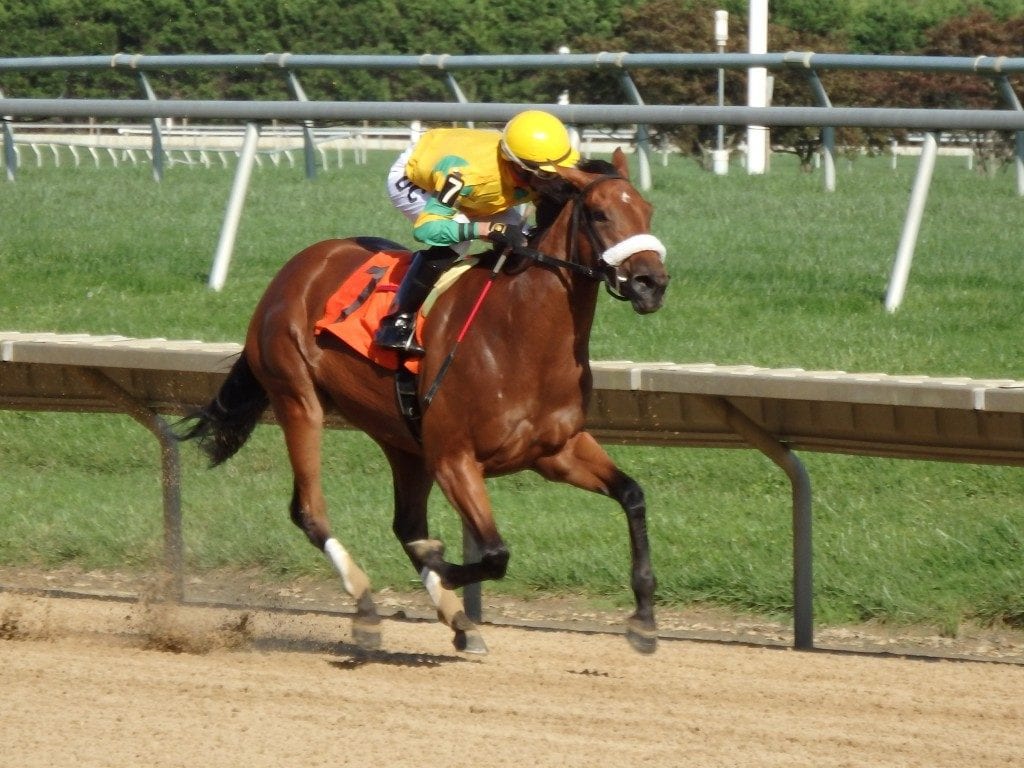 Angel At War winning at Delaware Park. Photo by The Racing Biz.

Old Coach Farm’s Angel At War, undefeated through her first six starts, will step up to stakes company for the first time as the horse to beat in the $100,000 What a Summer.

It will mark the 4-year-old debut for the bay daughter of 2011 Preakness (G1) winner Shackleford, who had raced exclusively against older horses since being unveiled last July at Delaware Park.

“As of now she’s done everything right, but this is a big step for her coming out of a two-other-than to a stake,” trainer Michael Gorham said. “But, she’s got the right attitude and she likes to win, so that’s always a good thing. At some point we’ve got to give her a shot at a big race.”

Following her 11-length debut romp, Angel At War was claimed for $40,000 by Gorham out of a five-length triumph in a second-level claimer going six furlongs Aug. 21, also at Delaware.

“We kind of took a shot. The first race she ran she was very impressive breaking her maiden for [$20,000]. I watched her run and she looked good, so we took a shot next time and she ran just as impressive right back,” Gorham said. “After we got her I said she really could be the real deal. For 40,000 it was kind of a big step for that type of horse.”

Angel At War came from a stalking spot to win her debut but has yet to be headed in five consecutive gate-to-wire victories since, coming by a combined 13 ½ lengths, including back-to-back triumphs at Laurel. Sheldon Russell, up for the most recent win Dec. 11, returns to ride from Post 2 of seven at 118 pounds.

“She’s real quick leaving the gate. The first couple jumps she’s really fast,” Gorham said. “The first time I ran her back Danny Centeno rode her and the plan was to take her back off the pace. She won the race and he came back and said the plan went bad when she broke two lengths in front of the field. She is really quick but she will rate, which is good. It’s not like she just wants to go as fast as she can as far as she’ll go. She’s doing good.”

The 122-pound topweight for the What a Summer is Cash is King and Jim Reichenbery’s multiple stakes winner Ms Locust Point. The 4-year-old daughter of Grade 1 winner Dialed In is two-for-two at Laurel, taking the 2016 Gin Talking and 2017 Willa On the Move, the latter Dec. 9. She returned from a nine-month break between races following her fifth-place finish in the Forward Gal (G2) to win a Nov. 11 allowance at Parx prior to her most recent start.

Euro Stable’s My Magician, also a multiple stakes winner, drew outside Post for Claudio Gonazlez, Maryland’s leading trainer of 2017. Fourth in the Willa On the Move, she rebounded with a neck victory in the six-furlong Politely Dec. 30 at Laurel.

The Politely was the fourth win and third in a stakes since Gonzalez claimed My Magician for $25,000 last May. She also won the six-furlong Dashing Beauty at Delaware and one-mile Geisha Nov. 11 at Laurel, and was second in the seven-furlong Maryland Million Distaff.

“She’s doing good. We like the outside post position,” Gonzalez’s assistant Troy Singh said. “We always hope to get some speed up front and let her do her thing, make one big move. She loves it at Laurel Park. She’s been a great claim. It’s a tough race. It’s not easy but we’re going to give it a shot. She’s training really good.”