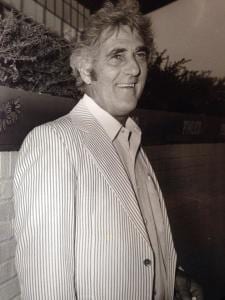 A younger Eddie Gaudet at Pimlico.

Edmond “Eddie” Gaudet, a trainer of more than 1,700 winners and patriarch of one of Maryland’s best known and respected racing families, passed away peacefully at home Wednesday, Jan. 4. He was 87.

Gaudet is survived by his wife, noted horseman, owner and trainer Linda Gaudet, and their daughters, Lacey and Gabrielle.

Lacey Gaudet, 29, works with her mother as a multiple stakes-winning trainer based at Laurel Park, while Gabby Gaudet, 26, is a former racing analyst for the Maryland Jockey Club currently covering Gulfstream Park’s Championship Meet for the TVG Network.

Services will be private. A celebration of Gaudet’s life and legacy is being planned for a later date.

Growing up in the Worcester suburb of Leominster, Mass., Gaudet rode his first horse at the age of 11 at the county fair near his home. He arrived in Maryland in the 1950s and never left, competing in and winning some of the state’s biggest races.

Gaudet sent out Maryland-bred filly At Arms Length, third in the Kentucky Oaks in her previous start, to win the Black-Eyed Susan at historic Pimlico Race Course in 1971, two years before it was first graded. One of Pimlico’s oldest stakes, first run in 1919, the now Grade 2 Black-Eyed Susan has evolved into one of racing’s premiere races for 3-year-old fillies.

Star Touch came flying with a late rally to edge Hall of Fame trainer D. Wayne Lukas’ favorite Profit Key and win the seven-furlong General George (G2) by a nose at Laurel Park in 1991, the first year it was graded.

Other graded stakes winners for Gaudet, according to Equibase, came in the 1985 Anne Arundel Handicap (G3) at Laurel Park with Classy Cut and the 1994 Garden State Stakes (G3) with Alleged Impression.

Gaudet’s best-known horse of recent vintage was Concealed Identity, a Maryland-bred son of Kentucky Derby (G1) and Preakness (G1) winner Smarty Jones that won the 2010 Maryland Juvenile Championship and 2011 Federico Tesio to earn his way to the Preakness, the trainer’s lone starter in the middle jewel.

Concealed Identity finished 10th behind upset winner Shackleford but would later find success on turf winning the 2011 Find Stakes at Laurel. With Linda Gaudet as trainer, Concealed Identity would go on to win the 2013 John B. Campbell Handicap and run second in the 2014 Maryland Million Classic.

Gabby Gaudet was a standout high school soccer player in Maryland who gave up the sport to concentrate on academics at Towson University, and was hired as the MJC analyst and handicapper during her senior year.

Though she grew up with a love of racing gleaned from her father, having also spent three summers with Lacey managing a string at Colonial Downs, it was during a summer job covering Saratoga Race Course for the Saratoga Special newspaper that she realized how much of an impact he had in the industry.

“That really changed my perspective on my father and just how great his career has been,” she said in a May 2013 interview for pressboxonline.com. “I mean, Wayne Lukas knew who my dad was. It was mind-boggling, very humbling. Here I am in Saratoga and people were saying, ‘Yeah, I know Eddie. We go way back. Great guy.’ I didn’t know my dad had that kind of reputation all over the country.”

Lacey Gaudet, also raised on the family farm in the Upper Marlboro section of Prince George’s County, authored a guest column for thisishorseracing.com in September 2017 where she wrote about caring for her father as Alzheimer’s disease progressed in his later years.

“We’re doing what’s right for him, keeping him at home when it’s hard for us, because this is where he belongs,” she wrote. “He has given us a name that rings proud from coast to coast and I never get tired of people asking, when they truly care, ‘How’s Eddie?’ I always say, ‘Thanks for asking,’ because it’s comforting to know that no one has forgotten him. But how could they?’”