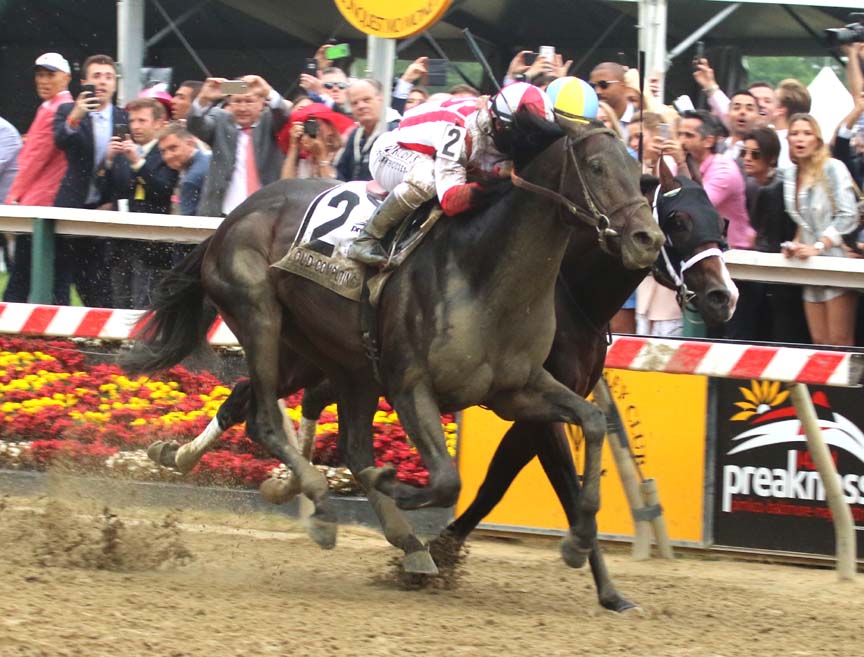 Cloud Computing wins the Preakness, one of the contenders for moment of the year. Photo by Laurie Asseo.

Thirteen of the most memorable, moving, and significant events from the last 12 months of Thoroughbred racing are up for the 2017 NTRA Moment of the Year, a distinction determined by fan voting and recognized at The Eclipse Awards. Voting is now open on the National Thoroughbred Racing Association (NTRA) website, NTRA.com, and via Twitter, where every retweet or use of the official hashtag for the moments as presented on the @NTRA account will be counted as one vote.

The NTRA Moment of the Year will be revealed during the 47th Annual Eclipse Awards, set for January 25 –the Thursday prior to the $16 million Pegasus World Cup Invitational – at Gulfstream Park in Hallandale Beach, Fla.

The eligible 2017 moments were selected to illustrate a wide range of human emotions and achievements, as well as outstanding displays of equine athleticism. Events that fans can choose from are listed chronologically as follows, along with the designated hashtag that can be used to vote:

Fans are permitted to vote for multiple moments but there is a limit of one vote per moment from each Twitter account. Subsequent votes from an account will be disqualified. Votes must be submitted by January 10 at 11:59 p.m. (ET).