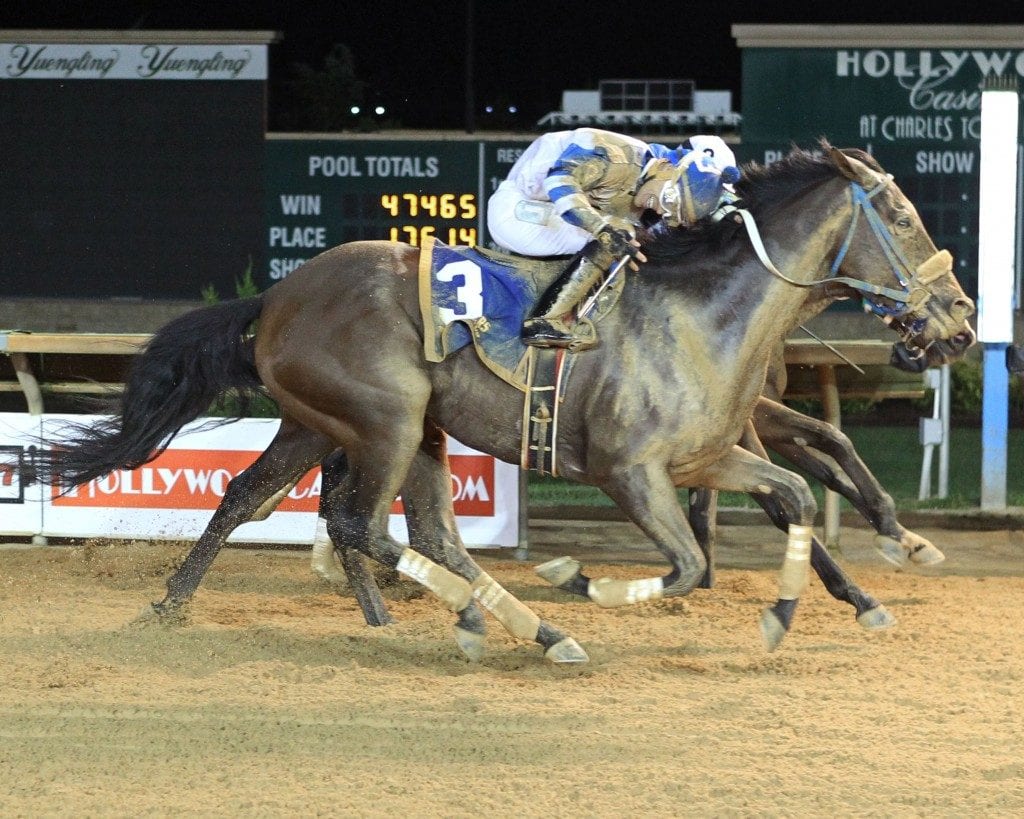 Charitable Annuity prevailed by a nose in the West Virginia Breeders Classic. Photo by Coady Photography.

While the track will be dark until January 10, Charles Town trainers and management are optimistic that the New Year will offer plenty of opportunities for them at the historic Jefferson County, West Virginia oval.

James W. Casey has for years been a fixture at Charles Town as an owner, trainer and breeder, and each year his Taylor Mountain Farms silks make their fair share of appearances in the winner’s circle at the three-quarter-mile “bullring” which turns 85 next month. Last year, horses Casey saddled won 54 races and earned $1.2 million from just 261 starts, marking the sixth straight year that his barn has eclipsed the $1 million mark in earnings and the eighth time in the last nine years. In all, Casey trainees have won 1,072 races and earned over $19.1 million.

“For me, it really is about hoping that we can win more races and little more money than the year before,” Casey said. “I really don’t have any set goals. I just really hope that we can do better than the year before. We’ve had some good years here recently. I’m really looking forward to seeing how well my two two-year-olds [Bound to Windsor and William and Mary] do this year at three. Right now, they’re the two best two-year-olds that I’ve ever had at this stage of their careers. But you never know what can happen at age three.”

Casey trainees Bound to Windsor and Charitable Annuity both recorded victories on West Virginia Breeders Classics night, with Charitable Annuity notching his second score in the last three years in the featured Classic. Much to his chagrin, however, Casey discovered that William and Mary was never made eligible to the Vincent Moscarelli Memorial Breeders Classic. He finished second to stablemate Bound to Windsor in the West Virginia Futurity and would likely have been the odds-on favorite in the Tri-State Futurity on Dec. 23 until a shortage of entries – just three– forced the race to be postponed until January.

Erich Zimny, Vice President of Racing Operations at Charles Town, would like to see the track continue to improve its handle and enhance its image throughout the Mid-Atlantic and nationally. The track will head into the New Year with the status of the Grade II, $1.25 million Charles Town Classic, initially slated for Saturday, April 21, and the Grade III, $300,000 Charles Town Oaks, still in limbo following the most recent West Virginia Racing Commission meeting, at which the Commission postponed approving the track’s stakes schedule for 2018..

Charles Town will offer live racing four nights each week (Wednesday-Saturday) from January-April, while the remainder of the calendar has not been finalized.

“The business successes we’ve enjoyed have unquestionably set the bar high,” Zimny said. “This team has done a phenomenal job here. We’re not talking about moves forward of a point or two here and there. The work they’ve done has resulted in Charles Town Racing taking a significant turn for the better. But, with that being said, there are some items of impact we identified and other things we know we can do a better job with. We embrace the challenge and will try our hardest to keep the ball rolling forward.”

Ronney Brown, another longtime local trainer, will head into the New Year only 10 wins shy of reaching the 2,500-win plateau in his career. Last year Brown trainees reached the winner’s circle 89 times from nearly 500 starters, the sixth straight year the barn topped 80 wins.

“Right now, our main goal at the barn is to get 2,500 wins,” Brown said. “That would be quite a milestone for us. We got to 2,000 in 2012 and now we’re making a steady climb to get to 2,500. I’m glad to see that the track is going four days each week for the first four months. That really helps a lot of the local guys, especially if they have 35-38 races each week. I don’t think it will be that many, but if they run that many it definitely helps. There are a lot of people up here who are struggling right now.”

While Casey reached the 1,000-win plateau in his training career in the fall of 2016 and Brown is on the verge of eclipsing the 2,500-win mark, trainer Tim Grams will head into the New Year simply hoping to come close to duplicating the barn’s success last year. Grams recorded 54 wins from just 284 starts and his runners earned just over $1 million, marking the second straight year and the third time overall [the other being 2009] that the local conditioner has exceeded the seven-figure barrier. His top trainee, Moonlit Song, dominated the local state-bred three-year-old fillies and also bested older rivals to capture the $150,000 Cavada on WVBC night.

“We’ve really had plenty of success the last 14, 15 years up here and really we just like to duplicate what we’ve done the year before,” Grams said. “I know last year was really, really good thanks to Moonlit Song and a number of other horses that me and [wife] Judy bred and raced. I think the track management has done a good job working with the horsemen in recent years. We still have good purses and plenty of live racing days and we all want to see the business get better. Of course, with the horses you never know which ones are going to be really good. But I think several of my two-year-olds turning three are going to do well and I think some of my yearlings now will do okay as two-year-olds.”

Of course, longtime local leading trainer Jeff Runco reached the 4,000-win plateau in his career on a cold, snowy day at Laurel Park earlier this month. Brown looks to be the next trainer to hit a major milestone, when he gets to 2,500 wins.

But whether they’re seeking milestones, trying to match their own success of a year prior, or hoping to keep growing the business, folks in Charles Town are approaching 2018 with optimism.