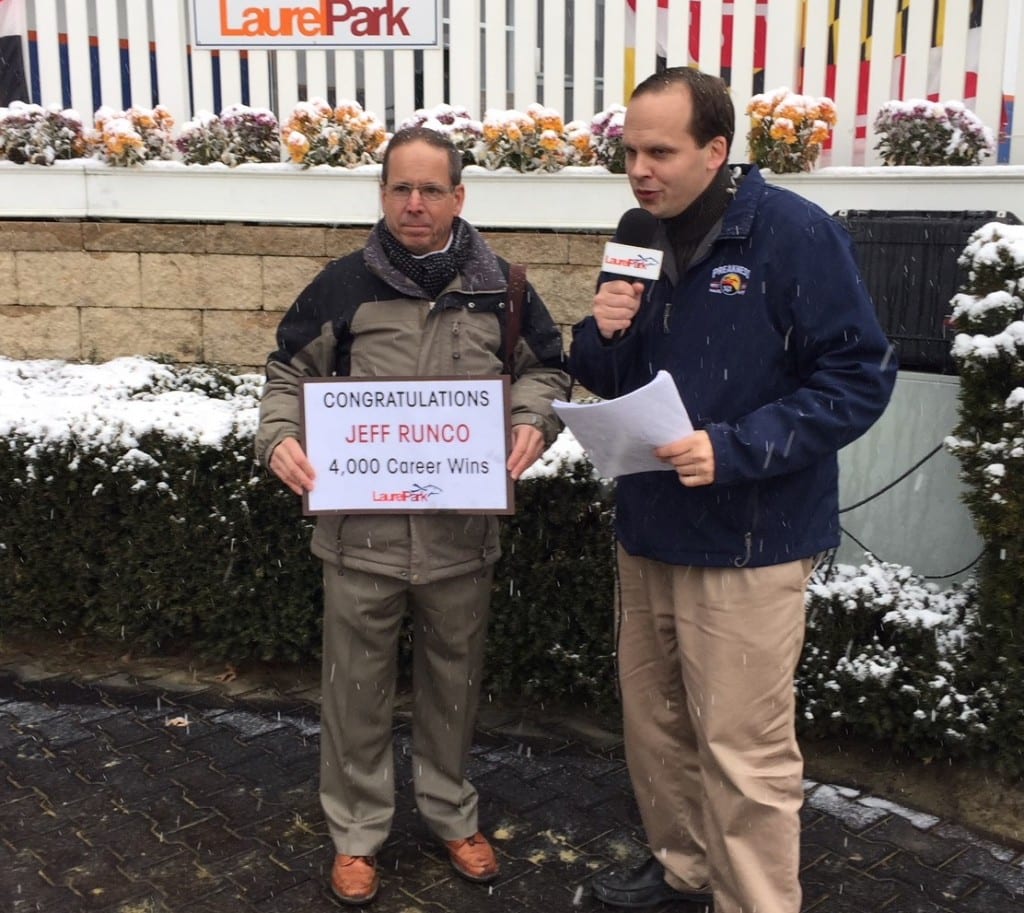 Neither rain nor snow could prevent Jeff Runco from winning his 4,000th race yesterday at Laurel Park (here with Stanton Salter). Photo by Gary Quill.

On a day when winter arrived two weeks early and at a track 100 miles east of where he has recorded 84 percent of his victories, trainer Jeff Runco saddled the 4,000th winner of his largely unheralded training career when Vua Saigon narrowly prevailed in a $16,000 claiming race at Laurel Park.

Later on – for good measure – he won again, with Captain Holiday, at his home track, Charles Town Races.

Runco, who won 160 races during a brief career as a jockey at Charles Town, has since enjoyed greater success as a trainer, and Saturday afternoon at Laurel Park he became only the 12th trainer in the long history of the sport to reach that milestone. His career has been remarkably consistent as well, saddling at least 100 winners in 26 of the past 27 years, and his current total of 159 winners this year is within reach of surpassing the 167 winners he sent out last year and his single-season career best of 172 trips to the winner’s circle in 1993.

“It’s great that we got it at Laurel Park at the big track,” said Runco, who has saddled nearly 19,000 starters in all with career earnings just beyond $48 million. “I thought it was likely going to come at Charles Town, but I knew coming over here today that both of my horses were live. I’m glad that I got it here and for Germania Farms. They’ve been one of my clients since I first started training horses over 30 years ago. I kept thinking it would happen at Charles Town, but in horse racing, you just can never know.”

Vua Saigon won Saturday’s fourth race, and several races later Runco sent out Lewisfield to a second-place finish in the $75,000 Howard Bender Memorial for Maryland-bred older sprinters. Runco has recorded 60 stakes victories in his career, the three most notable with Researcher, who provided the conditioner with his lone graded stakes tally when he won the Grade 3 Queens County at Aqueduct and then later won the first two editions of the Charles Town Classic in 2009 and 2010, before the race attained graded status.

“Everyone plays such a big part in the whole operation,” Runco said. “The grooms, the assistants, the clients and my wife, Susan, all have been the main contributors. It takes a lot of work to have the whole operation be a success. You don’t reach these type of milestones without good horses and good clients and good help. Getting 4,000 wins is a nice accomplishment. I always thought that it would come at Charles Town where I got win number 3,000 with a horse that Jim Lewis had. It would have been nice to get it with Lewisfield because that was one of the last horses he bred.”

Many of the horses that Runco has saddled to victory have been either owned or bred by his and his wife Susan’s Coleswood Farms and named in honor of his step-son, Robert, and his son, Jeremy. The Omaha, Nebraska native has already secured his 12th straight training title at Charles Town, and several of his runners who just missed on the West Virginia Breeders Classics card, including North Atlantic and T Rex Express, have since come back to win state-bred stakes races.

Thursday evening Runco reached the doorstep of the 4,000-win plateau when Inner Strength won the two-turn feature for state-bred fillies and mares, but on Friday night he was winless in three tries before heading to Laurel Park on Saturday with two serious chances of reaching the milestone. From a statistical standpoint it appeared an almost certainty that his 4,000th victory would occur at Charles Town, a track where he has saddled 3,369 winners dating back to his first full season as a conditioner in 1985.

Although Runco trainees had failed to find the winner’s circle on West Virginia Breeders Classics night, he quickly pointed out that North Atlantic and Weekend Liberty finished second and third, respectively, behind Charitable Annuity in the $350,000 Classic and T Rex Express was second to Moonlit Song in the $150,000 Cavada. Nevertheless, it was dramatically different from one year earlier when Runco trainees Slip the Cable, Bullets Fever and Spa Creek all found the winner’s circle on the track’s premier night for state-bred runners.

“We didn’t win any of them, but we had a good night,” Runco said of the WVBC card. “Most of the horses we sent out that night ran well and they came back good and some of them have since won stakes. A lot of the horses we race here and at Charles Town are homebreds. We don’t have clients that are going to spend six figures to buy a yearling and hope the horse develops into something special. But we have a lot of great clients who enjoy being a part of moments like this.”