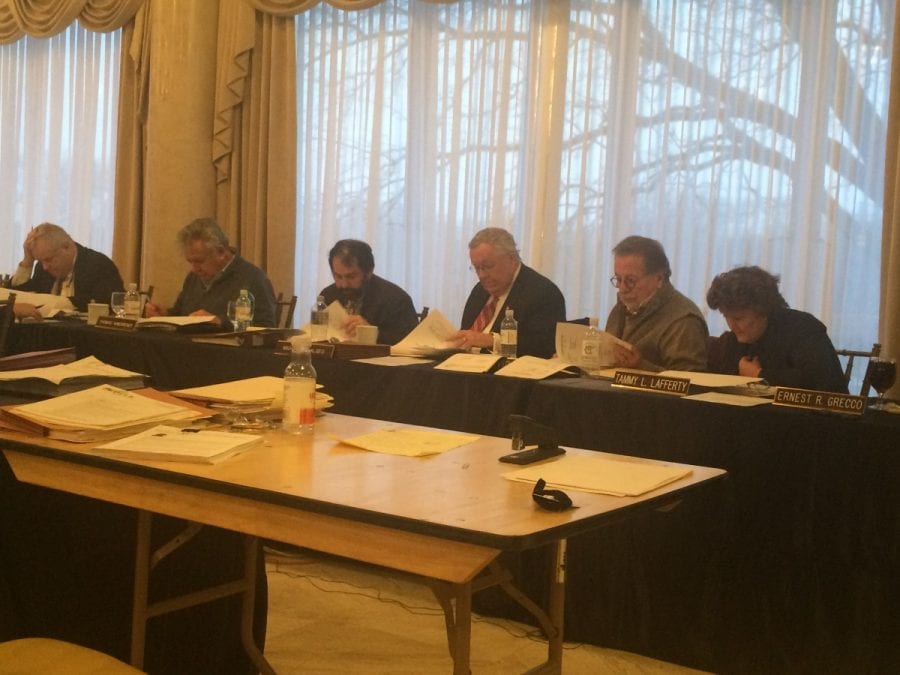 File photo of the Maryland Racing Commission at work. Photo by The Racing Biz.

Disregarding a semi-botched split sample and an out-of-state court ruling that, while not controlling could fairly be called relevant, the Maryland Racing Commission today upheld a state stewards’ decision disqualifying a horse after it came back with a methocarbamol overage.

“I think they missed an opportunity to get ahead of some of these overages,” trainer Tony Aguirre said after ending up on the short end of the Commission’s decision. “I’m not disagreeing there shouldn’t be a penalty. My horse had an overage. It wasn’t enough to change the outcome of a race, and therefore I shouldn’t lose my purse. I worked for the purse.”

Aguirre’s troubles began after Puturseatbelton, a horse he owned as well as trained, won the fourth race at Laurel Park on June 23, a $7,500 claiming event.

Three weeks later, the state’s equine testing lab, Truesdail Laboratories, notified the stewards that Puturseatbelton had carried 1.9 nanograms per milliliter of methocarbamol, a muscle relaxant marked as Robaxin, in its blood during the race. That amount was in excess of the state’s permitted 1.0 nng/mL threshold.

Aguirre requested a split sample, which — after a delay — confirmed the overage. As a result the stewards slapped Aguirre with the disqualification and attendant loss of purse, as well as a $500 fine.

A four-member panel of the Commission — including commissioners Tom Bowman, David Hayden, Tom Winebrener, and Ernest Grecco — unanimously decided today to uphold the disqualifcation, assess Aguirre one-half of one point on the multiple medication violation point system, and to rescind a $500 fine the stewards had imposed.

That left Aguirre, a trainer with a small stable of 10 or so horses who also owned Puturseatbelton, out the $10,260 winner’s share of the purse — an amount, he acknowledged, “doesn’t sound like a whole lot to a lot of people” but matters to him.

It also left him feeling “wronged” by the outcome he said.

For one thing, there was the matter of the split sample.

When a trainer requests a split sample, the package of items (including the sample itself, paperwork, and the check provided by the trainer to pay for the test) is compiled, boxed and sealed in the trainer’s presence. That’s to ensure the chain of custody — legally, the movement and location of physical evidence from the time it is obtained until the time it is presented in court — remains unbroken.

While in this case the split didn’t get lost, Aguirre asserted, “The chain of custody was breached somewhere in between when (Racing Commission inspector) Joe Poag and I went to the UPS to send it off and when (Pennsylvania Equine Toxicology & Research Laboratory) received it.”

Shortly after they sent off the split, Aguirre said he received a call from Poag telling him that the “check and paperwork were missing” from the package at the Pennsylvania lab.

“It was there when it got shipped out,” Hopkins said. “It got lost somewhere on the receiving end.”

Maybe, said Aguirre. But that’s why the chain of custody is important: to ensure fair treatment of the accused.

“The check and the paperwork were no longer with the blood,” he said. “It was sealed by our head investigator — I watched him. Then they’re supposed to tell me that that’s (Puturseatbelton’s) blood. Well, the numbers (on the sample) matched; that’s good, but it just drew questions, that’s all. I can’t say that it was (his blood), and I can’t say that it wasn’t.”

At the same time, Aguirre was frustrated that the Commission chose to ignore an August Kentucky court decision, currently on appeal, tossing  penalties assessed against trainer Graham Motion for his own methocarbamol overage. There, the court ruled in part that the 2.9 nng/mL found in the blood of his trainee Kitten’s Point — more than was found in the blood of Puturseatbelton — was too small to have an impact on the outcome of the race.

“It ultimately did not change the outcome of a race,” Aguirre argued of the amount Puturseatbelton carried in his bloodstream.

But Catherine Bellinger, the attorney representing the state stewards, said that for purposes of this hearing, that was beside the point.

“The amount was ‘slightly above’ but nonetheless above the threshold level,” she told the Commission. “I think the Commission needs to uphold the stewards’ decision.”

That argument ultimately convinced the Commission to uphold the disqualification, which was the biggest item under consideration. Whether it will seek to reconsider its threshold rule on methocarbamol remains to be seen.

On the matter of the split sample, Hopkins said that he saw no reason for change.

“I’m comfortable with our procedures,” he said. “Our procedures are rock solid. It wasn’t on our end. The trainer will admit, everything was in the box. He saw it get sealed up.”

“It was nice of the Commission to not give the fine. I’m appreciative of that, obviously,” Aguirre, the trainer, said. “But the loss of purse in a horse that is not going to change the outcome of a race is just unbelievable.”

COMMISSION NOTES In a separate hearing, the Commission upheld by 3-2 vote the disqualification of Six Tonsafun, a then-Dale Capuano trainee who won July 22 but was found to have trace amounts of cocaine in her system. The stewards had disqualified the horse but not imposed additional sanctions on Capuano after the horse’s groom admitted to possessing cocaine the day of the race… The Commission unanimously voted to modify its claiming regulations to prohibit suspended trainers from claiming horses as either trainer or owner; the current rules prevent them from claiming horses as a trainer while suspended but permit them to do so as an owner.