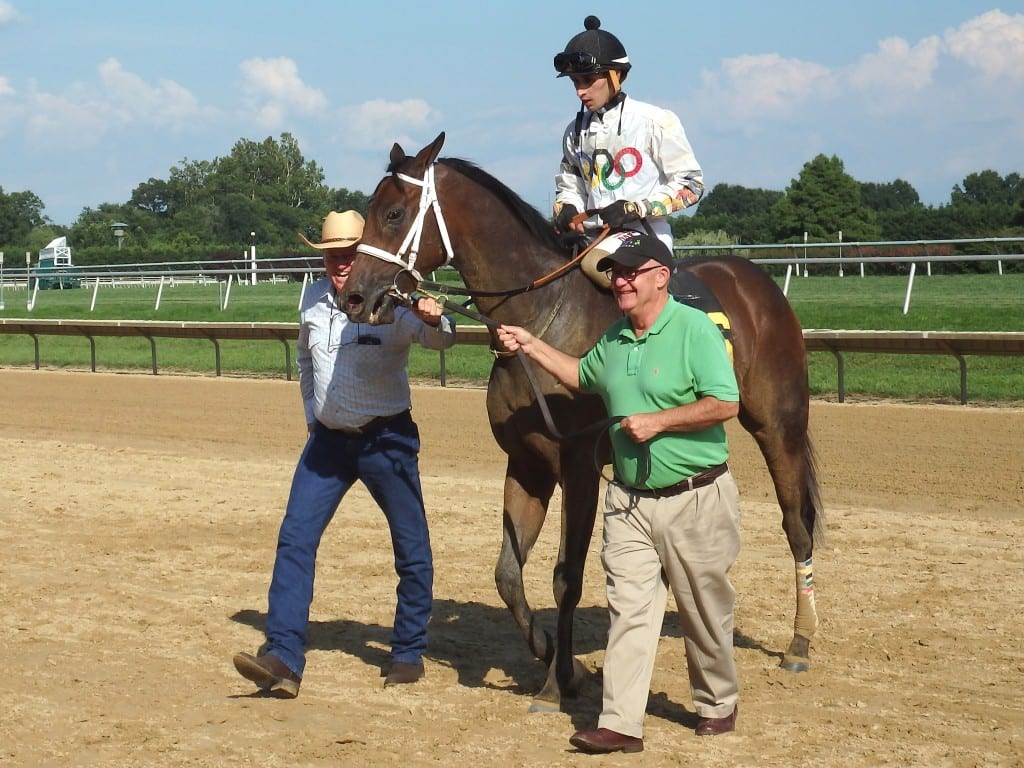 On the road for his last three starts, all in stakes, Sagamore Farm’s Barry Lee returns to the site of his impressive summer debut victory for Saturday’s $100,000 James. F. Lewis III on Ben’s Cat Day at Laurel Park.

The Lewis for 2-year-olds and the $100,000 Smart Halo for 2-year-old fillies, both at six furlongs, are among six stakes worth $575,000 in purses on an 11-race program that includes a tribute to the life and career of late Mid-Atlantic legend Ben’s Cat, who died this summer at the age of 11.

Purchased for $380,000 as a 2-year-old in training in March, Barry Lee turned heads with a front-running 6 ½-length maiden triumph going five furlongs July 14 at Laurel. The effort earned him a trip to Saratoga for the Saratoga Special (G2), where he brushed the gate and rushed up to contest the lead before fading to eighth.

From there, the Violence colt was a three-quarter-length winner of the Arlington-Washington Futurity over Arlington Park’s synthetic surface before returning to graded company in New York, where he was a decisive second behind Engage in the six-furlong Futurity (G3) Oct. 14.

“The fact that he can run out of his stall and he’s already run here is a big advantage. Two-year-olds shipping all over the place that takes a lot out of them. We’re just trying to do what’s best for him right now and find the best spots,” trainer Horacio DePaz said. “We’re looking to keep him going. I really liked how he ran last time.”

DePaz said Barry Lee will continue to run in blinkers, which he has worked in and wore for the first time in the Futurity. Horacio Karamanos, up for his stakes win, rides from Post 4 in a field of six. All horses will carry 120 pounds.

“He’s a horse that was always pretty forward and he breezed fast at the sale but when he’s without the blinkers he doesn’t put in as much effort as you would like him to put in,” DePaz said. “You have to ask to get something out of him and when you do ask him he just gives it all within a few strides. With the blinkers, he just kind of puts himself into it on his own and when you ask him to run he finishes up.

“When we put the blinkers on him first time he wasn’t rushed up here, kind of went up there on his own and finished up real well,” he added. “He lost to a really nice horse but considering that he ran as good as he did, just keeping him running three-quarters right now instead of stretching him out like everybody’s going to be trying, we’ll take advantage of that. We get to keep him here and he can run right out of his stall, so that’s always a plus.”

“With the blinkers on you don’t have to ask him to do it. He’s a horse that’s got a turn of foot and he’s got ability so he can give it to you if you ask him for it,” DePaz said. “These past two works he’s just been doing it in hand. They’re probably the best works he’s had since we’ve been working with him. I think in time he can develop into being a nice horse for us.”

Kowboy Karma is one of three stakes winners entered in the Lewis. Co-owned by trainer Larry Jones with his wife, Cindy, and Michael Pressley, the gelded bay son of Kodiak Kowboy was most recently fourth in the Oct. 7 Champagne (G1) at Belmont Park, a neck out of third and three lengths behind runner-up Good Magic, the 11-1 upset winner of the Breeders’ Cup Juvenile (G1) Nov. 4.

Alex Cintron has been aboard for all four of Kowboy Karma’s races, including a win in the Strike Your Colors Aug. 10 at Delaware Park and a second in the one-mile Sapling Sept. 2 at Monmouth Park, and has the assignment from outside Post 6.

The other stakes winner in the field is Whereshetoldmetogo, who bounced back from finishing sixth in the Sapling to take the 5 ½-furlong First State Dash Sept. 30 at Delaware. The Maryland-bred El Padrino colt will be ridden by Victor Lebron from Post 3.

Completing the field are stakes-placed Kitchen Fire and maiden winners Blame It On Honey, 12th in the Champagne, and A Different Style.

The Lewis was won last year by El Areeb, who went on to back-to-back Grade 3 victories and establish himself among the leading 3-year-olds of 2017 before an injury knocked him from the Triple Crown trail.