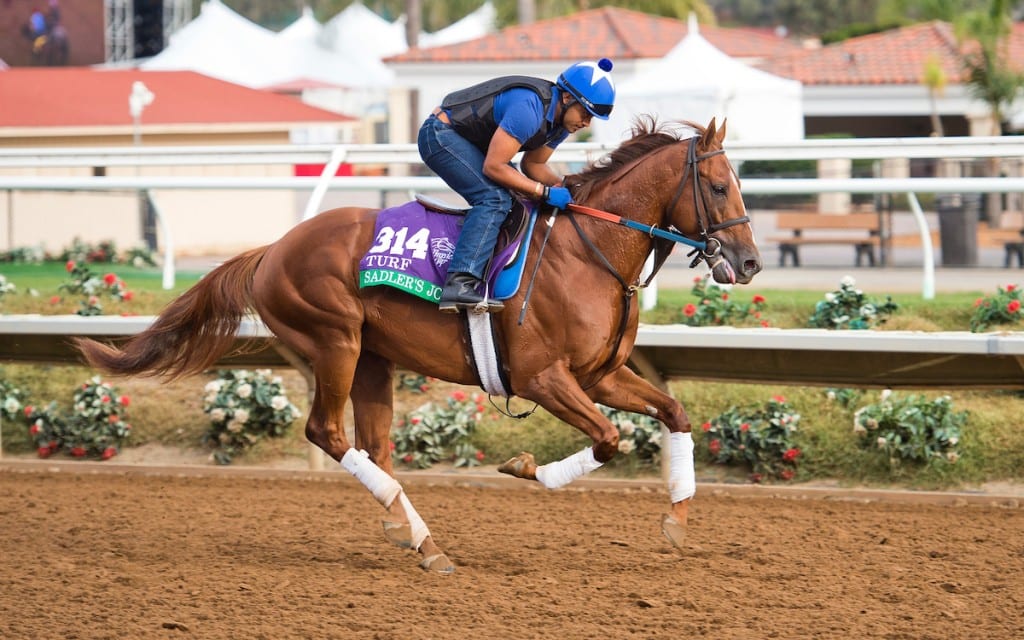 A few years ago, Lauren and Rene Woolcott watched Tonalist battle the likes of American Pharoah and California Chrome in major races, including two Breeders’ Cup Classics. The Woolcotts, who had enjoyed only a few recent successes in over two decades on the steeplechase circuit, emerged on the thoroughbred world as the breeders of the Belmont Stakes winner Tonalist.

Tonalist, in his Triple Crown debut stole the spotlight, upsetting California Chrome in the Belmont Stakes and helping to spoil that runner’s bid for Triple Crown immortality.

Advancing to his four-year-old year, Tonalist, a son of Tapit the Woolcotts sold as a yearling, would win back-to-back Jockey Club Gold Cups, as well as the 2015 Grade 1 Cigar Mile, and nearly always run well among racing’s highest-performing horses.

Sadler’s Joy was a yearling then, hanging out in the Woolcott’s paddock at their Woodslane Farm in Fauquier County near Warrenton. He was there relishing his first 18 months on earth, just as Tonalist had a few years earlier.

At Del Mar racetrack Saturday afternoon, Sadler’s Joy will be saddled in the Woodslane colors in the $4 million Longines Breeder’s Cup Turf (G1). The mile-and a-half test on the grass slates the best from across the country and around the world. No horse in the field offers a morning line of higher than 20-1, rare in a 14-horse field. Sadler’s Joy is 12-1 in the morning line and #13 in the starting gate. Irish-bred Ulysses is the favorite at 7-2.

However, Woodslane’s four-year old has a knack for this condition. While he’s won five of 13 races over in his late-developing career, he’s won three of his five attempts at 12 furlongs over the grass. Sired by Kitten’s Joy out of Dynaire, by Dynaformer, Sadler’s Joy started a three-race winning streak late into his three-year-old year with a maiden score at this distance Saratoga.

His return trip to the Spa this summer included a start in the Grade 1 Sword Dancer, again at this distance. Again, he rallied late to get the money.

For Woodslane, momentum from the success that Tonalist enjoyed has carried forward to Sadler’s Joy. Neither was quick to develop his talent.

“Slow-maturing doesn’t bother us,” offered Lauren Wolcott. “We’re not worried if we have to wait until the late in the three-year-old year or four.”

Seeing patience rewarded with relative newcomers can be eye catching in the thoroughbred game. The Woolcotts were named TOBA’s Members of the Month in May, after a win in the Pan American (G2) and prior to the Sword Dancer.

“Every major win gives our operation a leg up,” acknowledges Lauren Wolcott. “When you breed a horse like that, it gives you a little bit of respect. It separates you a little bit, not a lot. In a short period of time, having another grade 1 winner adds to that recognition.”

The Woolcotts have generally bred their horses out-of-state – for economic reasons – but prefer to raise them at home, in part because the land offers its own benefits.

“There are always leading and lagging things when there are changes in a society, and we’re still blessed with what Mother Nature gave us,” Woolcott said in 2014.

“The land hasn’t changed,” she says. “We’re still blessed with all we have underhoof.”

Early development of horses like Tonalist and Sadler’s Joy is something the Virginia industry officials have picked up on. Virginia’s certified program was recently launched, rewarding owners who lodge young horses in Virginia for at least six months.

Julien Leparoux, who delivered both of his graded stakes wins this year, returns for the mount. Quick early fractions by anyone other than Sadler’s Joy are the hope of the Woolcotts, who have been out to trainer Tom Albertrani’s barn on the Del Mar backstretch several times since Sadler’s Joy arrived last Sunday from Belmont Park. They like what they see in their calm, comfortable colt in his first trip to California.

“He doesn’t seem to know that he went anywhere,” joked Woolcott.

Perhaps characteristic of a great upbringing.