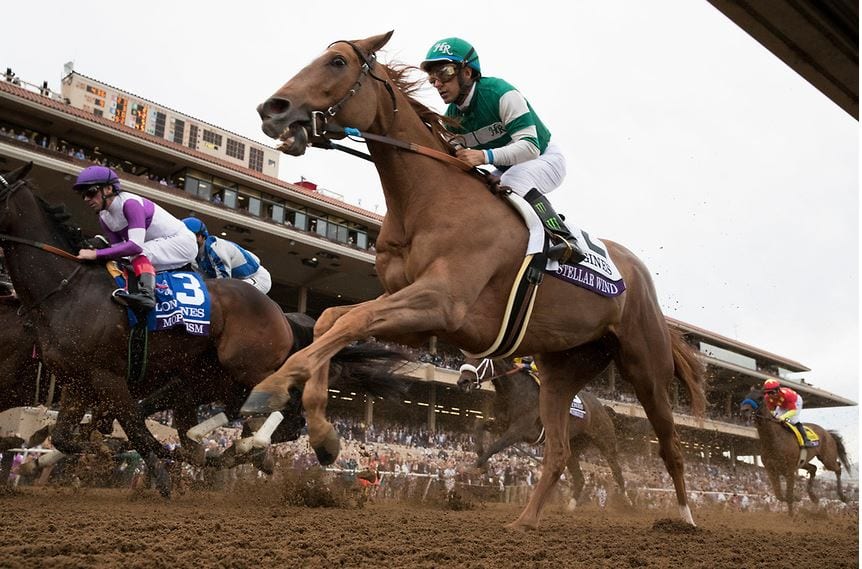 It wasn’t a great Breeders’ Cup Friday for horses bred in the mid-Atlantic.

Nor, as it happened, was it a great day for the “train up to the Breeders’ Cup” strategy suddenly in vogue this year.

In the weeks leading up to Breeders’ Cup 2017, there’d been much discussion of trainers’ decisions to skip traditional preps in order to “train up to the Breeders’ Cup.” Their decisions left a traditional prep season — those late September and early October tilts at places like Belmont Park and Keeneland — largely bereft of high-level names.

But in races contested Friday — particularly the two events for older horses, the Dirt Mile and the Distaff — big names fell to horses with more recent outings.

The Bob Baffert trainee Mor Spirit, a Pennsylvania-bred, dazzled in winning the Met Mile by six lengths while earning a 117 Beyer — and then was never heard from again. He did not race between that June 10 triumph and yesterday’s Dirt Mile, in which he was the 3-1 morning line favorite and left the gate at even lower odds.

And there was the Virginia-bred Stellar Wind, she of the six Grade 1 wins, spotless three-for-three record this season, and one Eclipse Award already on the shelf. Trained by John Sadler, she entered yesterday’s Distaff — in which she was the 5-2 morning line favorite before drifting up to 3.10-1 at post time, leaving her the second choice of eight — without a start since July 30.

Both consumed a lot of bettors’ money — and attention — yesterday. But neither ran a step.

Mor Spirit, under jockey Mike Smith, found a good spot from which to stalk the early pace of Sharp Azteca, but when the running started, he had no answers.

“I was in a really good spot,” Smith said. “He just didn’t want it today.”

Mor Spirit, empty when the running started, faded to eighth.

“I was afraid that with Mor Spirit going in that I couldn’t get enough into him,” Baffert explained. “He just got tired.”

It would have been the most horse racing of all horse racing moments if Sharp Azteca — trained by reviled “juice man” Jorge Navarro — had managed to hold on. But after running a big one, he ceded the lead late to longshot Battle of Midway, who won by a half-length and paid $30.40 in the process.

The story was similar two races later for Stellar Wind. She stalked the pace in third along the inside, came under a ride on the turn, and faded to eighth and last in the field.

Rallying from towards the rear of the field, Forever Unbridled, sent off at 3.70-1, third in the event a year ago, went clear leaving the furlong grounds and held off the even later-running Abel Tasman to win by a half-length.

While it certainly would be to racing’s overall benefit to put an end to the idea of skipping all of the late- and post-summer preps to train towards the Breeders’ Cup — and while the performances of Mor Spirit and Stellar Wind seem to speak to the benefits of racing — Forever Unbridled’s win doesn’t exactly set the traditionalist’s heart aflutter.

The Dallas Stewart trainee had made just two starts this year prior to the Distaff, winning the Grade 2 Fleur de Lis easily in June before wearing down the great Songbird in that one’s swan song to take the Grade 1 Beldame. That win came on August 26, leaving her a two-month break prior to the Distaff.

“Last year she had an injury (after the Breeders’ Cup) and we gave her plenty of time,” Stewart explained. “(Owner) Chuck (Fipke) was right about putting her back in training. He didn’t have to. He could have just retired her already a Grade 1 winner. He opted to bring her back and the injury wasn’t bad and she was never sore. We brought her back and put her back in training and she’s so good when you space those races out. She’s the best I’ve trained.”

The two juvenile races ran — more or less — to form. The Juvenile Fillies Turf went to the unbeaten Chad Brown trainee Rushing Fall, who won by three parts of a length at 3-1 odds. And the Juvenile went to the Aidan O’Brien-trained Mendelssohn, the lukewarm 4.80-1 favorite.

In the former, Happily, the 2.40-1 favorite after beating Group 1 boys at Chantilly, had no place to run throughout while inside and finished last of 14. Moon Dash, the Mike Stidham trainee who’d won at first asking at Delaware Park, led early but faded to tenth.

In the latter, the Graham Motion-trained Untamed Domain, who debuted at Laurel Park, made a big wide run into contention on the far turn and stuck with it to the end to finish second, just a length behind the winner.

“He ran awesome. But, it’s awfully tough to come in second in these races,” Motion said. “It’s better than seventh I guess. I’m happy to be second, but you only have one shot at these races.”