No rein, no problem for Lynch, Tricks to Doo 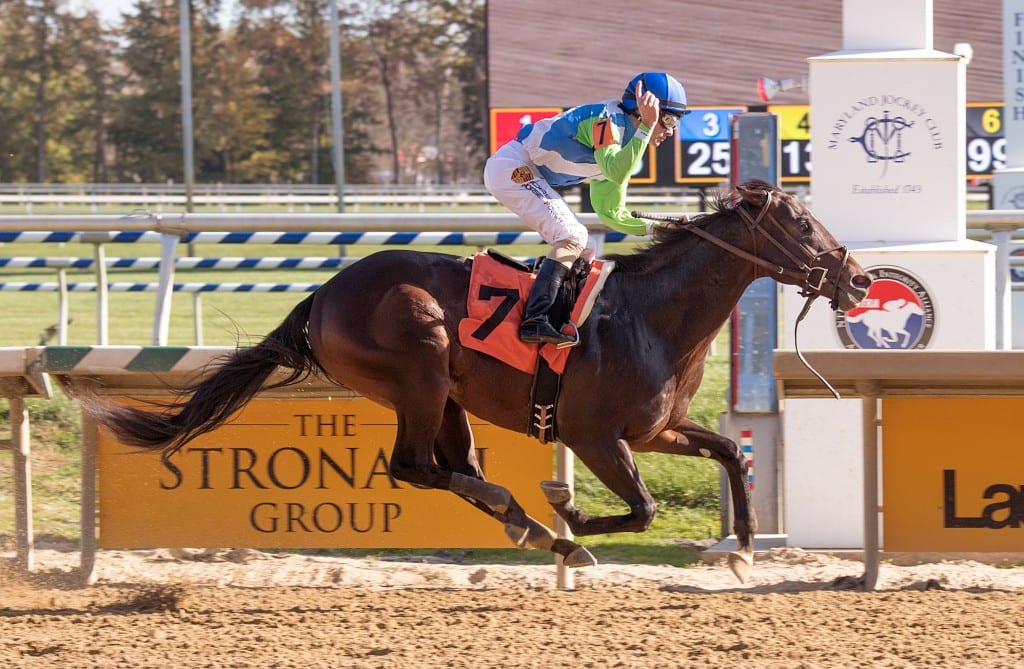 Even without steering, Tricks to Doo was much the best today. Photo by Jim McCue, Maryland Jockey Club.

Neither a broken rein nor the finish line could slow down Lael Stables’ Tricks to Doo in his second career start, losing his rider on the gallop out and needing to be caught in the paddock following a 5 ¾-length romp in Friday’s sixth race at Laurel Park.

Both jockey Feargal Lynch and Tricks to Doo ($2.20), a bay son of Into Mischief trained by Arnaud Delacour, emerged unscathed from the $40,000 maiden special weight for 2-year-olds. The winning time for six furlongs was 1:09.98 over a fast main track.

Tricks to Doo, purchased for $600,000 as a 2-year-old in training in March and one of today’s The Racing Biz horses to watch, settled in second outside My Chinumado as the 45-1 long shot went the first quarter-mile in 22.54 seconds. Lynch, holding onto the colt’s mane after his inside rein broke, kept the 1-9 favorite in the clear and took command around the turn after a half-mile in 45.80.

Once straightened for home Tricks to Doo opened up on his rivals after going five furlongs in 57.77. Talon came with a late run for second, 2 ½ lengths ahead of Start With Yes in third. Tricks to Doo began to drift out past the wire and Lynch was forced to dismount as the winner took a right turn on the path that leads to the paddock, where he was quickly caught.

“We jumped out of the gate today and the first jump the rein snapped, so I just had to just try and nurse him around. He was much the best horse,” Lynch said. “Once he got past the wire he knew where to go back to the paddock and I had to just bail out.

“I was lucky I wasn’t hurt and the horse is OK, that’s the main thing,” he added. “I was steering him with just the mane and the bridle and I’m shouting for the outriders past the wire. She came over but by that stage the horse had already gone down to the paddock. That’s a first. That can go in the book.”

Tricks to Too, out of the Polish Numbers mare Doolittle, ran third by 2 ¾ lengths under Lynch in his unveiling Oct. 7 at Keeneland behind Rubus and Conquistador, the latter a $2.45 million 2-year-old in training purchase in April.

“He ran really well at Keeneland. He came up against two very nice horses,” Lynch said. “We always thought he was a really nice colt.”