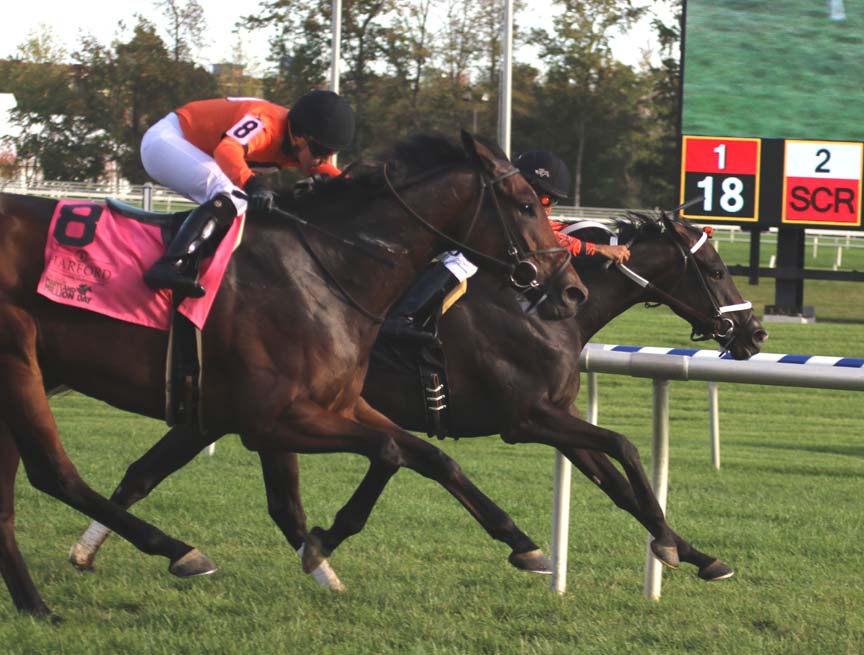 My Sistersledge squeezed through along the inside to win the Maryland Million Ladies on the turf. Photo by Laurie Asseo.

“We’re having fun breeding in Maryland,” said John Banner. “A lot of fun.”

Because of the increasingly generous bonuses? he was asked.

And why not? My Sistersledge, a horse he and his wife Cheri bred and own, had just snuck through along the rail to score a mild upset in the $125,000 Maryland Million Ladies, nosing out Great Soul, who led throughout but could not hold off My Sistersledge’s last bid.

The win was the Banners’ first Maryland Million triumph and trainer Mike Trombetta’s seventh. It was also a fine example of the threads that connect the equine generations and the humans who interact with them.

Etched, a multiple graded stakes winner by Forestry who stands at Bonita Farm, is out of the Unbridled’s Song mare Unbridled Elaine. She won the 2001 Breeders’ Cup Distaff for owner Roger Davenport, who’d purchased her for $230,000 at the 1998 Keeneland November mixed sale.

Unbridled Elaine was bred by Golden Orb Farm and David Schwartz; Schwartz and the Banners are close friends, all living in Florida.

After her racing career, Unbridled Elaine was sold, in foal to Forestry, for $4.4 million. That foal would eventually be named Etched.

When she sold, Schwartz said, “I remember the daughter of Mr Davenport, who had just passed away, she was out weeping. I said, ‘I hope this makes your year, for your dad’s sake.’

“She said, ‘You know what, you made my dad’s life in the business with that horse because he bought Unbridled Elaine and that was the best horse he ever owned.'”

From there, the bug jumped to John Banner.

“John was always a fan of that mare, since we were good friends,” Schwartz continued. “So he followed the mare right through to the stallion Etched. He bought like a quarter interest in the stallion Etched and sent a lot of nice mares to him.”

In return, Etched has now given him a Maryland Million winner.

My Sistersledge, whose only prior win had come in maiden claiming company, now has two wins from 11 starts. The three-year-old, also a Maryland-bred, has career earnings now above $127,000.

And Cheri Banner saw it coming all along.

“I really liked the way she looked as a yearling,” she said.

When John Banner suggested she name the filly, she didn’t hesitate.

“Of course, Sister Sledge was a singing group,” she explained. “My sister, probably from the time we were 15 years old, we called each other Sledge. John said, ‘Why don’t you name the filly,’ and I immediately said, ‘My Sistersledge.’ It took me about 10 seconds.”

It took Sister Sledge, the singing group, several years to find their stride. And now it looks like the band’s namesake horse, My Sistersledge, is finding hers.