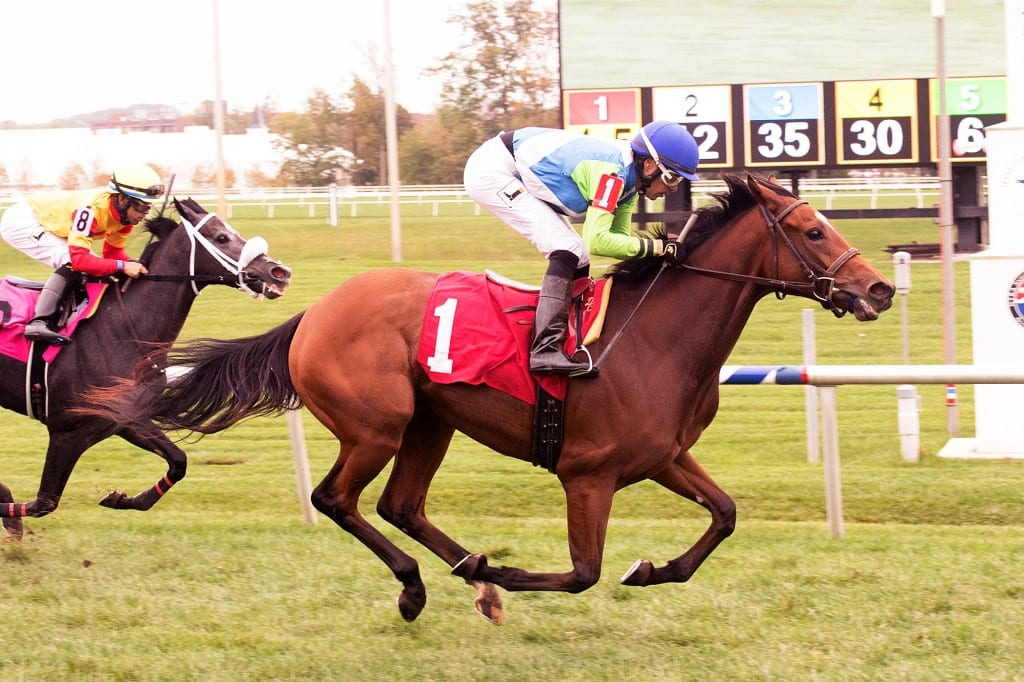 Lael Stables’ homebred Madame Milan, a juvenile half-sister to 2006 Kentucky Derby (G1) winner Barbaro, took advantage of a stretch out in distance to earn her first career victory in a competitive maiden special weight that kicked off Friday’s nine-race program at Laurel Park.

Madame Milan ($3.80) was favored at 4-5 in the $40,000 event that attracted 10 2-year-old fillies including progeny of Hall of Famers Ghostzapper and Tiznow, Kentucky Derby winners Orb and Street Sense, and fellow Grade 1 winners Giant’s Causeway, Ice Box, Paynter and To Honor and Serve.

By 2006 Preakness (G1) winner Bernardini out of the Carson City mare La Ville Rouge, Madame Milan completed 1 1/16 miles in 1:46.93 over an All Along Turf Course layout labeled firm. It was 1 ¼ lengths back to runner-up Dancingwithpaynter, who was 6 ¼ lengths clear of Luna in third.

Madame Milan ran third by a length in her debut going about 7 ½ furlongs on the Delaware Park turf Sept. 9 after having been tabbed as a The Racing Biz Horse to Watch. Today, Madame Milan settled under jockey Daniel Centeno from the rail post and saved ground racing in mid-pack squeezed to her outside by Ferdinada as Dancingwithpaynter took the field through fractions of 24.07 seconds, 50.29 and 1:15.84.

Madame Milan continued to gain ground inside around the far turn and into the lane before Centeno swung to the middle of the track to reel in a stubborn Dancingwithpaynter and edge clear for trainer Arnaud Delacour.

“She ran pretty good the first time at Delaware going 7 ½. I told Arnaud that going farther is going to be easier for her,” Centeno said. “Today the track was pretty soft and she broke a little slow so I just sat off the pace and waited to run and when I put her in the clear in the stretch she just took off. I went to put her outside [Dancingwithtpaynter] and she went right to the lead and galloped out real good and everything. I think the distance helped her a lot.”