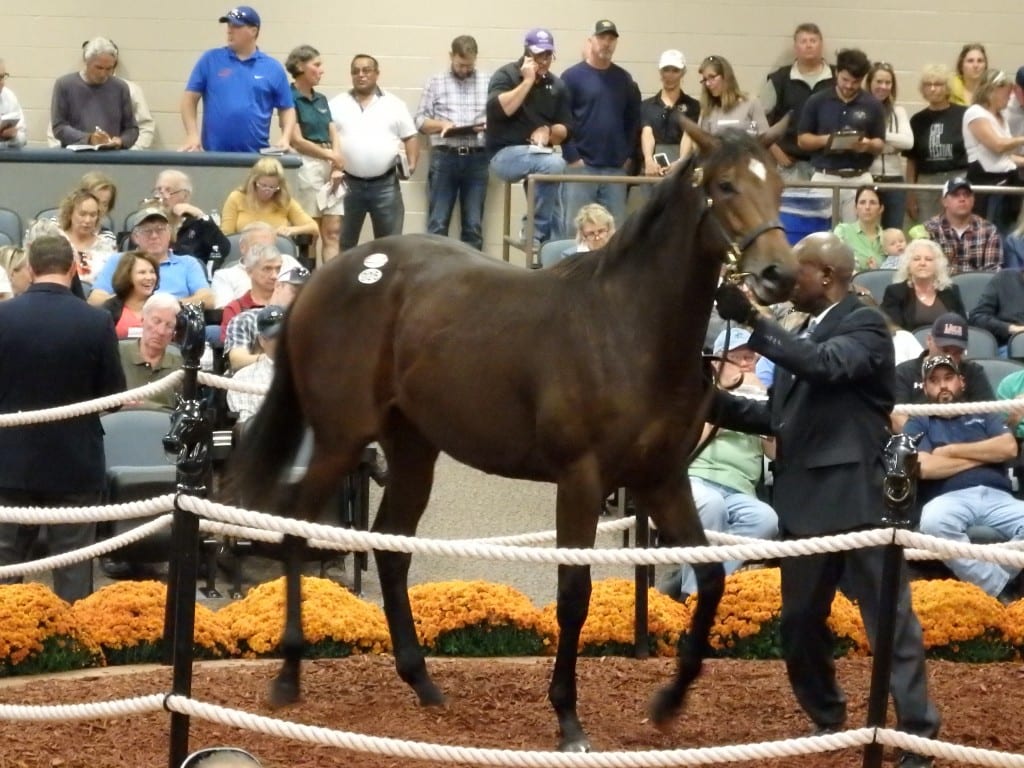 Day one of the Fasig-Tipton Midlantic fall yearling sale concluded with gains in the average and median versus 2016. The numbers aren’t strictly comparable, though; the sale, expanded to two days and nearly 500 hips, is much larger than the 323 hips who went through the ring in a one-day sale in 2016.

That leaves about 70 percent of the horses still to go through the ring. Hips 151 through 495 will sell Tuesday, with action to commence at the sales pavillion at the Timonium fairgrounds at 10:00 a.m.

Region-breds powered the sale’s first day, with horses bred in Maryland, Virginia, and West Virginia perched atop the leaderboard.

A Maryland-bred Lookin At Lucky filly consigned by Candyland Farm, Hip 119, brought the day’s top winning bid, of $175,000, from Springhouse Farm. She’s out of the Malibu Moon mare Slow and Steady and a half to four stakes horses.

Hip 28, a Virginia-bred Bodemeister filly out of the graded stakes winner Pink Champagne, by Awesome Again, also brought a big number. Consigned by Audley Farm Equine, she fetched a top bid of $140,000.

Hip 77, a West Virginia-bred Maclean’s Music filly rang the bell at $135,000, the third-most of any horse on the day. Out of the Fastness mare Rowdy Woman, she was consigned by Bill Reightler on behalf of of her breeders, David and Susan Wantz.

“Just look at her: she’s beautiful. She’s big, elegant,” said David Wantz. “She’s a little downhill. Everything about her just says racehorse. And we’ve been a big believer in Maclean’s Music since he went to stud.”

She was bought by Cary Frommer, who, coincidentally, sold the Wantzes the best racehorse they’ve owned, the Grade 1 winner Dance to Bristol.

Two other Maryland-breds also zoomed past the $100,000 mark.

Hip 35, a Bodemeister colt out of the stakes-winning Pure Prize mare Plum, brought a top bid of $125,000, also from Frommer. He was consigned by his breeder, Dark Hollow Farm.

“He’s a lovely colt,” said Dark Hollow’s David Hayden. “He had no faults. He was very smooth.”

That’s typical of Plum’s offspring, Hayden said, although neither of her two of racing age has raced.

Also topping the six-figure mark was Hip 26, a Maryland-bred Tizway filly out of the Carson City mare Piano Bar. Ellen Charles’s Hillwood Stable was the top bidder on her, offering $120,000. She was consigned by Chanceland Farm, which bred her.

“She’s a helluva filly and it’s an explosive family,” said Chanceland’s Bob Manfuso. “Tizzarunner set a track record at Laurel and might be just getting into himself. And she’s a lovely filly.”

Trainer Rodney Jenkins, who advises Charles on her purchases and trainers her runners, agreed.

“She is a nice filly. She walked good,” he said. “She’s a full sister to a stakes winner. She’s Maryland-bred. She’s all the things we were looking for.”