For Delaware Park’s Mooney, racing’s in his blood

Delaware Park’s director of racing, John Mooney, has been involved in racing in the Mid-Atlantic Region for almost 30 years and while he is a familiar figure on the grounds here, many people don’t realize the rich and varied resume the Canadian brings to his position.

The Mooney family’s racing heritage dates back some three generations. Mooney’s grandfather, J.D. Mooney, won the 1924 Kentucky Derby aboard Black Gold and later went on to be a successful trainer, conditioning the 1962 Canadian Horse of the Year, Crafty Lace.

Crafty Lace was himself an interesting story: a late-season claim who turned around to win four straight races for Mooney, including the third leg of the Canadian Triple Crown, the Breeders’ Stakes.

John’s father John J. Mooney was one of the driving forces behind the reorganization of racing in the province of Ontario, working with the Ontario Jockey Club when that organization opened the “new” Woodbine Race Course in 1956. For 18 years he served as first general manager and then president of the OJC and saw the Canadian International Stakes rise to take a place of prominence among the world’s top turf stakes. The great Secretariat won the International in his final race. The elder Mooney was elected to the Canadian Racing Hall of Fame in 1989.

But neither of Mooney’s two familial predecessors in racing ever had to deal with the mid-Atlantic’s cut-throat competition – both between racetracks and among tracks, casinos, and other types of gambling now widely prevalent. 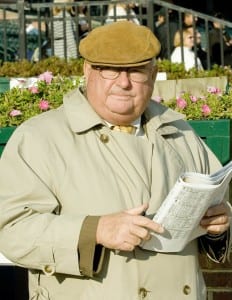 “We know we’ve got serious competition for the racing dollar,” Mooney said recently from Delaware Park. “But we also feel if we can continue to give our horsemen a good place to stable, a good surface to race over, and a decent place for their help to stay, those who try Delaware Park will come back and race with us year after year.”

It’s fair to say that Mooney’s background and family history give him a leg up in understanding what it is that horsemen value in a racetrack.

“I worked on the backstretch as a young man, working in my grandfather’s stable during the summer when I wasn’t in school,” Mooney recalled recently. “Then later I went to work in the racing office and served in several capacities there. Later I went into the racing services area of the industry, working for United Totalizator and later with Lee Mendelson, who had the photo finish contracts at a number of tracks around the country. He later purchased Jones Precision Photo and we were the ones who first introduced color photo finish prints to the industry.”

Mooney accepted his first position in race track management when he was hired by Joe De Francis to run the Maryland Jockey Club. Later he headed up the drive to establish racing in Virginia as head of Maryland/Virginia Racing, an offshoot of the MJC, as that group organized the opening and operation of Colonial Downs. The effort to make Virginia a part of the Mid-Atlantic racing scene ultimately ran aground.

William Rickman Sr. hired Mooney as general manager of Delaware Park, a post he served in for more than 10 years. When gaming came to the state Mooney moved on, but he returned to Stanton at the request of Bill Rickman Jr. to help with Delaware Park’s struggling racing program.

That was 2008, and since his return the track has maintained its position in the Mid-Atlantic racing scene despite seeing Pennsylvania’s rise and Maryland’s resurgence as a regional racing power, both with the advent of gaming.

Mooney and his staff spend the year checking charts and past performances from other tracks, constantly on the lookout for stables that would be an asset to Delaware Park should they stable here. Then during the winter months Mooney, racing secretary Jed Doro and others put in a lot of legwork on the backstretches of tracks in the South, meeting with horsemen and extolling what Delaware Park has to offer.

“We feel we have some of best facilities and accommodations around,” Mooney pointed out. “Mr. (William) Dupont designed the backstretch area here many years ago strictly with the horse in mind. There are lots of grazing areas between the barns, we have a good training track and turf gallop and it’s simply a horse-friendly environment.”

Over the years, Delaware has developed a reputation as a track where many horses who go on to do important things get their starts. That roster includes 2011 Horse of the Year Havre de Grace, Grade 1 winner Hard Spun, and others.

That’s not by accident. While the day-to-day racing product has much in common with that of other regional tracks, the list of leading trainers here is dotted with the names of high-end barns like Larry jones, Mike Stidham, and Tom Proctor.

“We understand that high quality stables may have some stake and handicap horses, and those types will have to ship elsewhere at times for races,” Mooney said. “As long as those stables use our races when they have horses that fit them and support our program, then it’s a good deal for all concerned. It’s important to build relationships with trainers and owners and have a sense of trust between the parties.”

If you visit the Delaware Park backstretch in the morning or go to the races later in the day and find yourself around the paddock or racing office, you can be sure you’ll see John Mooney at some point in time. He strolls the grounds daily, stopping often to speak with owners and trainers.

John Mooney’s main focus day in and day out centers around racing, from the ground up. After all, it’s in his blood.