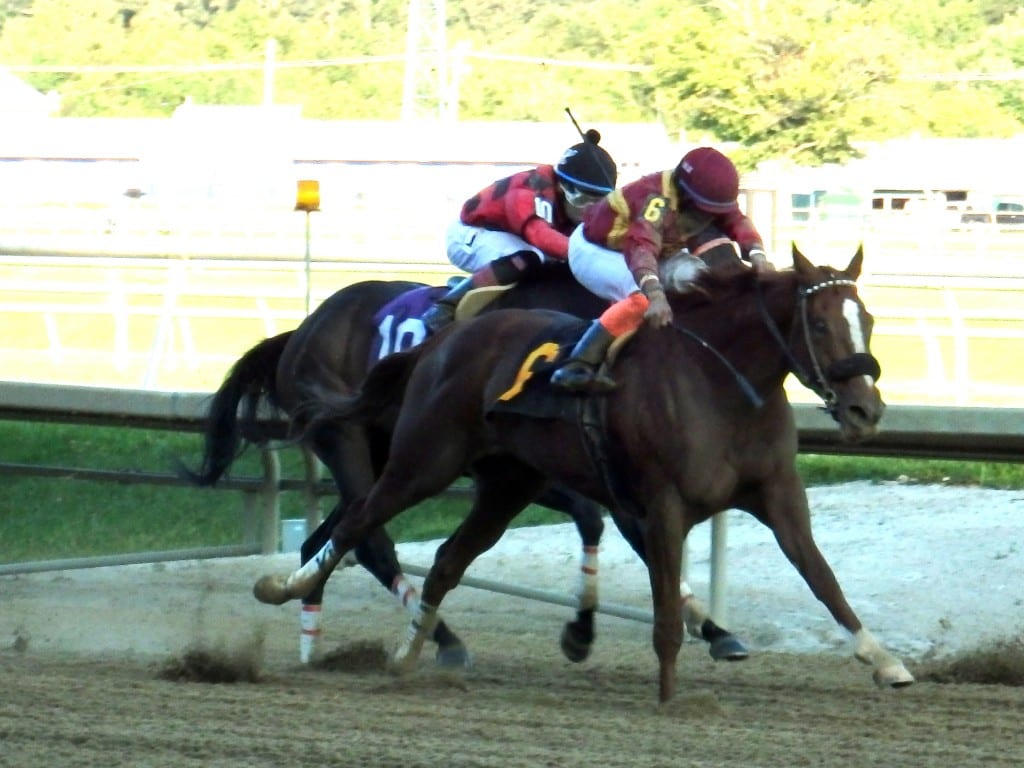 Line of Best Fit was along late to win the Shine Again Stakes. Photo by The Racing Biz.

A year ago, It’s the Journey was a mediocre two-turn horse stuck at the first allowance level. Meanwhile, Line of Best Fit was a moderately successful sprinter who mostly seemed not to have the speed needed to compete with better speedsters.

This year, It’s the Journey found his mojo sprinting, while Line of Best Fit came into her own running around two turns. And today, they met in the middle, both becoming first-time stakes winners in seven-furlong tests at Laurel Park.

“He keeps surprising me. Early on we thought he was a two-turn horse,” said Mike Trombetta, trainer of It’s the Journey. “We tried that a couple times and it blew up, and we went back to the drawing board.”

Line of Best Fit entered the day with superior credentials, but It’s the Journey was perhaps the day’s most impressive winner. Under Alex Cintron, It’s the Journey bided his time off the speed while four wide, took over nearing the quarter pole, and widened to a decisive 4 1/4 length score in the $75,000 Challedon Stakes, restricted to three-year-olds and up that had never won a stake. Running time for the seven furlongs was a sharp 1:22.86.

“His last three races were really good, but this is a real step up, and the way he handled it, pretty impressive,” said R. Larry Johnson, who bred and owns the Maryland-bred Mineshaft gelding. “The way he does it, he does it so easily. He’s awfully good.”

It’s the Journey entered 2017 with a single win from six career starts. But this year, though It’s the Journey has both the breeding and the body type of a two-turn horse, they directed their energies to sprinting him. They also put blinkers on him. Since then, he’s won five of eight — including, now, four straight — and never finished worse than third.

It’s the Journey paid $5.40 to win as the second choice in the salty field of six. The exacta, with Rockinn on Bye in second, was good for $31.40. It was another four lengths back to Red Dragon Tattoo in third. Favorite Afleet Willy, who led early, was fourth.

With three allowance wins and a stake win under his belt, It’s the Journey is pretty much out of easy spots. But with his recent form, that may not be a problem. He now has six wins from 15 starts, and the winner’s share pushed his career earnings past $215,000.

“I wish the (Grade 3) General George was next week,” Trombetta half-joked.

“He belongs in that kind of race,” Johnson agreed.

Two races after the Challedon, Line of Best Fit joined the ranks of stakes winners with a late-arriving score in the $75,000 Shine Again, restricted to fillies and mares three and up who had never won a stake.

With J. D. Acosta up, Line of Best Fit closed gamely between horses to run down leader Summer House in the late stages of the seven-furlong event to win by a half-length. It was another half-length back to 37-1 shot Lake Ponchatrain in third.

“I said to myself, ‘We’re in trouble,’ and all of a sudden she squeezed through the hole,” Magee said.

Proctor, who races as Sheffield Stable, agreed. “Approaching the turn, I said she had no shot. To do what she did is just indicative of her will to win. She knows where the wire is and she wants to beat everybody,” he said.

Line of Best Fit had run a monster race two back, finishing third and just three lengths behind the great Songbird in the Grade 1 Delaware Handicap. Last out, in a 6 1/2 furlong, $50,000 open allowance at Timonium, she finished with a rush but fell a nose short. It was her first sprint start after four straight routes.

That race came on September 4. It seemed likely to preclude a start in the Shine Again. But…

“Coming back in five days, I was a little scared,” Magee admitted.

“I’m the numnut who said, ‘Hey, why don’t we wheel her back in five days?'” laughed Proctor.

Magee said he had picked out a different race, a two-turn event at Delaware Park. But he and Proctor decided that, with the speed they’d put into her for the Timonium race, the seven-furlong Shine Again might hit her between the eyes.

“I think when she gets in company she gets even more competitive,” Proctor said. “I don’t know how she got through there, but then she stretches out and wins. She’s an amazing mare. She’s all hickory.”