My day as the Timonium on-air handicapper 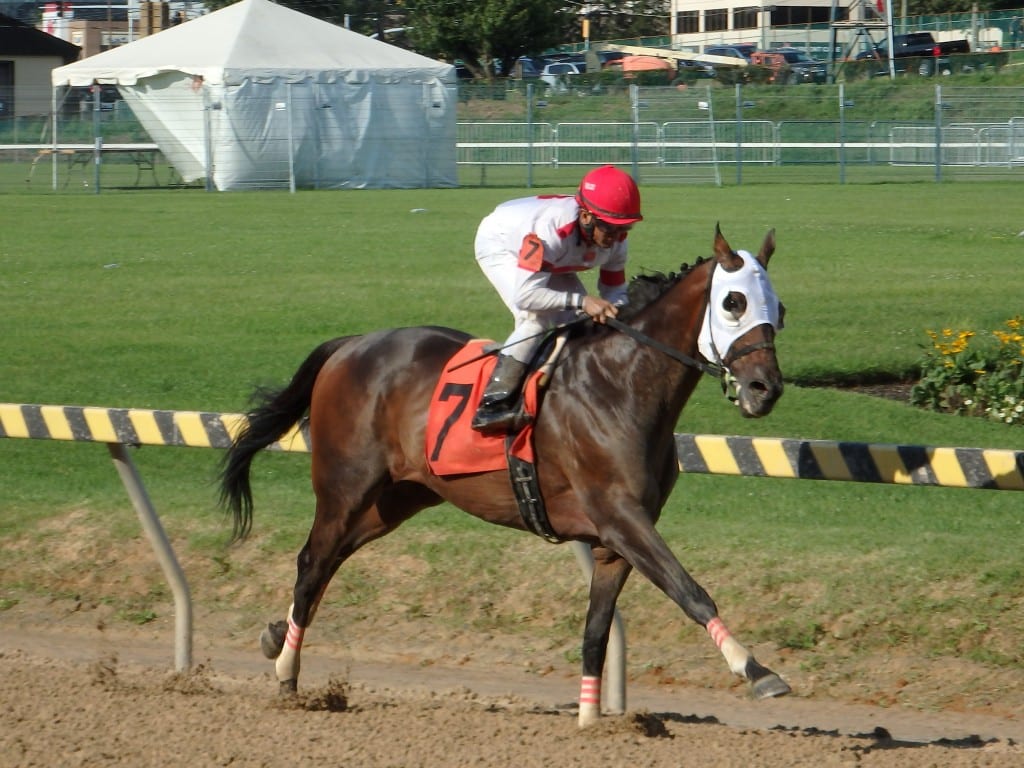 Transparent won a starter allowance at Timonium. Photo by The Racing Biz.

On Sunday at the Big T, I made my first foray into serving as the track’s on-air handicapper, joining Jackie Savoye on the simulcast feed in place of Stanton Salter, who was under the weather.

Probably my last foray, too.

You learn some things when you spend the day under the bright lights talking up Timonium’s live racing product – or at least, I learned some things.

One of the things I learned is that, while a friend recently described an on-air handicapping gig as a “dream job,” it ain’t my dream.

For one thing, there’s this: as a bettor, I often pass on races that don’t interest me or where I have no opinion.

As an on-air handicapper, not only do you not have the option of passing a race, but you also must have a strong opinion on every contest. And that opinion can’t be, “Man, these are some slow horses.” Or, “Heck, I wouldn’t bet this race with your money.”

Then there’s the way time works during the day. You’re only on the air for an hour or so, which in itself isn’t overly taxing. But because it’s chopped up into nine separate segments, your day becomes an alternating sequence of being Mister-Happy-TV-Guy and, well, waiting. Which makes for a strange day.

I also learned that, sometimes, you just have to eat the chalk. Five of Timonium’s nine races were won by the favorite, and most of those were less than even-money. The day’s first Pick 3 paid $6.90 on a 50-cent wager, and the last returned $12.25.

In the fourth, I was happy to see my top selection, Prank Call, romp home with a 14-length win, particularly since the Anthony Farrior trainee was 6-1 on the morning line. Except that by post time he was the second choice and paid a paltry $5.60 to win.

And finally – most importantly – I learned that I really need new friends. One of my current – former? – friends took the opportunity of seeing me doing the broadcast to throw things at me.

Another texted me after we’d picked the third race to do two things: first, to disagree with my selections and pick a horse I’d left off the ticket altogether. And second, to share this insight: “I’ve heard that TV adds pounds, but I never knew it added ugly.”

The good news is that the horse he liked – and I didn’t – finished up the track, while one of my selections won.

The bad? It only paid five bucks to win.

NOTES Two more wins for jockey J. D. Acosta on Sunday at Timonium gave him 12 for the meet and wrapped up leading rider honors. Acosta has 12 wins, five more than his nearest pursuer, Gerald Almodovar, and Almodovar is not riding at the Big T Monday. Acosta is also the leading money earner among jocks with $213,812, about $12,000 more than Almodovar earned during the stand. Acosta has a mount in every race Monday… Among trainers, Kieron Magee and Kevin Patterson are head-and-head for the money title, separated by less than $100 while well clear of the rest of the field. Magee has five entered today, while Patterson has just one, though both have a runner in the $50,000 allowance feature…