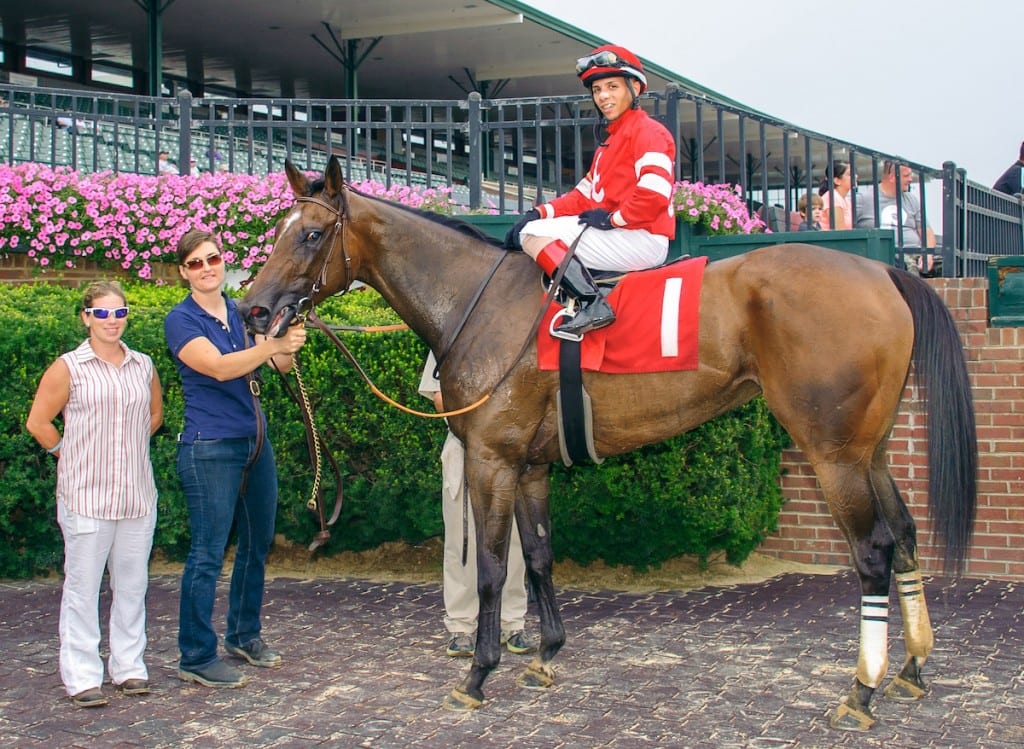 Female thoroughbred horses trainers, like female thoroughbred jockeys, are no longer novelties in the business, but they are still a distinct minority in racing. Statistics show approximately 14 percent of all jockeys are women, and the percentage is pretty close to the same with female trainers.

Those small numbers don’t make things easier for women in the industry, but it’s also a game where hard work and talent can overcome antiquated beliefs.

One woman making a dent in outdated mindsets is Erin Wilkinson, a 33-year-old native of Georgia who is in the midst of her first full year as head trainer of her own stable. Wilkinson has eight head at Delaware Park this summer and through August 23. the fledging trainer has four winners from 17 starters at the meeting, a 24-percent strike rate.

Running her own stable is the latest step in a race track education that started for Wilkinson when she was going to school in Kentucky.

“I needed to earn some money while I was in school and wound up walking hots and running horses at the Kentucky Training Center.” Wilkinson recalled. “As time went on, I began to get on horses, learned how to gallop and work them, and for a time I worked at Winstar Farm (one of the top racing and breeding organizations in racing) helping to work and break their young horses. I also was lucky enough to work for a time with (Hall of Fame trainer) Carl Nafzger, and that was a great learning experience.”

Eventually Wilkinson decided she wanted to try her hand as a jockey, and she pursued that off and on for about five years before she decided her future might be not as a jockey but a trainer.

“I had mixed success as a rider, but being on horses every morning was what I enjoyed the most,” she said. “Then I worked for two-and-a-half years as an assistant to Tom Proctor and it was that period that convinced me that being a trainer was what I wanted to be. I learned a lot being around Tom, and what I learned during my time working for him gave me the knowledge and confidence to strike out on my own.”

Wilkinson got a horse named Swiss Confederate and won her first start as a trainer when he won an optional allowance claiming race at Delaware Park last October. Later in the fall she saddled Swiss Confederate to win at Churchill Downs and wound up with two wins from six starts in 2016.

Last week she ran a filly named Bistro for $8,000 and that one paid immediate dividends after being claimed for $5,000 two races back. As it happened, Wilkinson had claimed the horse from her old boss, Tom Proctor.

“I told him before she ran for the $5,000 I was going to put a claim in for her, and he said he understood, that she was in for a tag and he would just as soon I got her because he knew I’d take good care of her,” Wilkinson said. “I knew there’d be a shake (more than one claim ) for her but we were lucky enough to win the shake. We’re trying to find the right spot for her next. We’re hopeful her last race was the beginning on something good for her.”

Wilkinson usually gets on most of her own horses but is currently sidelined as she recuperates from injuries suffered Easter Sunday in a freak accident at the beach.

“I was looking for starfish and accidently dragged my knee over some shells and laid it open big time,” she explained ruefully of the injury to her patellar tendon. “There was some damage to the knee and a lot of work had to be done to close up the cut so I haven’t been able to get on my horses in the morning for some time which is killing me. I’ve been getting on the pony for a while now so hopefully I’ll be able to get back up in the morning. It’s crazy, I never got hurt bad working horses in the morning or riding races and I wind up getting injured going to the beach. Go figure.”

Wilkinson’s main client is Ricky Sullivan, an oilman from Alabama, and Wilkinson owns shares in several of her horses. She’s quick to point out the management and racing office at Delaware Park have been a big help to her and has high praises for the main racing strip.

“The folks in the racing office have been great to someone like me with a small outfit and the race track is great to train over, my horses love it,” Wilkinson concluded, “We’re learning as we go along and hopefully the stable will be able to grow and expand. If you work hard good things happen.”