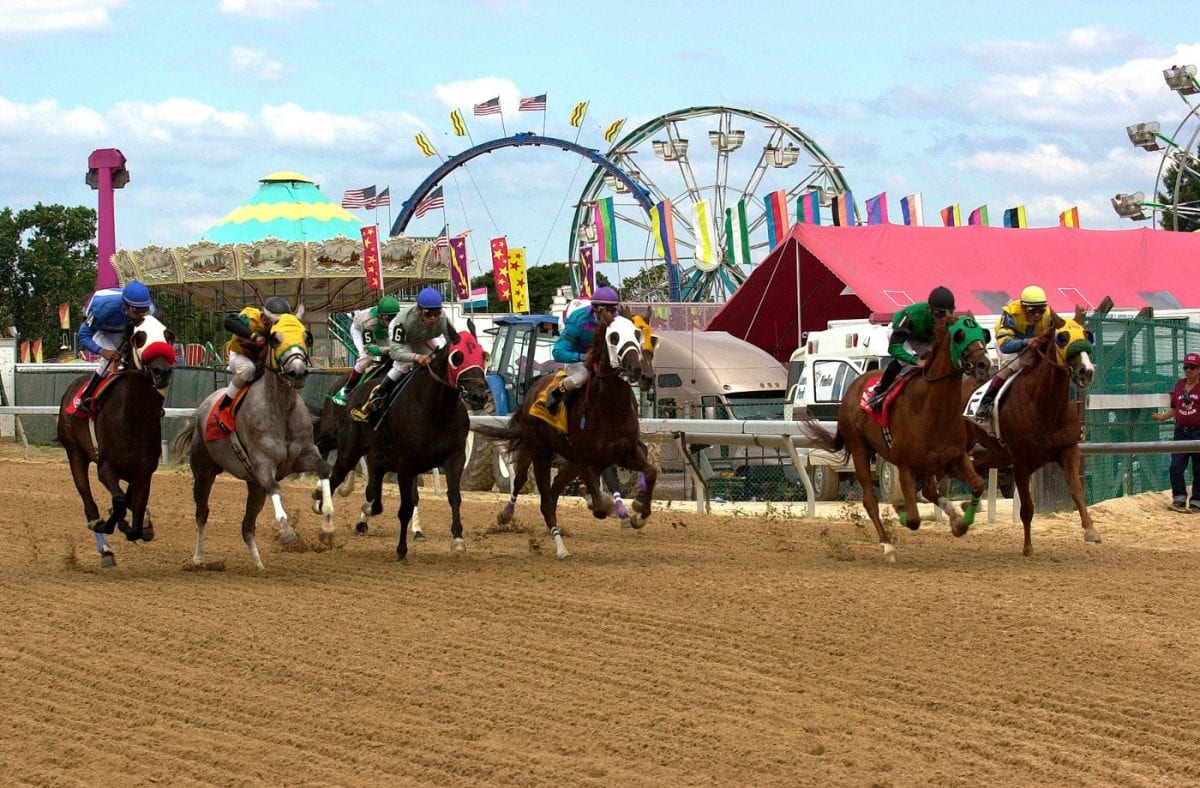 Young Jason Schoenthal, now at the turning from seven to eight, wasn’t too impressed with Keeneland when he went there a couple of years back.

He recognized, his father Phil, a Maryland-based trainer, said, that Dad having a horse in at Keeneland was important.

But, he lamented, there was no Ferris wheel.

For the next week-and-a-half, though, Jason and the rest of Maryland racing will decamp to the one East Coast track where there is a Ferris wheel, Timonium, for seven days of live racing at the Maryland State Fair. Racing kicks off August 25 and concludes September 4, with live racing taking place each Friday through Sunday, plus Labor Day. Post time is 1:05 p.m.

“We look forward to it,” Phil Schoenthal said. “It’s a change of pace.”

“I love Timonium,” agreed trainer Kieron Magee. “Timonium was the first track I galloped at when I came to this country in 1982.”

Schoenthal’s four 2016 wins at the Big T placed him second in the trainer standings, one win behind Claudio Gonzalez. Magee won three times, ending up in a four-way tie for third.

It is, indeed, a change of pace. Its bullring configuration leads to the running of four-furlong dashes – a distance virtually never run in Maryland outside of the very first baby races – 6 ½ furlong races contested around two turns, and 1 1/16 mile contests around three turns.

“It gives you the opportunity to run your horses in some different kinds of spots than Laurel or Pimlico,” Schoenthal said.

Trainer Wayne Potts, whose 24 2016 starts at Timonium were by far the most of any trainer, said that he likes to have a plan going into the meet.

“I like the bullring meet. I tend to have a couple horses that like to go a half-mile,” he said. “So 45 days out, we’ll try to figure out who can handle the bullring and who can’t.”

Those who can, he said, typically are horses with tactical speed who don’t leave themselves too much to do when they hit the short stretch.

Those who can’t include horses with a tendency to get out around the turn.

And apparently Potts has plenty of horses he believes will fit the bullring this year. He said that he entered 18 horses over the first two days of the meet, with seven of them getting in.

Timonium’s been known, Schoenthal said, as “a place to take your lesser horses and maybe get some bonus money” for Maryland-breds.

Whether that holds true this year, though, remains to be seen. Entries through the first two days have been surprisingly robust, a result, said Bill Reightler, Race Meet Coordinator and board member of the Maryland State Fair and Agricultural Society, of the hard work of the Fair’s racing committee and Georganne Hale and the racing office – and of increased purses.

Purses at the Big T are slated to average $185,000 daily. That puts them nearly on par with Maryland’s so-called mile tracks, Laurel Park and PImlico.

“I can’t help but be optimistic about the meet,” Reightler said. “I don’t see how it could be going any better, and the thing is we have some quality races.”

Foremost among those is the first running of the 6 ½ furlong Coalition Stakes, which takes place August 26. The Coalition – so named to represent the partnership among the state’s racing interests – has a base purse of $75,000. Maryland-breds finishing in the top three are running for an additional $25,000 in bonus money, and a Fasig-Tipton Midlantic sales grad who wins earns another $10,000.

Six of the nine horses entered are Maryland-breds, and two of those went through the Timonium sales ring. So the Coalition could end up being worth as much as $110,000.

Either way, it will be the richest race ever run at the State Fair, Reightler said. It will go off as the ninth race of a 10-race card.

Potts has entered Formal Summation in the Coalition, while Magee counters with Struth, who won Delaware Park’s Hockessin Stakes two back.

Win or lose, Magee knows what he’s doing once the race is over.

“I love the Fair food,” he said with some reverence. “As an Irish boy, my first stop is the lamb stand.”