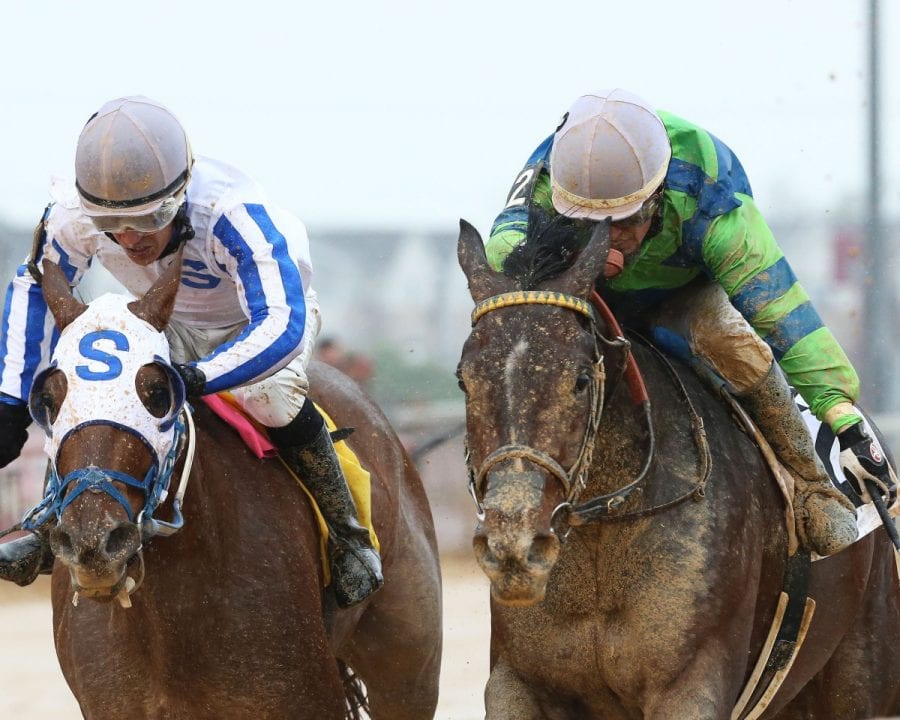 Hot Mic (inside) prevailed in the Coin Collector Stakes. Photo by Coady Photography.

The seven-furlong test will also go a long way towards determining which horse tops the West Virginia-bred three-year-old division at Charles Town this year.

Favoritism falls on Aaron’s Tap (2-1), from the powerful Jeff Runco barn. Runco has 43 more wins than his nearest rival for the training title, Ronney Brown, and Aaron’s Tap began his career like he’d add significantly to that lead. He broke his maiden by a half-dozen lengths and followed that up with an allowance score. But in his stakes debut, when the 2-5 favorite in April’s Coin Collector, Aaron’s Tap broke a step slow and was never much involved en route to a fifth-place finish.

Aaron’s Tap hasn’t raced since the Coin Collector, and this will be his first try around two turns, making short odds a bit of a concern. Arnaldo Bocachica, leading the colony with 92 wins, will ride.

Only two runners here have previously won a stake. Unrideabull (7-2), for trainer Michael Sterling, swept to a six-length victory in last year’s Henry Mercer Memorial for juveniles at the 4 1/2-furlong distance, but he faltered as the favorite when stretched out to 6 1/2 furlongs in the Vincent Moscarelli Memorial. He was third in the Coin Collector and then recorded a flashy allowance score last out, in June. The Bullsbay gelding will have Carlos Castro up.

Hot Mic (15-1) and jockey Matt McGowan prevailed in a 20-1 upset in the Coin Collector in a frantic finish. That gave the Fiber Sonde gelding two wins in two tries, but he’s now lost three straight; and his two efforts around two turns have been disappointing, fifth- and sixth-place finishes against allowance foes. McGowan will ride once again for high percentage trainer Ollie Figgins, III, winning at a 23 percent clip at CT.

Only three in here own a win at the distance. Brass Bull (5-1), another Runco trainee, won a seven-furlong allowance two back. But he’s finished second in five of eight starts, versus just two wins, and regular pilot Bocachica picks Aaron’s Tap instead of this runner; Gerald Almodovar will do the honors instead. Lewis Craig, Jr. trainee Prince of the Road (12-1) owns two wins at the trip, including a determined score in allowance company last out. Luis Batista will ride. And the lone career score, in 11 tries, for Jacky’s Man (10-1) came at this distance. Antonio Lopez rides for James W. Casey.

Only one other runner is in single-digit odds. Tampered Character (6-1) has two career wins and hasn’t been worse than third in five starts. Fredy Peltroche will ride for trainer Michael Weeks.

The Leavitt is race seven on the eight-race card. Post time is 9:49 p.m.