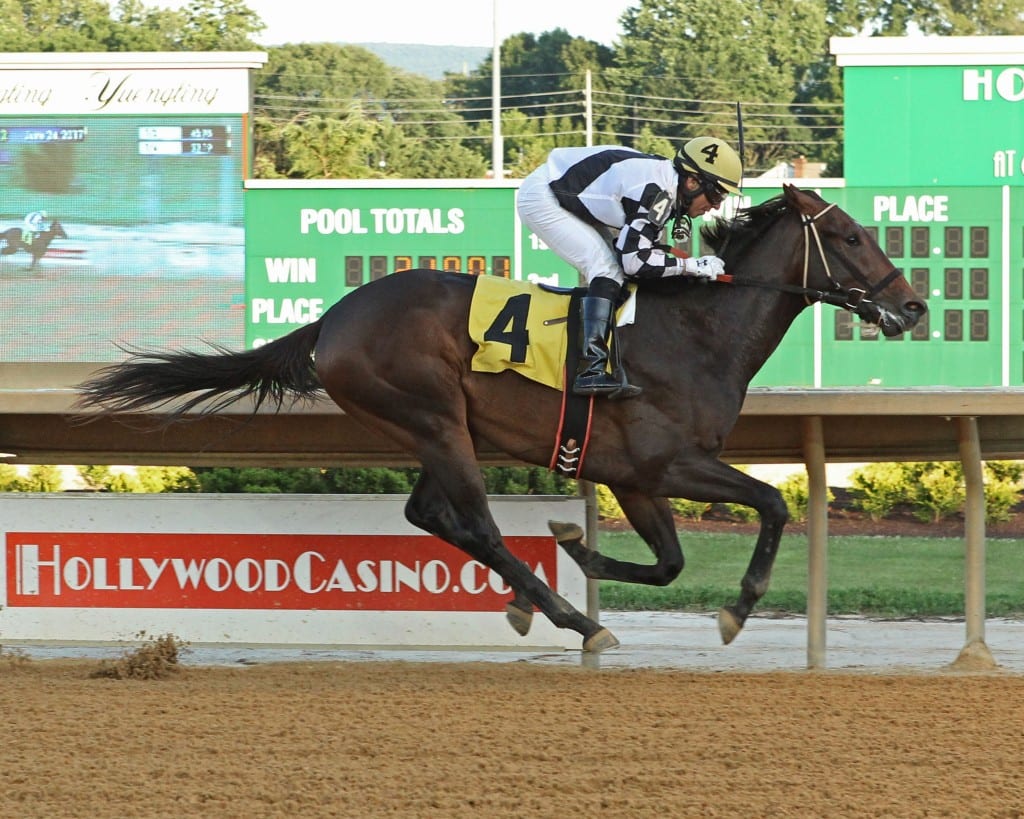 During a prolonged riding career, William “Ray” Lewis, Jr. won over 2.600 races, including several stakes aboard former state-bred star Onion Juice, and eventually earned a spot in the Charles Town Hall of Fame as a jockey.

As a trainer, though, Lewis has found the road to success a far more difficult path to travel, recording only seven winners from his first 95 starters. But his first winner of 2017 might represent the turning point in his career as a trainer and a breeder.

On Saturday evening, June 24 at Charles Town, True Heir left a lasting impressing on local racegoers when the juvenile son of Wildcat Heir that Lewis trains captured the track’s first one-turn maiden special weight event for two-year-olds of the season by six lengths in 52.49 as the 2-1 second choice in the field of seven with Gustavo Larrosa aboard. True Heir broke alertly to duel with one rival briefly down the backside then began to draw clear on the far turn and eventually romped home as six lengths the best in a very promising career debut. True Heir is also co-owned and co-bred by Lewis and Louis Rogers.

“He’s really well-bred and I was expecting a big race from him,” said Lewis. “I gallop him in the morning so I know what he can do. He’s always shown me a lot of quickness, a lot of ability. I let the jockey [Larrosa] work him a couple of times before that race and he went three furlongs in 35 and chance and then went a half in 47 and change. So, I knew he was ready for his first race.”

True Heir is a son of Wildcat Heir and out of the Bwana Charlie mare, Truly Theresa, who failed to win a race in four career outings. He was foaled and raised on Lewis’s farm just outside of Charles Town, and he was sent to co-owner and co-breeder Louie Rogers in Florida to be broken. After undergoing his initial introductions into what racing involves, True Heir was sent back to Lewis this spring to begin more rigorous gallops with the former local riding champ aboard and then eventually the trainer handed the reins to one of the track’s current leading riders.

Lewis, 66, enjoyed the bulk of his success locally in the 70’s and 80’s well before slots provided the main fuel for the purse account. His career began to wane considerably in the 90’s and during the last 10 years that he recorded only 21 wins from 421 mounts. He won more than 100 races in 1978 and again in 1980 and just missed that total in 1992. Other than Onion Juice, his most memorable mounts occurred aboard Whispy’s Lass, a Virginia-bred daughter of Turn To Mars who won 10 of 45 starts, earned $150,000 and finished second in the 1981 edition of the Grade II Barbara Fritchie Handicap at Bowie Race Course six months after winning the Sadie Hawkins Stakes at Charles Town.

Lewis had been the regular pilot of Onion Juice during a three-year stretch from 1985-87 when he won the Albert Boyle Memorial Handicap three times and then won the first edition of the West Virginia Breeders Classic. Thirty years later, Lewis, whose last mount was in 2009, the same year both he and Onion Juice were inducted into the Charles Town Hall of Fame, is hoping to find a place in the winner’s circle on the track’s biggest night for state-bred runners.

In the meantime, Lewis has mapped out a tentative plan for True Heir. It starts Saturday with a one-turn allowance dash on the main track at Delaware Park on the undercard of that track’s signature event, the Grade I, $750,000 Delaware Handicap for fillies and mares.

“I don’t think he’ll mind shipping,” Lewis said. “He rode up from Florida with no problem. He’s always been a calm horse. After that race I would like to run him in a 5 1/2-furlong stakes on the turf at Monmouth and then keep him here for the state-bred races. He’s paid up to everything, the Mercer [on Sep. 23], the West Virginia Breeders Classics [on Oct. 14], the West Virginia Futurity [on Nov. 4] and the Tri-State Futurity [on Dec. 23]. He should do alright in those races. I’m expecting him to do well in those stakes.”

As can occasionally happen when a two-year-old makes an impressive debut, prospective bidders emerge to make offers or entertain some discussion of potential sales, Lewis said he was approached by longtime local leading trainer and former jockey, Jeff Runco, about possibly purchasing the son of Wildcat Heir privately. Runco did not make Lewis an offer, but the co-owner, breeder and trainer of True Heir admitted there was one acceptable price for the colt.

“When Jeff Runco asked me if he was for sale, I told him he wasn’t,” Lewis said. “But then he asked me how much I would take and I told him I wanted $200,000 for him. He didn’t come back with a counter-offer.”