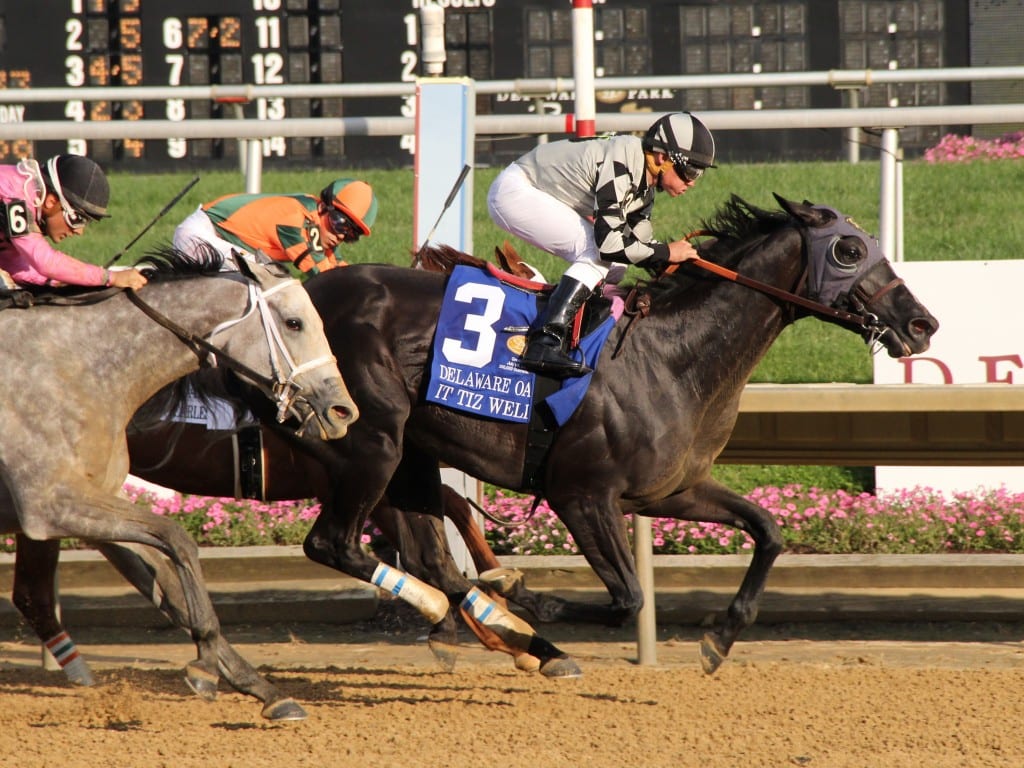 It Tiz Well prevailed in the Grade 3 Delaware Oaks. Photo by Jesse Caris.

“I don’t get to travel with Songbird,” joked Dan Ward, assistant to Jerry Hollendorfer, who trains that superlative filly, this afternoon at Delaware Park.

Perhaps not. But he does get to travel with It Tiz Well, and as consolation prizes go, that’s not a bad one at all.

It Tiz Well, a three-year-old Arch filly out of the multiple stakes-winning Tiznow mare It Tiz, enjoyed a perfect stalking trip under Drayden Van Dyke before powering on to a half-length victory over the game Proud and Fearless, who finished a head in front of the late-running Actress. It was Hollendorfer’s second Delaware Oaks victory, his prior win having come in 2010 with Blind Luck.

“She broke sharp and to be honest, she put us in a perfect spot, just off the lead,” said Drayden Van Dyke.  “The two horse (Proud and Fearless) was going nice and easy with her ears pricked, so I did not want her to get to far away from me.  But my horse was nice and relaxed the whole way and she kicked home very well.”

Proud and Fearless took the field through a half-mile in a comfortable 48.22 seconds and held a half-length lead over It Tiz Well, the 4-5 favorite, after three quarters in 1:11.87.

But Actress, the deep closer who upset the Grade 2 Black-Eyed Susan Stakes at Pimlico in May, began a rally rounding the far turn and loomed a serious threat in the stretch.

“Absolutely nervous,” Ward described his mindset at that moment.

It wasn’t his only moment of nervousness. Prior to the race, they’d had to fix one of It Tiz Well’s shoes in the paddock.

“It was almost a disaster,” Ward said. It was more drama than he’d wanted after he and Hollendorfer had sent the Tommy Town Thoroughbreds LLC-owned runner by plane from Southern California to New York and then by van to Delaware.

But all’s well that ends well, and It Tiz Well found the resolve to power home in 1:43.55. The victory, her fourth in eight starts, pushed her earnings to $466,840. It was also her second win in graded company, joining March’s Grade 3 Honeybee, at Oaklawn Park.

The race was her second wearing blinkers, the first having come just three weeks ago in the Grade 2 Summertime Oaks at Santa Anita Park.

“She’s better with the blinkers,” Ward said. “She’s looking around without them. She’s more focused with them.”

The casual handicapper might question that conclusion; in her first try with the shades, she finished fifth as the 6-5 favorite. But Ward said a closer look would tell the tale.

“You watch her last race, she had so much trouble,” he recalled. “She didn’t get a chance to run. That’s why we brought her back quick.”

They also put Van Dyke back aboard. He’d ridden her to her maiden score in December and then again in the Grade 2 Santa Ynez at Santa Anita, when she finished a distant second — but to the exquisitely talented Unique Bella. He’d gotten hurt after that but was happy to be back in action, and back aboard this filly today.

All in all, It Tiz Well is a talented filly moving in the right direction. The Alabama Stakes, at Saratoga, might be next, Ward said. That’s a Grade 1 race the barn knows well. After all, Songbird won it last year.