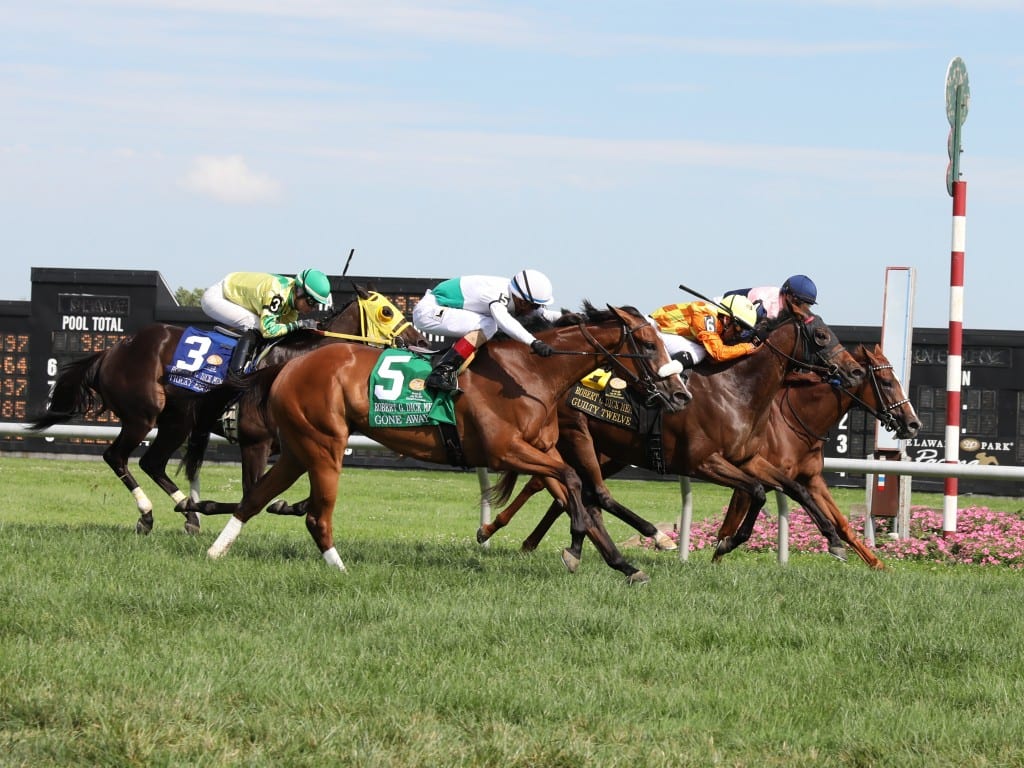 Guilty Twelve (#6, in between) was up in time in the Robert G. Dick Memorial Stakes. Photo by Jesse Caris.

Call it that Old Motion Magic.

For the second straight time — and the eighth time since 1997 — a horse  trained by Graham Motion triumphed in the Grade 3 Robert Dick Memorial Stakes, contested today at Delaware Park for the 21st time. This time, the win went to Guilty Twelve, who prevailed in a head-bobbing finish with post-time favorite Zipessa.

“It is funny how this race has been so good to me,” Motion said. “It really is extraordinary.  But this is a race I always have in mind because it seems like we always have a filly for this category.  Obviously, it is one of my favorite races these days.”

Speedy Bishop’s Pond made the early running, doling out the opening half-mile in a moderate 50.38 seconds. Zipessa poked a head in front after three-quarters in a quickening 1:14.50, and Bishop’s Pond re-asserted herself with a head advantage through a mile in 1:38.63.

But in a 1 3/8 mile race, the horses are still a long way from home after traveling a mile, and the cavalry was beginning to rev up. Bishop’s Pond would fade from the scene and ultimately finish eighth.

Zipessa and jockey Joe Bravo cleared to the lead entering the lane, and after a brief fright, Tricky Escape, who’d enjoyed a perfect stalking trip under Forest Boyce, was done.

But then Guilty Twelve, with veteran Chris DeCarlo in the irons, was beginning to mount a bid after navigating the far turn three and four wide between horses.

“I had a perfect trip and I had a lot of horse underneath me the whole way,” DeCarlo said . “The last eighth of a mile, I brought my stick out and hit her once and she did not really respond.  When I won on her last time, I did not really hit so much.  I hand rode her and she fought, so I put the whip away and hand rode her, and it worked.”

Guilty Twelve surged between and nailed Zipessa on the wire. The margin was a nose, with Gone Away another head back in third. The running time for 11 furlongs on firm turf was 2:17.23.

“She got a little worked up in the paddock,” said Adrian Rolls, Motion’s assistant who saddled the horse today. “He (jockey DeCarlo) got her into a nice rhythm on the backside. He said she’ll run all day.”

In the moments immediately after the race, other folks involved with Motion’s Herringswell Stable operation despaired; the result was that close.

Then, when Guilty Twelve’s number six was put up as the winner, they erupted in cheers and yelling.

Guilty Twelve now has won four of 10 career starts, four of seven since arriving, from Great Britain, to Motion’s barn. The win was her first in stakes company, pushed the Merry Fox Stables-owned runner’s career earnings past $260,000.

“She is a tough filly,” Motion said of the five-year-old Giant’s Causeway mare. “She is very honest and she really knows where the wire is that is for sure.  Chris (DeCarlo) gave her a beautiful ride.  I think she is improving and she is beautifully bred.”

NOTES  The card featured two other undercard events, with the featured Grade 3 Delaware Oaks the nightcap. In the $50,000 Dashing Beauty Stakes, a sprint for older fillies and mares, My Magician ran down favored Postulation on the money to win by a nose over that rival. Both are trained by Claudio Gonzalez. Running time for six furlongs was 1:10.21… In the $50,000 Cape Henlopen, contested a 1 1/2 miles on firm turf, Postulation romped to a six-length win at 11-1 odds in 2:30.23…

Frank Vespe, the founder and publisher of The Racing Biz, has owned, bought, sold, claimed, written, and talked about horses, in varying combinations, for a decade. Email him at [email protected]m or follow him on twitter @TheRacingBiz.