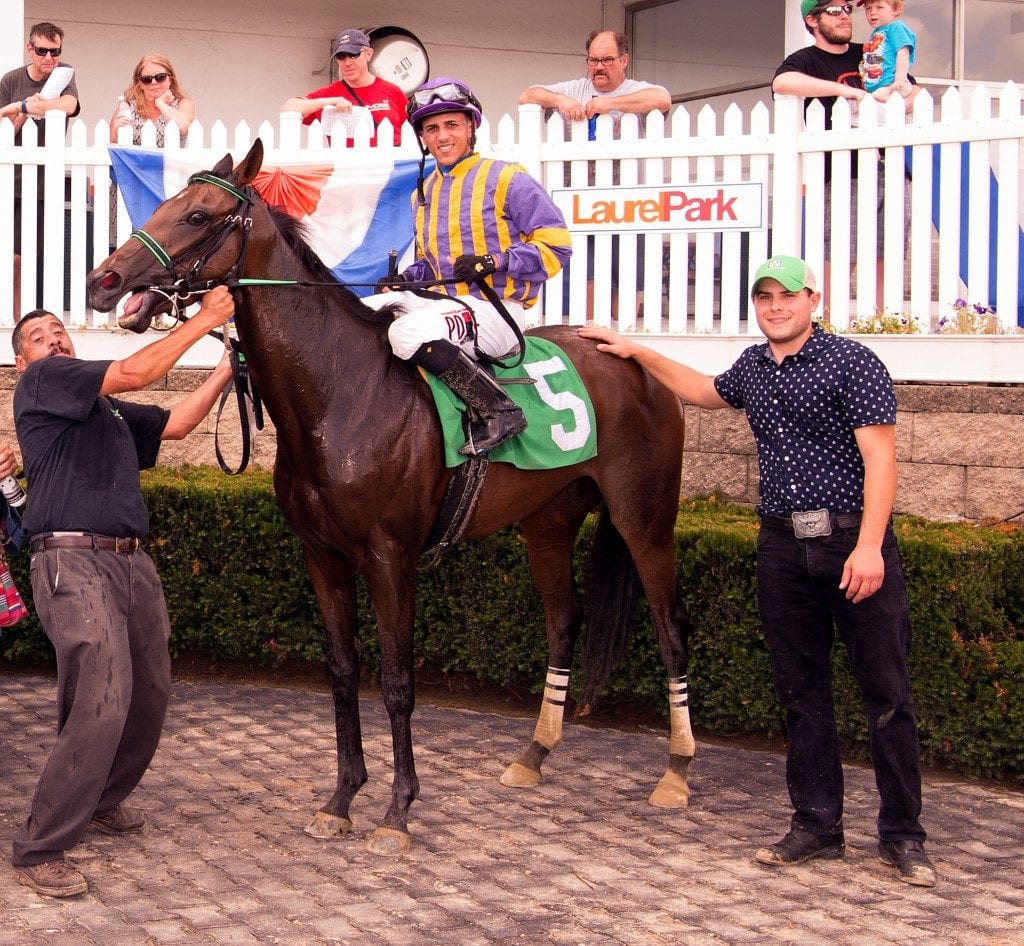 His fledgling career is all of a few months old, but already Noah Abramson is getting quite an education in the inevitable ups and downs of being a Thoroughbred trainer.

The first horse Abramson entered, Hunca Rock, made it as far as the starting gate for his racing debut before the 3-year-old gelding flipped following a delay in loading and had to be scratched from the June 16 finale at Laurel Park.

Two days later, the 25-year-old native of Woodbine, Md. won with his first official starter, 3-year-old filly Temple Sky, also making her career debut. On June 23, the next live racing day at Laurel, the Abramson-trained Davy’s Fancy finished a game second but was elevated to the win via disqualification.

Temple Sky, sent off at nearly 15-1, returned $31.80. Davy’s Fancy, another 3-year-old first-time starter, was dismissed at 25-1 and paid $61. The latter’s crowded winner’s circle photo didn’t include the horse, already on his way back to the barn when the original finish was reversed and the race made official.

“Even if he didn’t get put up, I loved the way the horse ran. He got bothered at the start and had some trouble in the race, and in the stretch he just kept fighting and fighting,” Abramson said. “For his first time in a race he showed a lot of heart. I thought he ran great.

“It’s really something, to have two starters and two long shot winners,” he added. “It’s hard to believe. I have to pinch myself to make sure it really happened.”

All three horses were bred and are part-owned by Carol Kaye, whose Kaygar Farm is located in Woodbine, about 35 miles northwest of Laurel. She partnered with Harbortown Stable on Hunca Rock and Temple Sky, and Jeanne Baker and James Boyce on Davy’s Fancy.

“He’s very enthusiastic, and that’s exciting,” Kaye said. “We’ve knocked heads about our ideas, but that happens. That’s racing. It’s great to see young people getting into the game. I’m still a fan of experience. I’ll always be a fan of experience, but nobody’s going to give you a shot to train. Generally people come up through learning under another trainer. I think Noah’s one of just a few to start this way.”

Abramson’s introduction to horses came through the show world, where he had success as a trainer and rider specializing in hunter-jumper and equitation, reaching the top ranks in medal classes at rated shows competing against some of the top horsemen in the sport.

He got a taste of the Thoroughbred game while galloping for well-established Maryland-based trainers Mike Trombetta and J B Secor, and ultimately landed a job breaking horses for Kaye.

“I was showing horses ever since I was 11 or 12 years old. I got involved in taking lessons and when I was 18 or 19 I was showing big-time jumpers and giving some lessons and breaking horses,” Abramson said. “My uncle owned a handful of racehorses and I really liked it.

“I galloped some horses for a little while and just kind of learned as I went along,” he added. “I went to work for Mrs. Kaye and I was breaking horses for her and said it was always something I wanted to do, train horses at the track.”’

In a sport inherent with risk, Kaye – one of the most popular and successful owners and breeders in Maryland – saw something in Abramson that convinced her the polite and hard-working young man deserved a chance.

“He’d been with me about a year on the farm. I didn’t know him with the show horses but I liked the dressage and the experience with basic dressage,” Kaye said. “I like to break my horses that way. I think it’s really important to be balanced and listen to the rider, so that’s what attracted me to Noah for breaking horses.

“Obviously I took a big gamble because it takes many years of experience to do really well,” she added, “but I liked the way Noah handled my horses. He spent a lot of time with them and I thought he deserved a chance at the track. He wanted to be a trainer and it sort of went on from there. I was able to talk my partners into agreeing with me and we thought, ‘Let’s go for it.’”

Though familiar with the care and training of horses, Abramson credited fellow Laurel-based trainer Tony Aguirre for giving him a necessary introduction into other basic aspects of the sport such as finding and selecting races and entering horses. Abramson kept his first horses with Aguirre until passing the trainer’s exam this spring and getting his own stalls in barn 18 at Laurel.

“I kept asking Tony, ‘When I bring some horses to the track one day could you give me a hand and maybe lend me stall or two and show me the ropes a little bit more?’” Abramson said. “I know how to take care of a horse and riding and all that is no problem, but the actual racing and the condition book and the little things I still needed some help. Tony was doing me a big favor.”

Aguirre, who first met Abramson when they were both exercising horses in the mornings, was swayed by Abramson’s enthusiasm and work ethic.

“He said, ‘I’m looking for someone to help me. Can you help me?’ I said, ‘Noah, because it’s you, absolutely,’ ” Aguirre said. “He’s just a great kid. Obviously he was naïve with the business, coming from the show world, just simple things he didn’t know. But, the horsemanship was there. Not just that, he can ride and get on his own horses. He asked, of course, a million and one questions. He’s handled everything well.”

Abramson said Hunca Rock emerged from his starting gate incident with only some cuts on his legs and was sent back to Kaye’s farm. He is due to return to Laurel and make his debut in the coming weeks.

“We were unlucky. We drew the one-hole that day with a first time starter and he went in there and stood perfect,” Abramson said. “Then a couple horses wouldn’t load and when one reloaded he made a big bang in the gate and that set my horse off. It was scary because he totally went over and was thrashing around. It looked really bad. He was banged up from his hocks down but most of it was just really bad scrapes.”

Temple Sky gave Abramson a different kind of adrenaline rush, tracking the pace before taking a short lead at the top of the stretch and drawing away to win the 5 ½-furlong maiden claimer by 1 ¾ lengths.

“She’d been training great. I didn’t put a bet on her but I thought she’d run well,” he said. “I was quiet the whole race. I was watching her run and extremely excited, and all of a sudden she’s making a move. I see her coming on up to the two horses in front and kick out wide and now I start to yell, ‘Come on, come on,’ and I thought, ‘Oh my gosh, we actually have a shot to win this.’ She went right on by them without a problem and ran the race like she had 20 starts under her belt. We were all excited as can be.”

Abramson’s early success, combined with a vote of confidence from horsemen such as Kaye and Aguirre, have helped smooth his transition and get him noticed by other owners.

“It’s exciting,” he said. “I’ve already gotten some phone calls from people that have seen me and I could possibly be getting some more horses in the near future, which is great.”