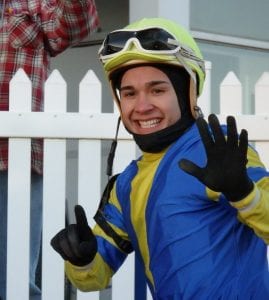 Nik Juarez struck a pose after winning six times at Laurel Park on January 11, 2016. Photo by The Racing Biz.

Nik Juarez led the hot riders at Delaware Park last week, winning with three of seven mounts and finishing second on another. Antonio Gallardo, who is splitting his riding duties among several Mid-Atlantic tracks, won on two of the five mounts he accepted.

Edgar Prado, a former mainstay in New York who now bases his operations in Maryland, won on two of three mounts he rode for trainer Graham Motion, while Kristen Swan won on two of the three Arabians she rode. 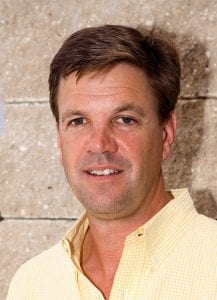 Long time Delaware Park veteran conditioner Sam Cronk lit em up last week, winning with two of the three horses he started while finishing second with the other he sent out.

We haven’t mentioned the turf course yet because the temporary rail has been set out 25 feet since the beginning of the meeting. Best advice for bettors when the rail is set this far out is to look for stalkers who will be able to tuck inside to the stretch and to avoid speed rivals who are liable to get caught wide. When the rail is set out 25 feet the turns are sharper and there is a shorter run out of the second turn to the wire. Horses who get caught wide, especially on the turns, have very little chance of winning.