Sales: Midlantic-breds and the middle of the market 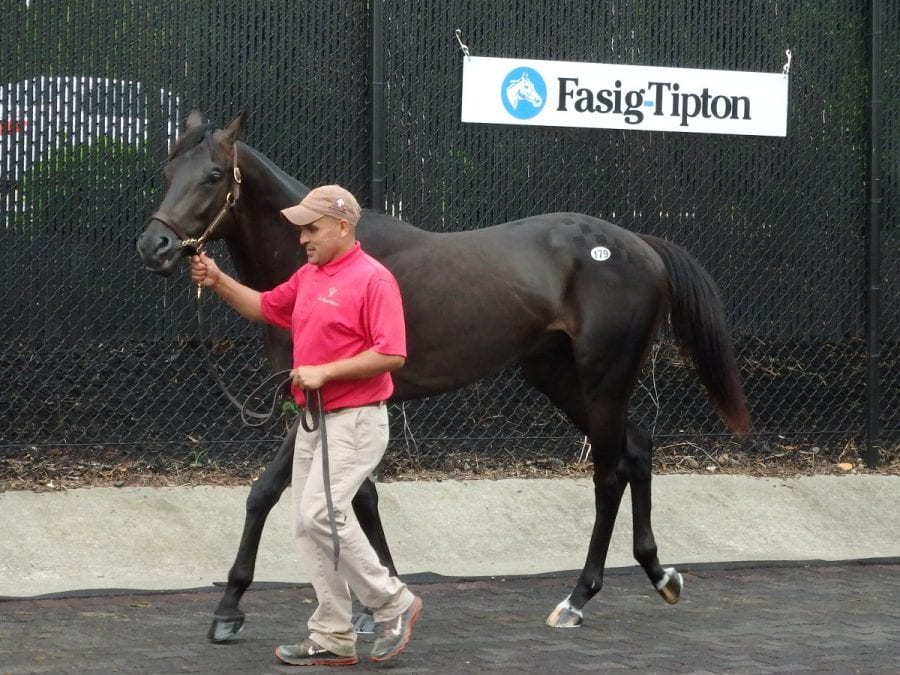 Liaison colt in the walking ring at the Fasig-Tipton 2-year-olds sale this afternoon.

The just-completed Fasig-Tipton Midlantic Two-Year-Olds in training sale stands out among the region’s sales as both the most important — its $25 million-plus in sales were more than triple the sales of the most recent Fall Yearling and Winter Mixed sales combined — and the only one primarily driven by horses bred outside the region.

The sale, which took place Monday and Tuesday at the Timonium fairgrounds, had everyone smiling, with gross sales rising by over nine percent versus the prior year and the sale featuring the highest-price horse ever to come through the Timonium sales ring.

While Midlantic-breds accounted for more than 50 percent of sales at the most recent fall regional fall yearling sale, here they comprised less than five percent of total sales.

Thirty-three of the 43 Midlantic-breds to go through the sales ring Monday and Tuesday at the Fasig-Tipton Two-Year-Olds in Training Sale at the Timonium fairgrounds left with new owners.

That was good news, as those numbers represented a solid buyback rate of just 23.2 percent.

The top seller bred in the region was Hip 521, a Maryland-bred. The Maclean’s Music colt, out of the winning Yes It’s True mare Martini, brought a winning bid of $120,000 from Tom O’Grady. Consigned by Woodford Thoroughbreds as agent, the colt worked an eighth of a mile in 10 ⅖ seconds.

Those numbers put most Midlantic-breds squarely in a place most market participants lament these days: the middle of the market.

Indeed, it’s perhaps the most common complaint in the marketplace: there’s plenty of money for horses that check all the boxes, but not much for horses in the middle.

There’s no question that the money was out in force for the box-checkers. The sale-topper, a Curlin colt, brought a winning bid of $1.5 million, a record for this event. It was one of a half-dozen horses to bring more than $500,000.

But what about those horses that don’t check all the boxes: those by regional sires, or out of unfashionable female families, or with physical imperfections. But what, in other words, about the middle? Is that still an area of concern?

Since 2007, the average value of the top quintile of sellers in this event has grown by almost 56 percent.

For horses in the middle three quintiles, on the other hand, the picture is not quite as rosy. That group of 198 horses accounted for total sales of about $8.3 million, one-third of the event’s total. The average was a little bit over $42,000.

The shrinking middle is a concern that’s not unique either to this sale or this region; read the comments after pretty much any sale anywhere, and they will sound this same alarm.

What’s it all mean?

For one thing, it emphasizes the importance of state-bred breeding programs. If it’s hard for breeders to make money upfront via the sales market, it becomes imperative for them to have other revenue streams, such as breeder awards.

For another, it points to the importance of regions like the mid-Atlantic bolstering their stallion rosters. Sales of young horses are driven by sire power, which currently is in short supply in the mid-Atlantic.

And finally, it points — yet again — to the need for the sport to attract new owners.

This week’s sale was unquestionably a big success, and it suggests that the long dark days of a declining horse market are at their end. The next big challenge: to rebuild an owner-breeder base decimated by the financial crisis to enhance the strength of all segments of the sales marketplace.