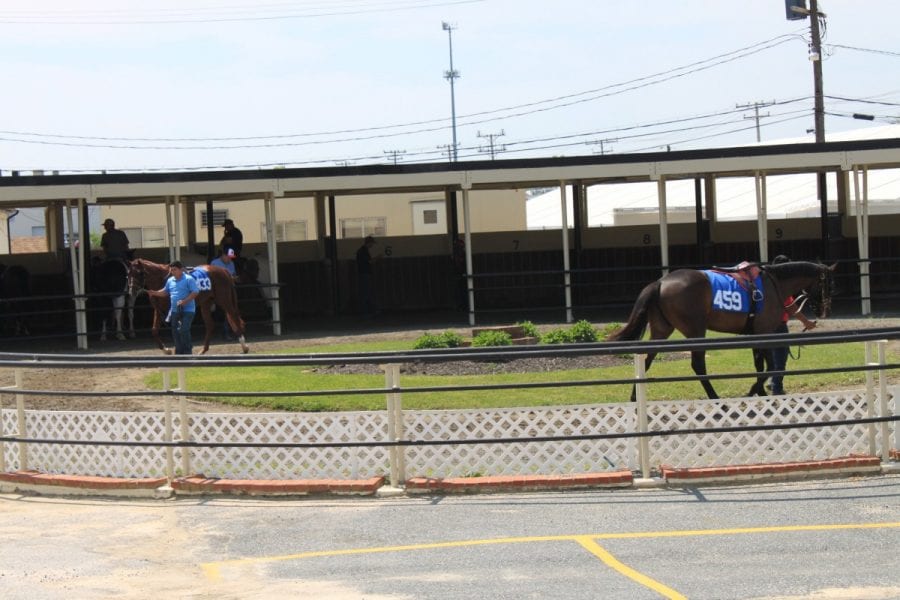 Horses in the walking ring at Timonium. Photo by Nick Hahn.

If current market conditions are any indication, the two-day Fasig-Tipton Midlantic 2-year-olds in Training sale, which kicks off Monday at 11 a.m. at the Timonium salesgrounds, should be a very hot venue.

“This sale has really grown into something special for buyers and sellers alike,” said Paget Bennett, sales director for Fasig-Tipton Midlantic. “Any time you have trainers and owners being upbeat it helps, and Maryland racing has really taken off. Hopefully we can get another million-dollar horse on the board this year.”

The last two editions of the Timonium juvenile venue have seen fillies hit the $1 million mark, with trainer Linda Rice and owner Chester Broman securing a daughter of Uncle Mo for that price in 2016. Last year’s sale also had a record high gross of $23,136,400.

A trio of young horsemen said they expected the upcoming Timonium sale, one that they’ve all patronized for several years, to follow the trend of this year’s 2-year-old market.

“Expectations are high here, especially coming off a very strong OBS April sale (in which average price was up nearly 15 percent from 2016),” said Pennsylvania-based consignor Clovis Crane, who will be offering 30 head. “There’s a buzz in the air. The catalog is very strong – the strongest I’ve ever seen it. Buyers will be very pleased at the horses offered this year.”

Crane, a third generation horseman whose farm is located about 15 minutes from Penn National, commented on several of his 2-year-olds.

“I have a New York-bred Pioneerof the Nile colt (Hip 368), that I took to Florida but he wasn’t quite physically ready for that sale, but now he’s doing fantastic,” said Crane. “He worked in 21.3 and galloped out really well. Also, I have a Pennsylvania-bred Old Fashioned colt (Hip 109) who had a bullet work (21.2) on the first day. He’s a big, strong, racey type, I co-own him with my father and another partner.

“As for fillies, I have an Uncle Mo filly (Hip 122, a Pennsylvania-bred) who should be well received, and a Flatter filly (Hip 43), who’s not that big, but she has a great mind and a beautiful mover,” he continued. “She worked in 10.1 and I hope buyers will pay attention to her.”

Joe Pickerrell and Courtney Roberts’ Pick View LLC, an Ocala-based operation, has a small but select consignment this year, topped by an outstanding I Want Revenge colt (Hip 250) and a Twirling Candy colt (Hip 574).

“The I Want Revenge colt has been one of our stars all year,” said Pickerrell, whose father, Bill, is a trainer in Ohio. Pickerrell and Roberts started Pick View several years ago, and offer breaking, training, and sales. “He’s big, athletic and classy, and a very nice mover. We also have a Flower Alley colt (Hip 8) who should be a very good racehorse, and the Twirling Candy colt is very athletic and precocious.”

“Action has really picked up this week,” he said. “We’re a smaller outfit and very hands-on with our horses – we train all of them ourselves. The market so far this year has been very healthy, and being smaller we have to be selective with what we offer. We’ve been at every 2-year-old sale in Florida this year. We’re careful at the yearling sales to find horses that can bring top prices as 2-year-olds.”

Brandon and Ali Rice’s Ricehorse Stables is another smaller consignor offering a select group of 2-year-olds, including two New York-breds.

The young couple, based in Ocala, both come from thoroughbred families. Brandon’s parents, Bryan and Holley Rice, have developed 2-year-old sale prospects for more than 30 years, while his aunt Linda Rice is a top New York trainer, and uncle Todd Beattie is a leading trainer based at Penn National. Brandon was a graduate of HH Sheikh Mohammed bin Rashid Al Maktoum’s Darley Flying Start Thoroughbred management program and worked for trainers here and abroad, including Todd Pletcher.

Ali Rice’s parents, Nick and Jaqui de Meric, are noted consignors based in Florida, and they have a robust group of 2-year-olds at this year’s Timonium sale.

“This is the third year that my wife Ali and I have consigned horses at Timonium,” said Brandon Rice. “We try and take a select few horses to the sale, usually those that are maturing in May. We also try and offer New York-breds, Pennsylvania-breds – those that will be attractive to the region. The size of the sale is perfect, and we like that it’s right after the Preakness so many of the big-name Northeast trainers attend.

As for their current consignment, Rice said, “We have a fabulous-looking Speightstown colt (Hip 370) and two nice New York-breds (a Freud colt, Hip 50, and an Emcee filly, Hip 486) that are the right type for the region. We also have a Paynter filly (Hip 356) that has been well-received so far – she has the body type to be suited for the northeast dirt tracks. She matured nicely and worked very well (10.2).”