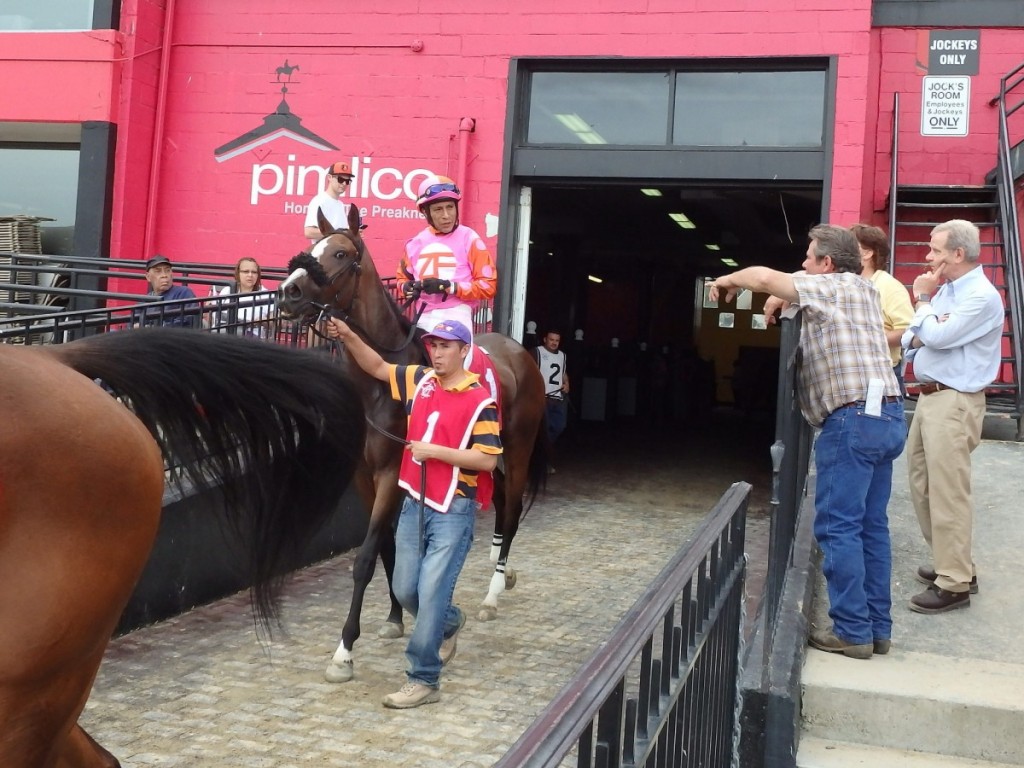 Edgar Prado at Pimlico. Photo by The Racing Biz.

While the connections of Three Rules are counting on a return to sprints translating to a return to the winner’s circle, those of Recruiting Ready are looking to keep his momentum going in Saturday’s $200,000 Maker’s Mark Chick Lang at historic Pimlico Race Course.

The eighth running of the six-furlong Chick Lang is one of two stakes for 3-year-olds on the undercard of the 142nd Preakness Stakes (G1), the Middle Jewel of the Triple Crown. It is joined by the $100,000 LARC Sir Barton to benefit the TAA, contested at 1 1/16 miles.

Shade Tree Thoroughbreds, Inc., Tim Fitzgerald and Geoff Roy’s Three Rules was a multiple stakes winner at 2, opening his career with five consecutive victories at his Gulfstream Park base. The streak earned him a date in the Breeders’ Cup Juvenile (G1), where he chased for a half-mile before finishing sixth behind eventual juvenile champion Classic Empire. Fourth in the Kentucky Derby (G1), Classic Empire tries again in the Preakness.

Three Rules was on the Triple Crown trail to start 2017, running second in the Feb. 4 Swale (G2) and third in the Fountain of Youth (G2), the latter behind Preakness contender Gunnevera and Practical Joke, who also went on to run in the Derby. Three Rules set the pace into upper stretch in the 1 1/8-mile Florida Derby (G1) April 1, tiring to finish fifth behind Derby winner Always Dreaming. He was only two lengths and a head behind runner-up State of Honor.

“He ran good in the Fountain of Youth, and the Florida Derby was a great race,” trainer Jose Pinchin said. “He’s doing great. He’s had two real nice works since the race. He’ll probably be the favorite for the race. It should be the right spot for him.”

A dark bay or brown son of multiple graded stakes winner Gone Astray, Three Rules has four wins and a second from five career sprint races, winning the Florida Sire Dr. Fager by seven lengths in his only try at six furlongs.

“The owners wanted to cut back with him, stop sending him going long and get him back to sprinting,” Pinchin said. “I think he’ll handle it. It’s a cutback, but it’s a good cutback in his favor. I think he’s a better sprinter or miler than he is a route horse.”

Sagamore Farm’s Recruiting Ready takes a two-race win streak into the Chick Lang, both at six furlongs. The bay Algorithms colt, based at the Fair Hill Training Center with trainer Horacio DePaz, captured an entry-level allowance March 10 at Laurel Park before earning his first stakes victory in the Bachelor April 13 at Oaklawn Park.

“He’s definitely in good form right now. He had that confidence booster in the allowance race at Laurel and he was able to step it up again and go to Oaklawn on a track that he had never been on. Just being able to run consistent again and a very fast time as well was good,” DePaz said. “The confidence booster really helped him out. He’s really happy with himself. I really think that race at Pimlico will be right up his alley. He’s been there before, he likes it, and he won there. It’s a track that suits his style of running, too.”

Recruiting Ready was a 10 ¼-length winner of his unveiling last May at Pimlico, stepping right into graded stakes company when second as the favorite to Classic Empire in the Bashford Manor (G3). From there he ran second but was disqualified to fourth in the Saratoga Special (G3) behind Gunnevera, was third to Not This Time in the Iroquois (G3), and third and 10th to Sonic Mule in the Buffalo Man and Mucho Macho Man at Gulfstream, the latter going one mile Jan. 7.

In the Iroquois, Recruiting Ready wound up just a head behind runner-up Lookin At Lee, who went on to place in three Grade 1 stakes including an impressive second in the Kentucky Derby.

“He ran against some very tough horses and has had some tough beats,” DePaz said. “Hopefully we can continue to build some confidence and get some momentum with him. We may give him a break after this race and just try to keep him together and then maybe go back to Saratoga. Right now we’re taking it one race at a time.”