For Preakness drivers, an exhausting week they can’t wait to relive 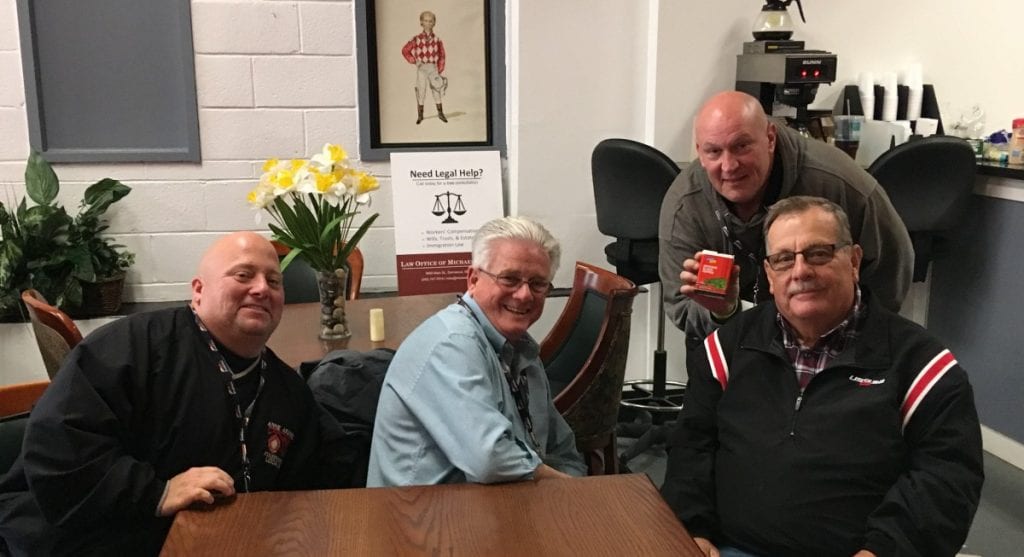 The week leading up to the 129th Preakness, in 2004, was unusually warm in Baltimore. Each day’s high was in the mid- to high-80s, roughly 15 degrees hotter than average.

And yet, come Preakness day, at least one runner — Smarty Jones — looked to be fresh as a daisy, and he romped to a record-setting 11 1/2-length victory.

What made the difference?

Phil Miller may have an answer.

He and another paramedic were accompanying Smarty’s owners, Roy and Pat Chapman, because Roy “needed a golf cart with an [oxygen] bottle,” Miller recalls. “Well, the trainer, John Servis came in, the night of the draw, it was hot as all get out that year, he was like, ‘Where can my wife and I go to get a box fan for the stalls?'”

Miller and the other paramedic weren’t about to spring the Servises loose in an area with which they were unfamiliar. So…

“Me and the other driver went over there, bought him a box fan, bought him an extension cord, and set up the box fan in his stall.”

And so, come Saturday, Smarty Jones was ready to roll.

On the Saturday prior to the Preakness, Doug Simpkins and three colleagues — Miller, Miller’s father John, and John Hafler, spend the morning putting “Official Preakness vehicle” decals on dozens and dozens of cars, vans, and sport-utility vehicles.

By the Wednesday before the Preakness, Simpkins will have 48 people in his employ. Simpkins coordinates the pool of folks who serve as drivers, assistants — and fan-buyers — for the Preakness connections.

“At 0800 everybody reports. They get their marching orders, pass out assignments,” Simpkins explains.

From Wednesday until folks go home — which, for people sticking around for the Fasig-Tipton Two-Year-Olds in Training sale at the Timonium Fairgrounds, may not be until Tuesday or Wednesday — the drivers will be there to smooth bumps and solve problems for Preakness contenders’ majority owners, trainers, and jockeys and their families.

Want to be out at the barn at 5:00 in the morning? Or stay late at a party? No problem; the drivers will be there.

“If you’ve never been to Baltimore, you don’t need to be riding around like, ‘How do I get to Pimlico?'” says Simpkins. “The drivers stay with the people the whole time — wherever they want to go, you take them. We provide the transportation so they can sit in the back and talk on the phone, run their business knowing that they are in good hands. They got a guy driving who knows where he’s going. You do your business, and I’ll do my driving.”

It may sound like drudgery, but all four men agree that it is “absolutely a blast.”

“We love when the owners come in early because they take pride in their horse and their trainers,” says Phil Milller. “To see their expressions and the way they deal with people, I haven’t had an owner yet who’s been condescending or ‘I’m better than you.’ They’ve all been really laid back and happy to have us.”

And all four take pride in the work they do.

“This is the best of the Triple Crown,” says John Miller. “Seriously. We’ve all been told that.”

“We want people to come to Baltimore and Pimlico and enjoy yourself,” Simpkins agrees. “Let us take care of the security and your ride and everything – just come and have fun. People love it – they send us letters.”

Simpkins is a retired firefighter, as is John Miller. Phil Miller and Hafler both are currently firefighters. In fact, virtually all of Simpkins’ four dozen drivers are current or former police or firefighters, he says, who usually are recommended to him or reach out to him via word of mouth.

“I can go with, you know, the brotherhood [to explain why],” Simpkins says, “and I can make sure these guys are trustworthy because we have people coming into town that are worth millions.”

There’s another benefit to having police and firefighters as drivers, Simpkins says.

“We’re great with directions. We know where you’re going.”

“People enjoy us and want us back,” says John Miller.

“I keep in touch with the Ramseys [Ken and Sarah] all year,” adds his son.

“Part of their Preakness experience”

“It’s amazing,” the four reply in chorus to the question of what it’s like when their owners’ horses win.

“The people are so gracious, they invite the guys in as part of the winning family,” Simpkins says, pointing to the others. “If it was not for him, him, or him, they would have had trouble getting here. You become part of their Preakness experience.”

So much so, says Hafler, that Steve Coburn, co-owner of 2014 Preakness winner California Chrome, invited Hafler to accompany the team to the Belmont Stakes that year.

“Hell, yeah, I went. I’m up there in the owners box,” Hafler recalls. California Chrome, of course, was unable to complete the Triple Crown, and Coburn famously went on a televised rant following the race.

That wasn’t the only place Hafler went with the Coburns, either.

“I took Mr. Coburn to Gettysburg. I was having a house built right after that race – had my final walkthrough Monday after the Preakness,” Hafler says. “They said, ‘Just drop off us in Gettysburg, we’ll do some sightseeing, you do what you have to do with your walkthrough, then pick us up back.’”

“That’s the personal touch we put out to people,” adds Simpkins.

In fact, all of them have a story or two like that with one common thread: going the extra mile. Sometimes literally.

Of course, having a funny or odd story is to be expected when you’ve been at it as long as they have. Phil Miller and Hafler are the relative babes here; Hafler’s first year driving was 2002 — “Magic Weisner was my first horse,” he says of Nancy Alberts’ Maryland-bred who ran a fast-closing second at 45-1 odds — with Miller having started the prior year.

Simpkins started on the track ambulance in 1976, with the driving gig coming up soon thereafter.

“During that time they had the Washington, DC International,” he says. “So [then-track owner] Mr. Frank De Francis, he needed a ride, and so we all hooked up and started to drive him – taking people over to DC, over to embassy parties, horsemen, and everything. So then it evolved here to the Preakness where we would supply vehicles and drivers to pick people up at airports, take them here and there.”

Simpkins obtains the fleet of vehicles, makes sure the paperwork and insurance are in order, hands out the assignments — and then lets the drivers take it from there.

So Wednesday — at 0800 — Simpkins’ brigade of drivers will report for duty. For the next few days, they’ll be on call as early, or as late, as necessary to ensure that the Preakness connections have the best experience possible.

It’s exhausting, but at the same time, not one of them would give up the opportunity. In fact, just as John Miller brought in Phil, Hafler’s 24-year-old son has begun to drive, too.

“I’ve gotten close to a lot of owners and jockeys,” says Phil Miller. “You miss them when they’re gone – it’s another year till we get to see them again.”