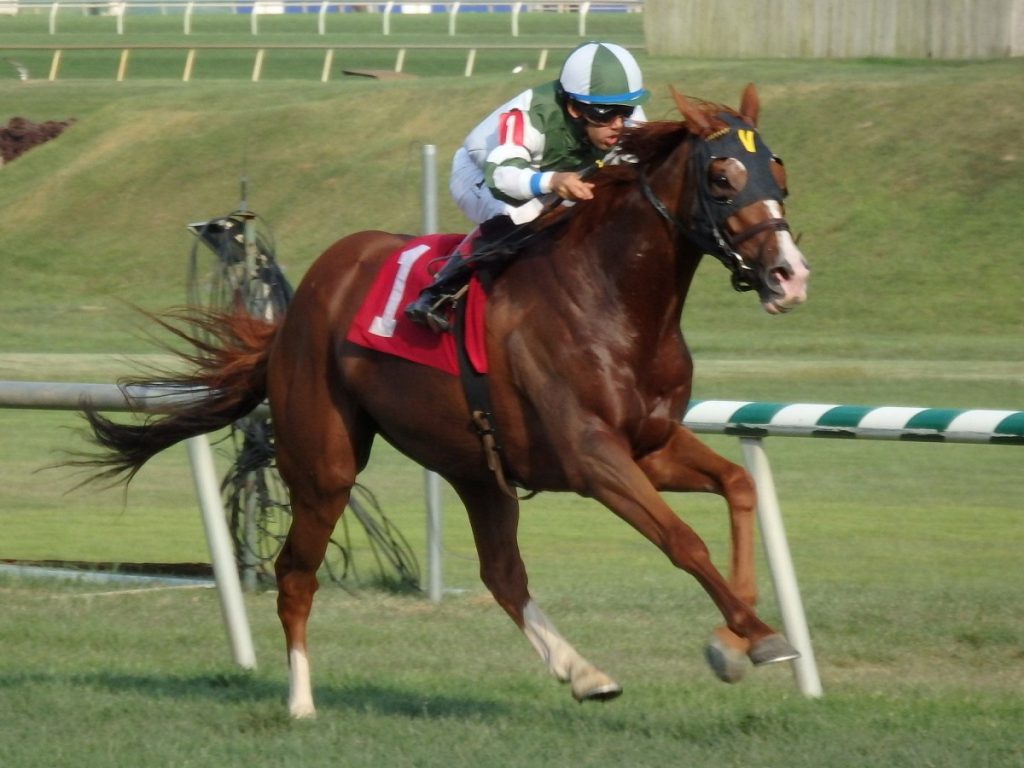 Renown, here winning the 2016 Laurel Turf Cup, prevailed in the Secretariat Stakes at Great Meadow. Photo by The Racing Biz.

Virginia’s “country racing” experiment uses the timing and tradition of steeplechase venues to create opportunities for primarily Virginia-based horsemen to race. Flat racers have been part of steeplechase cards for decades, but the concept of raising the level of flat races in popular one-day steeplechase stopovers in Virginia has been at least one answer for the 2013 closure of Colonial Downs.

For the last three years, the Virginia Equine Alliance has offered races out-of-state at Laurel Park and in-state at Great Meadow, where just shy of some 20,000 car loads attempt to cover The Plains. These “country races” have frequently generated double-digit fields.

Despite the lack of a starting gate, riders carrying somewhere near 145 pounds, and a course that isn’t completely oval or even at grade, if you squint your eyes a bit, it can resemble racing on the infield turf of any the mid-Atlantic racetracks that many of its participants have seen before.

In this attempt to expose flat racing to the large crowds that support steeplechase racing while offering Virginia horsemen a local racing opportunity, country racing may have created its first superstar.

Renown, in Saturday’s $50,000 Secretariat Stakes at Great Meadow, never fell more than three lengths off the pace, assumed the lead when Gotta Get Away left the course and won by over three lengths over the soft going on a relentlessly rainy day. With this victory, Renown is showing a range of versatility that few thoroughbreds get to display. 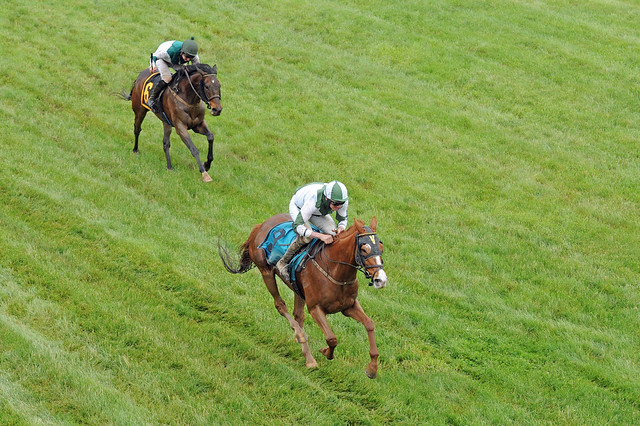 Trainer Elizabeth Voss has now gathered stakes wins for the Merriebelle Stable LLC star in an unlikely series of arenas: Laurel Park, Delaware Park, Keeneland — where he won the Grade 3 Sycamore — and Great Meadow. It’s safe to say that nobody has gotten home on that grand slam other than Renown.

Renown can actually add one more venue to his win list, Wexford Race Course in Ireland, in his first start. Bred in Great Britain by Juddmonte Farms, Renown is by the British sire Champs Elysees out of Fame at Last by Quest for Fame.

“I think he’d be a pretty good hurdler, but that doesn’t look like it will happen at the moment, the way he has been running,” noted rider Jack Doyle who delivered Renown to the winner’s circle on that soaking Saturday afternoon. “He’s schooled over hurdles and did just fine.”

With versatility like this, Renown could start next over hurdles or in your backyard, but more likely would be going two miles in the Grade 3, $400,000 Belmont Gold Cup Invitational on Friday, June 9th on Belmont Stakes weekend.

“There aren’t many races over a mile and a half in this country,” Doyle points out.

In the initial year of country racing, Jack Doyle and Renown delivered two wins at Great Meadow in allowance flats in 2015. In 2016, Renown faded on the soft going in the Secretariat, finishing behind Rum Tum Tugger and Mutasaawy, two horses Renown bettered in the 2017 edition. He has now won 7 of his 12 starts.

“He seems to be improving all the time,” added Doyle.

His only setback since last year’s Secretariat was when he finished third at Saratoga in the $100,000 John’s Call behind Mr. Maybe and My Afleet, coincidentally a horse that won the 3rd race earlier in the day at Great Meadow, going 17 furlongs over jumps.

In the other two flat races, favored Swellelegent won a $40,000 allowance flat at a mile and a half for trainer Neil Morris and owner Tom Hulfish. Leading only two in the 10-horse field at the half-mile pole, rider Gerald Galligan circled eight-wide to win by 10 lengths.

Hooping, bred by Hickory Tree Farm of The Plains, VA, went wire-to-wire in a $35,000 VA-bred allowance at a mile and a quarter for owner Debra Kachel and trainer Ricky Hendriks. Ross Gehaghty delivered the win in the finale.