With opening day at hand, Monmouth hoping for bounceback year 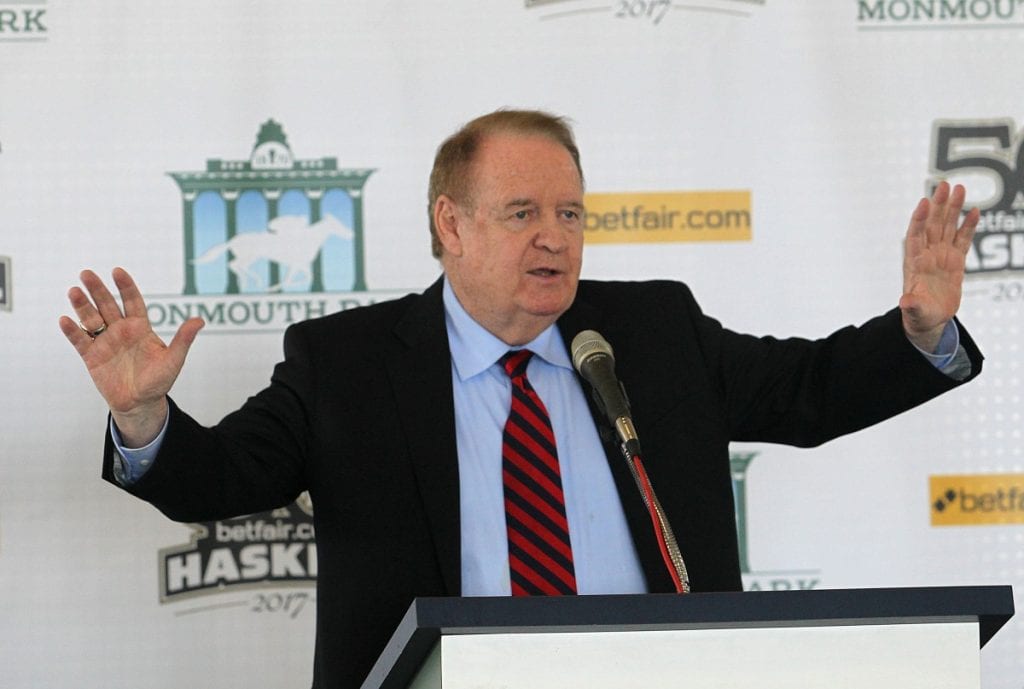 After spending the better part of the last five years waging battles with state and federal legislators in an attempt to get both casino and sports gambling at Monmouth Park, Dennis Drazin is finally dealing with a harsh dose of reality.

Drazin and other spoke at Monmouth’s Opening Day press conference May 9. The actual opening day is May 13.

Drazin, an advisor to Darby Development LLC, which operates Monmouth Park on behalf of the New Jersey Thoroughbred Horsemen’s Association, Drazin knows that sports gambling won’t legitimately be on the radar at the track unless a current appeal to the United States Supreme Court succeeds — or Congress acts to overturn the Professional and Amateur Sports Protection Act (PASPA), which prevents all but four states from allowing sports betting.

Drazin noted that the Supreme Court had asked the Trump Administration’s solicitor general to weigh in on the appeal — which could benefit the effort. But, he added,  “We’re not that optimistic.”

But Drazin isn’t giving up hope just yet.

“The best hope is that there’s enough confusion from other states,” Drazin said. “Right now, there are 26 other states looking for legislation to have sports gambling. So we’re looking to have it clarified, whether it’s federal or state law.”

If the regulation of sports gambling is placed in the hands of each state, then Drazin can see his long-term dream finally coming true. For now, it’s on hold.

“We have a full appeal,” Drazin said. “We should know fairly soon. We’re hoping the Supreme Court takes it by September. It’s no longer a question of if, but when sports betting will come. Our efforts appear to have snowballed into a national movement, and now either Congress or the Supreme Court will have to act.”

Once and for all.

“We’re still confident that the first sports wager in New Jersey will happen at Monmouth Park in the near future.”

As for the state of thoroughbred racing in the Garden State, Drazin believes that the 2017 season, which opens Saturday for the 73rd straight year, will be an improved racing campaign from 2016. He certainly hopes so; last year saw total handle plummet by over 26 percent, and attendance also fell, by 9.2 percent, to a still-robust 8,833.

“It’s going to be an exciting season,” Drazin said.

Veteran jockeys Aaron Gryder, Joe Bravo and Eddie Castro are all returning to Monmouth to race full time this season. It’s the first time Gryder has been back since 2005. A winner of more than 3,000 career races, Gryder was aboard Well Armed to win the 2009 Dubai World Cup. Gryder has captured riding titles at Churchill Downs, Aqueduct and Arlington Park.

Paco Lopez, who has won the last five riding crowns at Monmouth, returns for another year.

Main Sequence will be added to the Monmouth Park Hall of Champions Saturday. A four-time graded stakes winner on the turf and the 2014 Eclipse Award winner for champion turf horse, Main Sequence kicked off his Eclipse campaign by winning the Grade 1 United Nations at Monmouth Park. Retired from racing in 2015, Main Sequence won nine times in 21 career starts and earned $3.4 million. 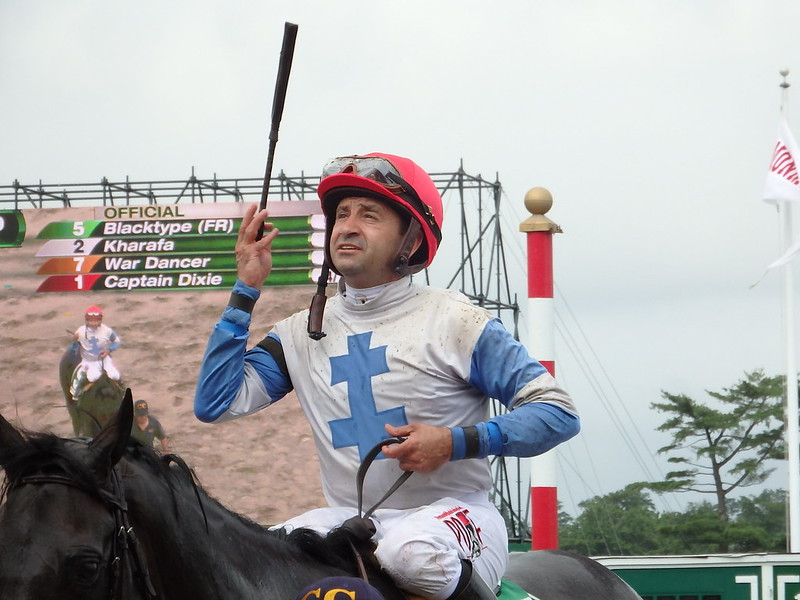 Jersey Joe Bravo returns in 2017. Photo by The Racing Biz.

Drazin said that the track’s exchange wagering program, managed by Betfair, is “growing.”

Darby has run Monmouth Park since 2012, succeeding the New Jersey Sports and Exposition Authority. That’s when outgoing governor Chris Christie (R) decided the state needed to get out of the horse racing business.

The upcoming gubernatorial election may benefit the track’s future. While Christie was opposed to any state subsidy to assist the track — bowing to the wishes of Atlantic City casino operators — the front-runner of this November’s election, Democrat Phil Murphy, is supportive of horse racing. Other states in the region have purses bolstered by revenue from slot machines and other gambling.

“Going forward, we’re going to need the help of the politicians,” Drazin said. “We all have to work together to keep Monmouth Park alive. Monmouth Park is a beautiful place. We are working to preserve it.”

All of this, Drazin said, makes it tough on the state’s breeders.

“It’s not easy to breed a horse in New Jersey,” Drazin said. “It’s fallen apart because of a lack of funding. We have to act as one to save the industry. It’s important that we all work together to make sure we survive. We took over in 2012 and many are surprised that we’re still here. But we had to tighten our belts. Getting everyone to work together, is it easy? No. But here we are, six years later. We’re still here and still strong. I’m going to do my best to preserve Monmouth Park. New Jersey should never lose horse racing.”

Former New Jersey Gov. Richard Codey was on hand to show his support.

“All the money in racing is going to Aqueduct, Belmont, Yonkers and Pennsylvania,” Codey said. “We’ll have a new attitude in Trenton that’s all in about racing. I see some light at the end of the tunnel.”

Drazin is also optimistic because of all the different amenities that will be offered at the track this season.

“We are looking to increase our revenues in non-gambling businesses,” Drazin said. “Over the last few years, the biggest complaint we’ve received has been about our food. The complaints have been constant. We realized that there are a lot of foodies out there. We’re changing the food culture.”

There are some new concession stands, including Max’s Famous Hot Dogs, which has a permanent location in nearby Long Branch that was visited by Hall of Fame trainer Bob Baffert on Haskell day. Now, Baffert can get his favorite hot dogs at the track.

Strollo’s Lighthouse Homemade Italian Ice, a Jersey Shore favorite, will also have a stand on the first floor of the grandstand.
The Jersey Shore Food Truck Festival is scheduled for Memorial Day weekend with 40 different gourmet trucks on tap beginning Saturday, May 27 through Monday, May 29.

“I’m impressed with the improvements made in the food,” Drazin said. “Of course, we want to preserve our world class racing.”

The Monmouth Park meet, 50 days this year, down from 57 a year ago, runs from Saturday through Sept. 10. The 50th running of the Betfair.com Haskell Invitational will take place Sunday, July 30.

“I can assure you that the Monmouth Park team is committed to preserving racing in New Jersey now and forever,” Drazin said.