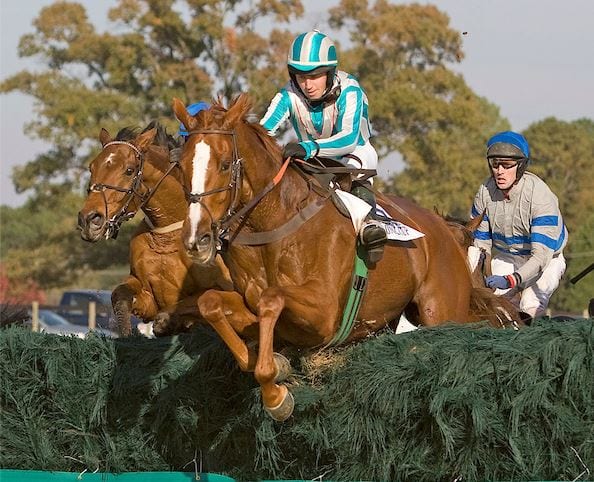 The selections were made by a committee of Maryland racing industry members coordinated by the Maryland Horse Breeders Association (MHBA) and Maryland Racing Media Association (MRMA).

Good Night Shirt went from modest winner on the flat to a two-time Eclipse Award winner over jumps, recording 10 graded stakes wins, including eight Grade 1s, and earning $1,041,083. From the summer of 2006 to the spring of 2009, he made 14 consecutive graded starts and won 10 of them – including a streak of seven in a row – and accounted for back-to-back runnings of the Marion du Pont Scott Colonial Cup Hurdle Stakes-G1, Lonesome Glory Hurdle Stakes-G1 and Iroquois Hurdle Stakes-G1. Only the third steeplechaser in history to surpass $1 million in career earnings, he was the first steeplechaser to be named Maryland-bred Horse of the Year (2008) and was state-bred steeplechase champion four times (2006-2009). Bred by Dr. and Mrs. Thomas Bowman, the chestnut son of Breeders’ Cup Classic-G1 winner and 2014 Maryland-bred Thoroughbred Hall of Fame inductee Concern and the Two Punch mare Hot Story was owned for the majority of his career by Harold A. “Sonny” Via Jr. and trained by Jack Fisher.

Deputed Testamony became a hometown hero when he captured the 1983 Preakness Stakes for the Boniface family, who bred the colt and co-owned him with Francis P. Sears in the name of their Bonita Farm. The Boniface family also stood the classic winner’s sire. J. William (Billy) Boniface trained the son of Traffic Cop—Proof Requested, by Prove It, his entire career in which he had 11 wins from 20 starts for earnings of $674,329.

Raced from 2 to 4, Deputed Testamony won seven stakes, with additional graded wins in the Grade 1 Haskell Invitational at Monmouth and Bowie’s Grade 3 Governor’s Cup Handicap. He still holds the track record at Pimlico for a mile and a sixteenth (1:40.80) which he set in the final start of his career, the 1984 City of Baltimore Handicap on that year’s Preakness Day card, and at 2, he set a one-mile track record at Meadowlands. He was named Maryland-bred champion 3-year-old in one of the most accomplished classes of Maryland-breds in history, earning the title over fellow Maryland-bred classic winners Caveat (Belmont Stakes) and Shareef Dancer (Irish Derby).