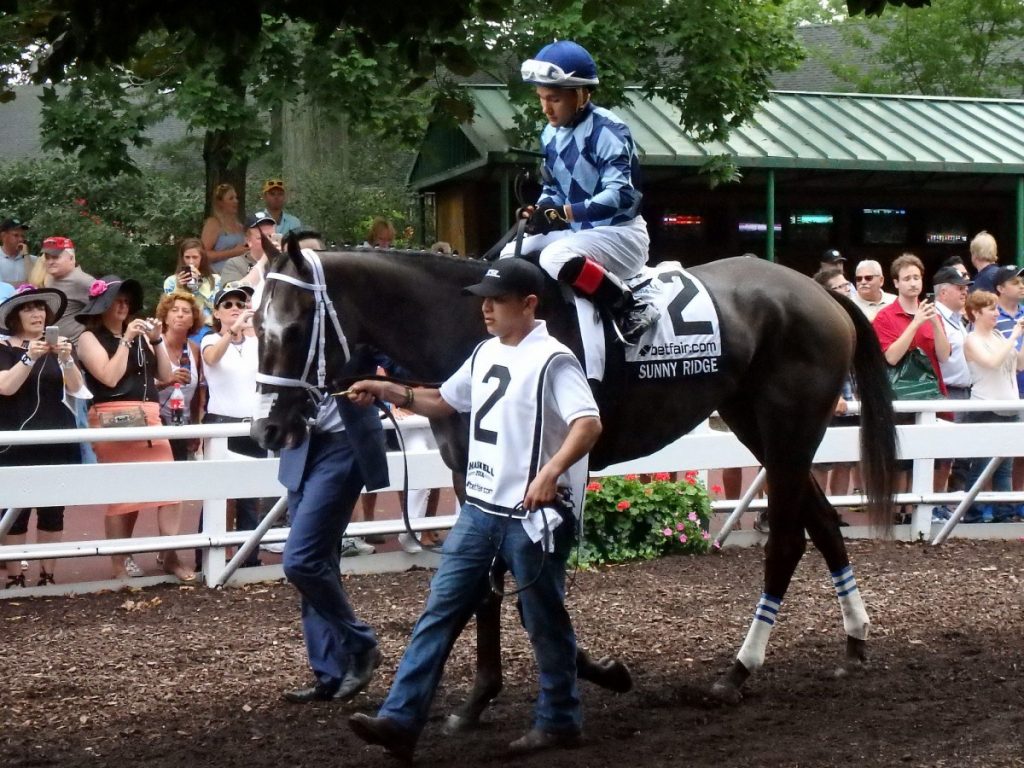 Sunny Ridge before the 2016 Haskell. Photo by The Racing Biz.

Born in the West Virginia town that’s been home to Charles Town Races since 1933, Servis grew up in a racing family, about a furlong from the track’s main gate.

“We lived in a trailer park on the other side of the fence,” recalled Servis. “Then Dad (Joe Servis) built a house and we moved there. Dad was a jockey and he won the first race ever at Charles Town, and later he was a West Virginia state steward. So you could say I cut my teeth at Charles Town.”

Jason is the older brother of John Servis, who won the 2004 Kentucky Derby with Smarty Jones. His sister, Laurie, is married to trainer Eddie Plesa. Jr., who summers at Monmouth and winters in south Florida. Another sister, Jodie, was a pari-mutuel clerk at Charles Town for many years.

As boys, Jason recalled, he and John would play in a farmer’s field near their home, trying to rope Shetland ponies and ride them. They would also sneak onto the racetrack property and take coins out of the fountain, before getting chased out by a valet.

“I guess he thought we were taking his tip money,” said Servis with a laugh.

From the time he was very young, Jason Servis wanted to be a jockey like his father. At age 15, he was able to ride at old Shenandoah Downs and in hunt races at Emerald Downs in Ruby, Virginia. Emerald, Servis said, wasn’t a recognized track, with only a trailer for the jockeys’ room and no wagering.

Joe Servis insisted that his son get his high school diploma before embarking on a full-fledged career in the saddle, which he did upon graduation at age 18.

“But I wasn’t allowed to ride at Charles Town, because Dad was a steward,” he explained. So he rode at Waterford Park (now Mountaineer Park), at Thistledown, and then eventually Monmouth Park, but he was fighting a losing battle with his weight. That’s when he decided to become an exercise rider and an assistant trainer to Peter Fortay, as well as taking a job in the Monmouth jockey’s room as a valet beginning in 1975.

For the next 20 years, Servis worked mornings on horseback and afternoons as a valet, which helped support his family. His official transition to trainer happened in 2001.

“Mr. (Dennis) Drazin asked me if I wanted to take some horses for him, and I took out my trainer’s license,” said Servis. “I won with some horses for him in New York (his first winner was Hattab Be You at Aqueduct in 2002) and then (the late) Jimmy Croll sent me one, and I won with that horse, too. From there, it just snowballed and I started picking up more clients and winning more races. It was an easy transition for me.”

It was for Drazin, a Red Bank, N. J. attorney and legal counsel for Darby Development, which operates Monmouth Park, that Servis saddled his first stakes winner, Tempest Fugit, who won the 2002 Oceanport Handicap at Monmouth.

Drazin and Servis have maintained their working relationship since then, with Sunny Ridge perhaps the best horse yet.

Sunny Ridge, a homebred for Drazin and a son of Holy Bull (trained by Croll), won the Sapling Stakes as a 2-year-old at Monmouth. He also ran second — beaten by a neck by Exaggerator — in the Grade 3 Delta Downs Jackpot at Delta Downs, a bullring like Charles Town.

Last year won the Gr. 3 Withers Stakes and was third in the Gr. 1 Haskell Invitational, his home state’s biggest race.

This year, as a 4-year-old, the New Jersey-bred gelding captured a pair of New York stakes, the Jazil and Stymie, prior to the Charles Town Classic.

Servis said he expected his father, now 85, and mother to be in attendance for the Classic. Joe Servis, he said, was the reason he became involved in the sport, as he laid the foundation for the family, stressing hard work. To win the race would be an emotional experience.

“I honestly can’t describe what it would be like,” he said. “I probably wouldn’t cry right after the race, but I can’t make any promises for later that night. It would be incredible.”