For Charles Town trainers, a chance to tackle the best 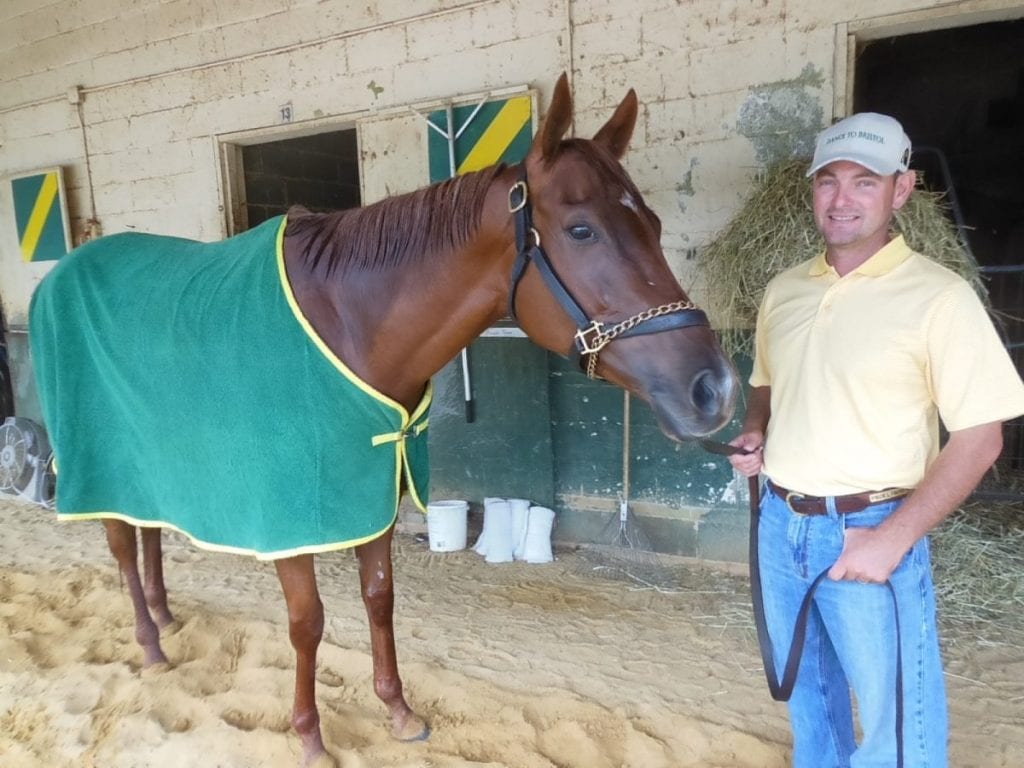 Ollie Figgins Dance to Bristol in 2013. Photo by The Racing Biz.

The public’s attention In Saturday’s $100,000 Sugar Maple Stakes and $85,000 Robert Hilton Memorial, both on the undercard of the Grade 2, $1.25 million Charles Town Classic, will focus on several invaders.

But don’t sell the locals short.

Saturday’s ninth race is the latest renewal of the $85,000 Robert Hilton Memorial Stakes for three-year-old colts contesting the two-turn distance of seven furlongs. Among the likely contenders are Joe Sharp trainee Cool Arrow, a Triple Crown nominee and hero of the $300,000 Springboard Mile at Remington Park last fall; Power Walker, a son of Stroll who graduated in his most recent outing at Delta Downs for trainer Tom Amoss, who has enjoyed ample success in his brief ventures to the Jefferson County oval; and Doug O’Neill’s Farley, who has made six of seven career starts on the turf and has just a maiden win to his name.

Among those looking to topple them are a pair of trainers who have eerily similar career numbers and have both also enjoyed plenty of success over the years at Charles Town: Ollie Figgins, III, and Damon Dilodovico. Figgins, who will saddle Poseidon’s Prize for the Hilton, owns 684 wins and $14 million in purse earnings from 3,948 starters through Thursday, while Dilodovico, who will send out Liar’s Dice, has saddled 639 winners from 3,437 runners with earnings of nearly $13 million.

Poseidon’s Prize, a homebred son of Pure Prize trained by Figgins for owner-bred E. Clint Lowry, has won three of five starts over the strip including a handy, seven-length victory in a two-turn allowance for state-bred male runners here earlier this month. Poseidon’s Prize finished fifth, beaten six lengths in the Miracle Wood Stakes at Laurel Park in his lone venture outside the oval, has won two of three starts at the distance locally and was fifth in the West Virginia Futurity in his career debut last fall.

“I thought he ran a tremendous race last time out,” Figgins said. “He really wasn’t cranked up for a big effort. He had a minor foot abscess that cost him two weeks of training, so he probably really wasn’t tight for that race and he ran really well that night. I’m glad to have the rail, especially going two turns. He’s got plenty of time to settle just off the speed. He came out of that last race in really good shape and he’s been training great since then so I’m looking forward to seeing how he does against those other horses coming in from out-of-town.”

The Hilton will mark the local debut for Liar’s Dice and his first try around two turns, but Dilodovico expects the Candy Ride gelding to make a smooth transition to both. Claimed for $25,000 last fall at Laurel, Liar’s Dice has already made four starts this year for Dilodovico and owner Big Bertha Stable, including a second-place finish to next-out stake winner Recruiting Ready in a six-furlong allowance before splashing home to a five-length allowance score late last month at Laurel.

“When we claimed him, he was definitely a big, immature horse,” Dilodovico said. “We just let him mature and his behavior eventually caught up with his body. He’s a really nice-looking horse. Normally when we would run Immortal Eyes or Love’s Strong Hart at Charles Town going 4 1/2-furlongs, we had to sharpen them up a little bit. But this horse has plenty of natural ability and he’s stretching out to seven furlongs, so I think he will handle the extra distance and the two turns just fine.”

One race later in the $100,000 Sugar Maple Stakes for fillies and mares at the same, two-turn, seven-furlong distance, trainer Jorge Navarro will saddle Mia Torri while trainer Todd Pletcher is sending Kinsley Kisses. Both fillies have ample stakes experience and will vie for favoritism.

Mia Torri was most recently fourth in the Grade 2 Inside Information at Gulfstream Park after winning the $100,000 Sunshine Millions Distaff there. She was a sharp second, at 15-1, in last year’s Grade 3 Charles Town Oaks here. Kinsley Kisses won her seasonal debut against allowance foes at Gulfstream and has placed in three Grade 3 events.

But local conditioners Ernest Haynes, who will saddle Lake Ponchatrain, and Russell Davis, who will send out Riveter Gloria, are both eager to see how their mares will fare against their higher profile rivals.

Lake Ponchatrain has won both of her starts this season, capturing a local two-turn handicap in January before traveling to Mahoning Valley in Ohio to prevail in an open allowance.

Riveter Gloria owns a 6-3-9 slate from 27 career outings, all at Charles Town, and rebounded from a fifth-place finish behind Lake Ponchatrain to capture a two-turn allowance last month.

“Well, it’s not like they’re going to put me and Todd Pletcher in the gate and see who wins,” Haynes joked. “It’s up to the horses. My mare is coming into it great. She won her last start up at Mahoning Valley in the slop against open company and she won that Handicap here before that in the mud. When I claimed her [for $25,000 off trainer John McKee] last October, she was always breaking last. She normally spotted her foes five to eight lengths at the break. I thought there were a few things that I could correct with her and she’s really improved.”

Davis expected several prominent barns to send horses for the Sugar Maple, but believes his mare is heading into the open stakes in good form and will break from the rail in the two-turn affair.

“Anytime you put up $100,000, somebody’s going to come from out-of-town,” Davis said. “It’s not going to be easy. My mare has plenty of early speed. They’re going to have to come and get her at some point. Whether she’s going 4 1/2-furlongs or a mile and an eighth, she’s going to the front. She just has that much natural early speed. Maybe we can get loose on the front and they won’t be able to catch her. She’s doing really good, so I’m glad to be in there.”